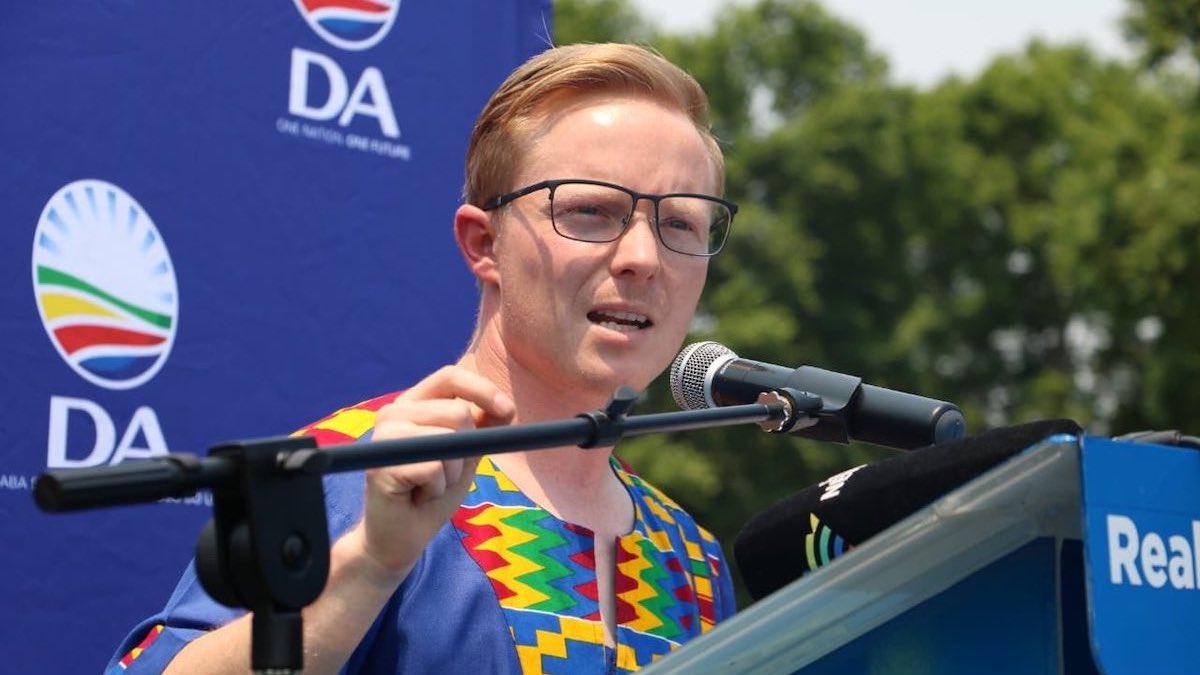 One of the biggest shocks of South Africa’s local elections in November was the victory by the Democratic Alliance in the 67% Zulu-speaking, previously ANC-supporting uMngeni municipality. The surprise victory – the DA’s first in KZN – owes much to the efforts of multilingual Chris Pappas who, although only 30, is already something of a veteran at the DA. Pappas, born in Mooi River and the son of KZN Midlands farmers, describes himself as pragmatic but also “a hopeless idealist”. He may well reflect a political future few South Africans believe possible. Here is his unlikely story.

Chris Pappas on getting into politics through academic affairs

I started off with COPE. How that worked was that we built an environment society. There was no society or faculty house for architects, construction engineers, real estate and town planners. We were hanging there and engineers were doing their own thing. We were tired of them telling us what to do. We started our own faculty house and I got drawn into COPE. They saw me there and drew me in as a member and as a candidate for the Student Representative Council. I was elected there on a coalition council between ourselves, the DA’s student organisation. There were a couple of others and I was placed in the position of academic affairs, so I was there to look after the academic affairs of students on campus. That ended around the end of 2013, the beginning of 2014 when I got my first job in the private sector. I then went over to the Democratic Alliance as a staff member. So, I didn’t start in the DA as a politician, but as a staff member, having run campaigns as a student on campus.

On accepting a job offer in KZN

I was in a job I wasn’t really happy with. Morally and ethically, to be a development economist, you get sent on an assignment. Someone wants to build a power station, they send you to do an assessment, and you come back with the assessment that reveals they are destroying farmlands and the environment and your boss says, “Yeah, we know that, but we’re not being paid to say that, we’re being paid to put it a different way.” So, I was unhappy with what I was doing. I always enjoyed the administrative and campaign side of politics. When I saw a job opportunity come available, I applied for it and I got accepted to two positions; one was in KZN and the other was in central Johannesburg working with all the universities, including the Democratic Alliance. But KZN poached me and offered me a better salary because it was home and I could speak Zulu.

I grew up in the rural areas, there weren’t many people to speak English with. A lot of my friends growing up spoke isiZulu and they didn’t have access to English. It was either sit there and pretend like no one knows what’s happening or just immerse yourself and learn. People often ask, how did I learn? I said, well, I didn’t. There is no particular time that I sat down and learnt isiZulu. It was just a matter of the people I grew up with.

On the DA granting young people opportunities in politics

We have always had this viewpoint of fit for purpose. That being said, if you are capable and able to do the job and you are the best person for the job, then you should be given that opportunity regardless of age, race, gender, whatever it might be. That breaks down the barriers of entry from the beginning. The mayor of Mogale City – that’s Krugersdorp area – is 32 and he is an executive mayor. The mayor of Cape Town is 34. The mayor of Midvaal is just under 40. There are a lot of young mayors and young people in parliament; a lot of young people, in legislatures, who are the best people for the job. A lot of the time, we come qualified as well in terms of skills and experience and those sorts of things. It is great to be able to be an organisation where you can apply knowing that there isn’t this hurdle to get over, that you are too young or too female or whatever it might be. That’s a great opportunity for us as well.

On restoring faith in the political sphere

It is home. This is where I grew up. When you grow up in a place and see it slowly decline; the people who you grew up with and particularly young black people I grew up with, their opportunities are far from the same as mine. When you see blatant corruption and mismanagement of small things that then lead to deeper poverty, deeper suffering, and businesses closing. Someone had to do something about it. I wanted to be that someone. I wanted to be part of making things better, no matter how difficult it was. It is one of the reasons why I moved from the administration of a political party to the political side of a party. Even internally within the DA, you see things you think can work better or do better and you want to change those things because, as politics works better, the country works better regardless of how many people are out there saying politics is the problem. Politics is also the solution. Unfortunately, you can say you are not voting for a politician or you’re standing as an independent, but as soon as you are in the system, you are a politician of some kind. That only works if the politics of the country works and I wanted to be part of that change.

When I first went into politics on the Student Representative Council, I didn’t know much about politics. My parents were farmers out in the middle and I’m the first politician in my family, in the country. So, this is new for me. But I got into a position where I could actually change people’s lives. From the simplest thing; I worked to extend bus routes for students, made sure the library was open longer so that students could study and didn’t have to go back and sit in the dark, extending Wi-Fi coverage. You realise that if you use a position of power or influence for what it is meant for, you can effect [real] change in people’s lives. I think this is where people have lost faith in politics; so many people who sit in positions such as mine – whether on purpose or just through lack of capacity or nefarious motives – have degraded the system to a point where people no longer have faith in it. One of the things I want to do is rebuild faith in the political institution and the system of democracy that your vote can bring change.

On the strategy to becoming mayor of the uMngeni Local Municipality

There was a motto that I got my team to adopt during the election, and that was: ‘We’re not doing this for status, we’re doing this for sacrifice’. There was always a belief that win or lose, this is not about us, it was that we would control the levers that could change people’s lives because there is this belief that all politicians are the same as the president or we are all the same as the movie stars we see; some guy comes along in a black car, gets out, waves a wand and everything’s changed. In actual fact, in many communities, the councillors, mayors and people like that are members of the community. We want to see things work.

I can promise you, it is much easier to fix the potholes than have to explain to people why the potholes aren’t fixed. Deep down, I am a hopeless idealist but I’m also a pragmatist and a realist to know this is the dream. To get as close as possible to that, these are the steps we are going to have to go through, and these are the challenges we’ll most likely face.