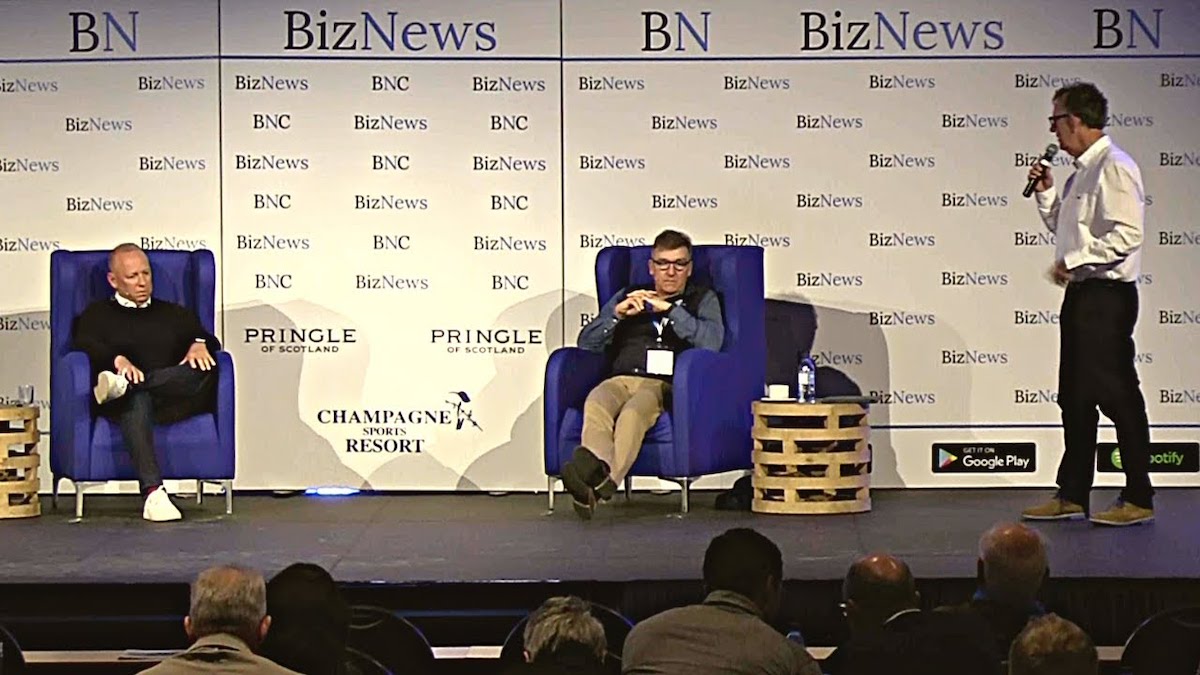 A must watch investment debate between master fund managers Cy Jacobs of 36ONE and Piet Viljoen of Counterpoint at the BizNews Conference #4. Topics under the hammer included differing investment principles, performance fees and how to position your portfolio post-2024.

Piet Viljoen on what stocks would go into the 2024 portfolio

Something like CMH springs to mind, which I mentioned earlier. I think the banks will do fantastically well. I think one of the things that is holding back the banking sector as a whole is there’s no risk appetite in the country. People aren’t borrowing money to invest, to build things, to make things. So the banks aren’t lending out money. And the lifeblood of profitability for a bank is credit. They’re not accredited to extend. And they’re not extending very much at the moment. So the banks will do well because I think such an outcome, if that were to happen, would cause investment flows into the country. A lot of that would be financed by the banks and I think it would be great for them. So probably thinking aloud, I think the banking sector would be probably the biggest one.

Cy Jacobs on the ESG process

ESG is an interesting one. I mean, obviously, we have as Piet does, a full ESG process. I mean, many institutions are demanding of you on a daily basis to prove we actually measure all our engagements on our online tracker to see exactly how many of our engagements include anything to do with ESG. The truth of the matter is, the world has put ESG, you know, too fast, too quickly into the investment regime. And you can see what’s happened when something you know, when we stop investing, for example, in dirty oil, dirty or coal, I mean, we now run with one little political event or a huge actual political event of Russia invading Ukraine. And the entire European community is without proper oil reserves, without proper, you know, alternatives, because it was all too fast, too quick, and the implications were never properly considered. So I think the world’s going to have to revert back. And if you look at Piet’s main two stocks, he’s done so well in the last couple of years. They are not exactly ESG favourites, but they were and are the correct place to be invested. So, you know, it’s a tough one. And we looked at institutions and I suppose they’re looked at by their ultimate investors, as you know, are we doing the right thing for the environment and the future of our children But the truth is, it’s often the antithesis to what investment returns are going to look like.

I think there’s an opportunity to invest this year where I think there is too much money in the big fund managers in South Africa and globally, as well. Not only have the big fund managers too much money and they are like the index minus fees, so you’re guaranteed to underperform, whereas you can rather put your money into the index with the bulky money index and choose a couple of smaller fund managers and a couple of other to do different things and add that you’ll get index plus. That’s a much more sensible way to think of allocating money than giving it to the Big Three because the ads are nice and make you feel comfortable and warm and fuzzy.

Cy Jacobs on what investors are doing for the country

We have a lot of social programmes, actually. It’s interesting enough because we don’t agree with the way BEE’s being carried out in South Africa. I’m sure Piet would probably agree with me as well. But we’ve invested in anyone who’s happy to approach me one on one. I’m happy to discuss in a big forum, serious amounts of money in various different programmes, from education to sport to various initiatives during COVID, helping feed, you know, in many cases, tens of thousands of people. So we’ve invested a lot of money in South Africa in our own initiatives. It doesn’t unfortunately count for anything in business. But on a personal level, we have private equity, which I’m happy to discuss with you as well. We’ve done a lot and it’s not in 36One public funds, but we have a responsibility. And within our own firm we’ve got a culture of helping previously disadvantaged individuals.

We also have bursary programmes. We have a traineeship programme. You know, we took a guy recently off the streets who emailed us, an engineer who had a passion for markets. We’ve grown him within our firm to become a trainee analyst. We’re doing it the way we think is right in South Africa. And we’ve had a pretty broad reshuffling overall. And that’s our goal. People who know me in this room will know I’d like to support many types of charities and give back to South African ones.

It’s a big challenge. I mean, the term hedge funds globally, we’ve seen the likes of Bernie Madoff over the years and hedge funds on a global scale are defined very differently to how they are regulated here in South Africa. So for those of you who don’t know about hedge funds overseas, it can be in anything. You can be in geared agriculture, in cows, you know, or anything. It’s just so broad. But African hedge funds are very narrow in their investment capability and they are very highly regulated. And in our space, in the equity long, short or the equity market neutral have significantly less risk than pretty much all. And we’re talking about our own products, less risk in our balanced funds, less risk in our flexible funds, less risk than all our equity funds that are our lowest risk products and what we have started doing, which is interesting to a lot of IFAs around the country. We’ve started running hedge fund 101 workshops, so we’ve brought people in from the outside – the difficulty with that obviously is not all hedge funds are the same either, in South Africa. So even in South Africa they are different risk hedge funds. But as a general classification and if it’s run correctly, it should be far less risk and I suppose it just requires time and education to try and show people exactly what you do. The problem often is the complexity. When you start bringing in derivative structures and all these other shortings, for example, and people can’t get to grips with what is a short sale and how that operates.

In my view is that they will struggle to unlock the value, because the only way to really do it is to unbundle Tencent completely. And I don’t think they are ready to do it. They also need to stop investing in all these money losing ventures – many of them have no payoff profile eventually. So the market will continue to penalise them for that. And, you know, I think the structure is just very complicated – shareholdings are terrible things to try to unwind. But they’ve spent themselves into a corner and it’s a very hard corner to get out of. I can’t see them doing that with the current team in place, it’s virtually impossible. So I think the discount will stay at the 30, 40% level for as long as the current structure is in place because there’s no incentive for these guys to get the current structure fixed.

I’ve been part of building businesses in South Africa for 20 years and we’ve just been part of a business that’s been built over the past seven years, a significant retailer built by young people. And it’s very successful and continues to grow quite rapidly. And it is an amazing success story. I don’t know if any of you know of Safari Outdoor or Outdoor Investment Holdings. That is a great business that’s been built over the past seven years effectively. And there’s many, many such stories. I think, with the absolute dearth of available capital in the country, because everybody’s capital is going offshore or being given to the large fund managers, guys who just invest in Anglo-American and one or two other stocks like Naspers, the dearth of capital available creates massive opportunities for anybody with a little bit of capital and a little bit of initiative. The complete collapse of government services creates massive opportunities to supply those services to a market that needs them and is willing to pay for them. So I think in a country like South Africa, there are massive opportunities. One just needs a bit of fortitude in dealing with incompetent government and that sort of thing, but the opportunities are there, no doubt about it.