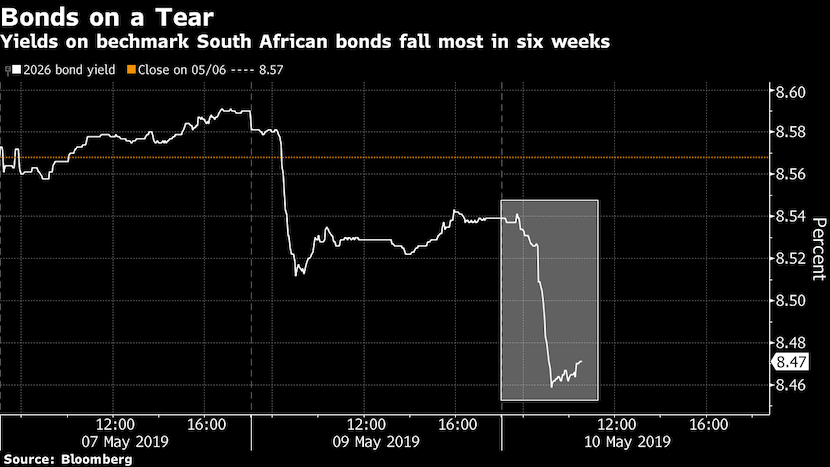 The rand advanced for a fourth day and yields on benchmark bonds saw their biggest drop in six weeks as the ruling African National Congress headed for a victory margin that will strengthen President Cyril Ramaphosa’s hand as he pursues reforms to revive a flagging economy.

With 80% of the ballots counted, the ANC has about 57% of the national vote. A win of between 55% and 60% is expected to boost Ramaphosa’s position within the party and his ability to implement key changes.

Here is how the reform optimism is playing out in markets:

The rand has moved below its 50-day moving average and is making a charge at its 100-day moving average too. The 14.25/USD level is critical, says Matete Thulare, an analyst at FirstRand Bank. If the rand sustains a break below that level, the next target is 14.05. The currency was trading 0.9% firmer at 14.2154 per dollar by 11:12am in Johannesburg.

South Africa’s benchmark FTSE/JSE Africa All Share Index is gaining for the first time this week. The gauge rose as much as 1.7% on Friday, the steepest one-day jump since Jan. 9.

The cost of insuring South Africa’s government debt against default fell for the first day in four and was trading at 187 basis points.