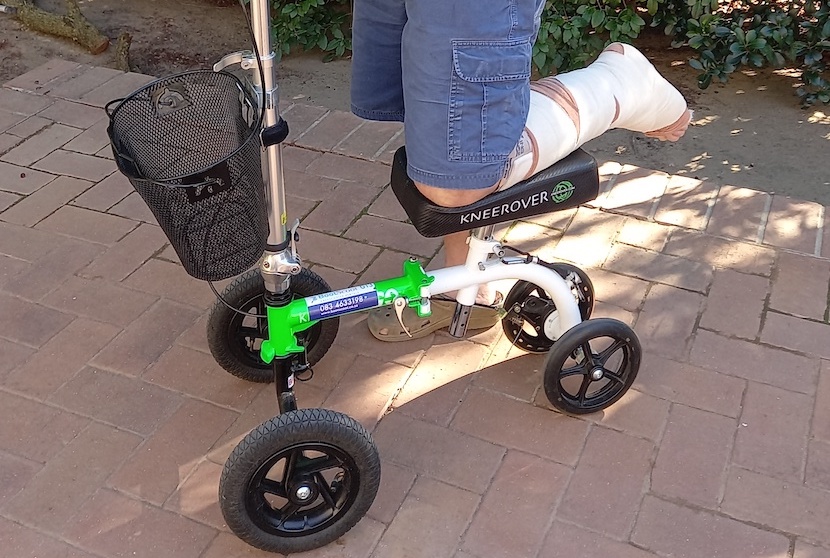 The article was first published in the Tygerburger.

Sometimes the solution to a problem can be so elegantly simple as to be breath-taking.

While politics, especially those involving equity, can get messy very quickly, healing bodily injuries shares one universal principle that politicians could note, and that is to; ‘first do no harm.”

I did myself a debilitating injury racing my teenage daughters on Betty’s Bay beach recently. No surfers protesting silly Covid-19 beach ban rules or waving posters against seismic blasting off the Eastern Cape, just a perfectly undisturbed beach day. That is, until I snapped my Achilles Tendon. A fun challenge racing my wife over a roughly marked 100 metres, ended in narrow victory for me. The less fun part came when I challenged with my teenage daughters to a second dash – which ended 20 metres out as I put on a spurt to keep up. Not so much painful, as debilitating. Giggling, my family shouldered me hobbling back off the beach to the cottage, me shaking my head ruefully.

On the Monday came an operation to reconnect the tendon in Durbanville MediClinic. Then the real “fun” began.

Crutches, first patented in 1917 as a basic walking stick with an upper arm support, were essential, but I soon realised that with dodgy shoulders, I’d struggle. After two days of hopping around, they were starting to hurt, as was one hip. So, I did what everyone does these days – I put the problem out to friends on the internet. As so often happens, the tribe responds, in this case my fellow journalists.

Behold, those who’d travelled this route declared, The Knee Scooter. And they raved, not a common occurrence among professional cynics.

I cast about and found www.kneescooter.co.za, a knee scooter outfit based in Cape Town with an outlet in Camps Bay. According to an article published in the British Medical Journal in 1986, researchers found depictions of the knee walker ancestors on vases dating back 2,400 years, as well as in paintings from the 15th and 16th centuries. I, (like so many others I’ve since discovered), was a bit behind the curve. In fact, until an engineer in the construction industry came up with a commercially viable lightweight collapsible version to help out a friend with an injured Achilles tendon 14 years ago, the invention seemed to have slipped from modern view.

You put your knee on the padded cushion and scoot about the house, veranda or shopping mall, hands free to do whatever domestic task you choose. Flat surfaces recommended, with the all-terrain model the pick of the bunch, though less collapsible for easy car transporting. Just to be clear, this is the foot-propelled model, very affordable at around R400 per week (with a refundable deposit). It has transformed my life. Medscheme apparently cover it, but not Discovery as far as I can tell. Little did I know – and I suspect many people are equally unaware of this amazing mobility device, hence this article. I’ll see if I can persuade Discovery Health that it’s a ‘shared value’ item that would save them, (and me,) a fistful of money in avoidable orthopaedic expenses down the line.

I believe it’s the kind of precedent they should consider if they’re serious about saving themselves more money. More importantly though, my quality of life is immeasurably improved. I’ll just have to stay off it over braai time at weekends and not be tempted to visit the neighbour for a couple of drinks. “Drunk in charge of a knee scooter” is not my idea of a fun day in court.