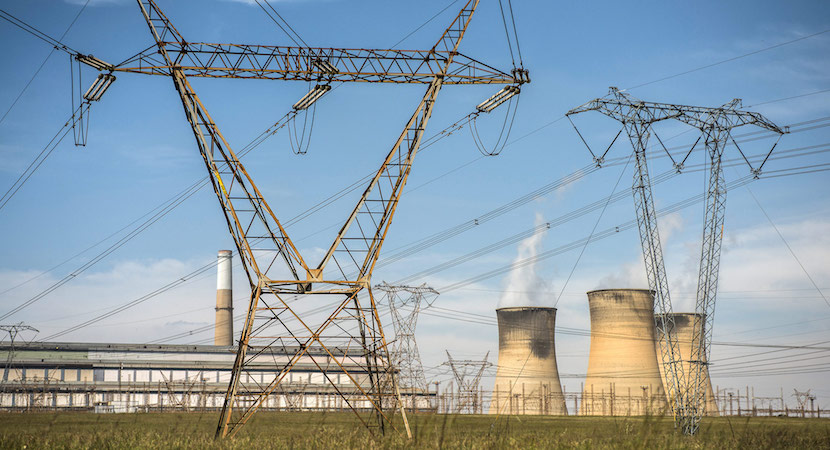 JOHANNESBURG — We’ve experienced 7 days of load shedding now. It’s a pretty pathetic and dismal situation. And many South Africans are gatvol of Eskom and the sheer incompetence that surrounds it. In many ways, Eskom is totally in a death spiral as its plants have been poorly maintained and its reliance on dirty coal have become almost fatal. If the government knows what is good for itself and the South African economy, it would put Eskom ‘down’ now and break it up, selling its parts to private players. Those private players can then install more solar and wind installations and probably create a multi-billion dollar industry that generates massive tax revenue while providing 24/7 power generation. We can only but dream… – Gareth van Zyl

By Paul Burkhardt and Antony Sguazzin

And the Johannesburg-based company now poses the biggest credit risk to Africa’s most industrialized nation, according to S&P Global Ratings.

More than a decade of unreliable supply and surging prices are driving consumers and businesses off the grid as the price of renewable energy drops, leaving Eskom with lower sales and high fixed costs due to the expense of building new power plants.

The company that supplies 95 percent of South Africa’s electricity is losing middle-class clients, while arrears from near-bankrupt municipalities climb as many customers in impoverished townships don’t pay their bills or steal power through illegal connections. Rampant corruption and a bloated workforce have pushed total debt to 419 billion rand ($30.8 billion), and sales volumes — already at a decade-low — are falling, according to interim results reported last week.

“Eskom’s inability to supply electricity and the ever-increasing prices have provided an incentive for users to replace inefficient equipment” and shift to solar panels, Elena Ilkova, a credit analyst at Rand Merchant Bank, said by email. This “will leave Eskom to supply increasingly higher-priced electricity to consumers who can barely afford to pay and many more consumers who either can’t or will not pay,” she said.

We can stop load shedding in 90 days if 1) Eskom signs all the approved deals by Independent Power Producers and 2) Businesses take load off the grid by partially relying on solar. The new investment would also boost the economy and create jobs. Don't waste a crisis.

With elections about six months away, there’s likely to be little help from the state. On Dec. 1, Finance Minister Tito Mboweni said the government can’t afford any more bailouts and urged Eskom to go back to the bond market. Earlier this year, Public Enterprise Minister Pravin Gordhan intervened when a management plan not to increase pay sparked protests, boosting recurrent costs. Eskom will propose that the government absorb 100 billion rand in debt, Sanchay Singla, a money manager at Legal & General who attending a meeting with the company, said.

Going to the bond market is an expensive prospect. The premium investors demand to hold Eskom’s 2026 rand bonds rather than benchmark sovereign securities has more than doubled over the past five years to 124 basis points, even though the debt is government-guaranteed.

Similar to how a burgeoning customer base for telephones in Africa skipped the wait for landlines and started with mobile units, solar panels and other technology leave consumers completely disconnected from Eskom.

“Eskom prices have increased four-fold in nominal terms over the past decade,” said Anton Eberhard, a professor at the University of Cape Town’s Graduate School of Business. “And solar prices have fallen 80 percent since 2011 and 50 percent for wind.”

The company has publicly acknowledged this threat to demand.

Last year, Eskom bosses told the nation the power utility had so much excessive surplus that it would increase the export of its electricity with up to 8% in the next five years. What has since happened? There's certainly more to this load shedding than meets the eye

“As new technology allows self-generation to become increasingly price competitive for the consumer, a utility’s sales decline,” Eskom said in its 2018 annual report under the heading, ‘the utility death spiral.’

The cost of servicing Eskom’s annual debt has risen to 45 billion rand, equivalent to almost a third of South Africa’s welfare budget, while municipality arrears climbed to 17 billion rand from 13.6 billion rand in six months. The country has experienced seven consecutive days of rolling blackouts with Eskom struggling to pay for adequate plant maintenance. Khulu Phasiwe, a company spokesman, didn’t immediately respond to requests for comment.

Eskom has been its own worst enemy. In recent years it has, at times, urged consumers to switch to more efficient light bulbs and has subsidized the installation of solar water heaters. Rolling blackouts also reduce revenue. It boosted the number of people it employed by 46 percent over the last decade to about 47,600 without significantly increasing output. In March, Jabu Mabuza, the company’s chairman, said staff numbers will need to be reduced and it recently started talks to cut senior management.

Eskom’s announcement of a so-called turnaround plan has been repeatedly delayed and is now scheduled for early 2019.

“Eskom in its current format is unlikely to exist a decade from now,” Ilkova said. “The business needs to be reconfigured.”

That could mean breaking up its near monopoly over power generation and transmission.

“The only workable solution is to break up Eskom and to sell-off certain assets, such as the new mega power plants,” said Darias Jonker, an Africa analyst at risk-advisory firm Eurasia Group. “This latter option is particularly politically sensitive and is thus unlikely to happen. In short, Eskom is pushing the government toward a fiscal crisis either way.”