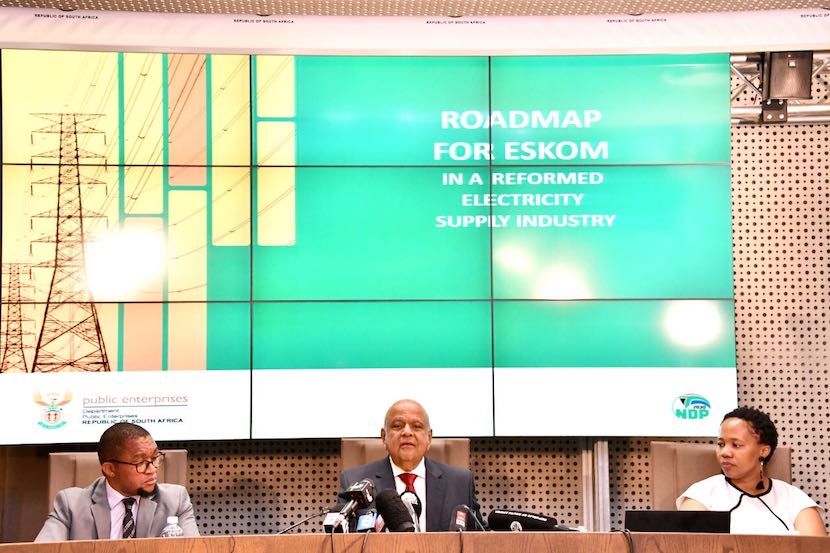 The weight of Eskom on our economy is like the world that the Greek god Atlas had on his shoulders. It was his punishment handed down by Zeus; in South Africa’s case it was a burden handed down to all of us by the Zuma administration. And if I can stick to the Greek analogy; it will take a Herculean task to lift that weight. Today, Public Enterprises Minister Pravin Gordhan unveiled his special paper to fix the debt-stricken power utility. The government hopes that its roadmap will put Eskom on a long-term sustainability path. It has been a long seven months since President Cyril Ramaphosa’s State of the Nation address when he announced that Eskom will be split into three entities. In that time South Africa again experienced power blackouts and Parliament approved a R59bn bailout to Eskom over two years. Ramaphosa and Gordhan were also fighting internal battles in the ANC-alliance particularly with the unions on their plans. Ramaphosa hopes that the Eskom roadmap will persuade Moody’s to keep its investment grade rating on Friday. The plan will end Eskom’s century-old monopoly of the electricity industry. – Linda van Tilburg

By Paul Burkhardt and Amogelang Mbatha

A policy paper released by Public Enterprises Minister Pravin Gordhan envisions Eskom Holdings relinquishing its almost century-old near-monopoly of the electricity industry. As a first step, its transmission unit will be hived off by March next year while remaining under the control of a state holding company, a move that will make it easier for private generators to supply the national grid.

Fixing Eskom “is a long protracted process, which has to be undertaken with discipline,” Gordhan told reporters Tuesday in Pretoria, the capital. “What we are clear about is that Eskom can’t remain as it is.”Eskom, which supplies about 95% of South Africa’s power and owes R450bn ($31bn), is considered the biggest risk to the national economy. While the government has allocated the utility R128bn in bailouts over the next three years, that won’t be enough to stabilise its finances because it isn’t generating enough income to cover its interest payments and operating costs.

Finance Minister Tito Mboweni is expected to outline broad principles for tackling Eskom’s debt when he delivers his mid-term budget on Wednesday, with more detail to be provided next week. The issue wasn’t covered in the policy paper.

A new chief executive officer for Eskom will also be announced next week, as will changes to Eskom’s board and an interim board of three to five members for the transmission unit, Gordhan said. The utility has been without a permanent CEO since Phakamani Hadebe quit in July and the post has been temporarily filled by its chairman, Jabu Mabuza.

Eskom will look to cut its cost of coal and diesel, and is trying to renegotiate contracts it concluded with independent suppliers of renewable energy with the aim of getting them to lower their prices, according to the policy paper. The utility is also looking at how it can utilise coal plants that are set to be decommissioned for other purposes, possibly battery storage, so they don’t have to be shut down completely, it said.

Eskom’s transmission unit, which has more than 5,000 employees and oversees about 45,000 kilometres (27,961 miles) of power lines, will be empowered to buy power both from Eskom and independent power producers. The utility’s power stations will be grouped into three clusters that will compete with each other – a reorganisation that international experience shows should encourage them to become more efficient and cut costs, Gordhan said.