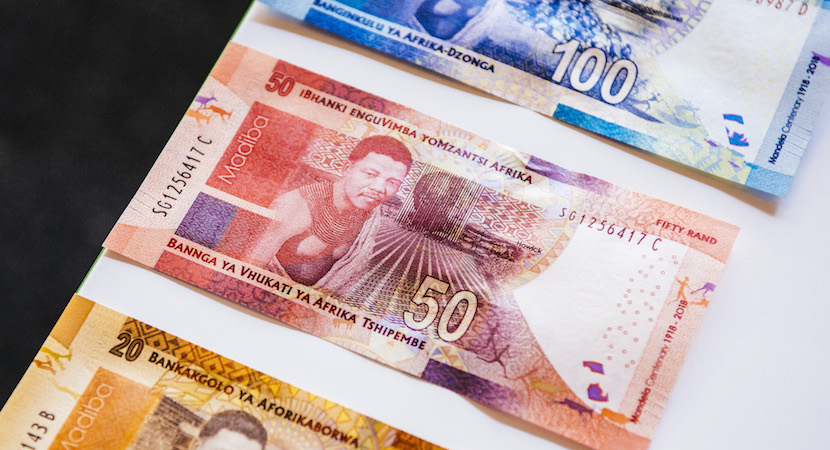 JOHANNESBURG — The rand makes up around 1% of the world’s daily currency trading, which makes it one of the most liquid emerging market currencies. Which makes it very susceptible to both global and local news. Emerging market currencies had a good rebound in September, with the rand gaining just under four percent, after a near 10 percent fall in August. October could see the rand give back these gains with two key events on the horizon. Consumers will be hoping Finance Minister Nhlanhla Nene delivers some positive aspects in the medium term budget, as it could hold the key to what Moody’s Investors Service delivers in its review, expected a few days post. Another petrol price hike in October sees it hit an all-time high, and with oil trading above $80 a barrel, a weaker rand will only make reviving the economy tougher. All eyes will be on Nene come 24 October… – Stuart Lowman

The rand rebounded 3.9 percent in September after a 9.6 percent slump in August, the worst for that month on record. It could extend gains as the dollar takes a breather, according to Neels Heyneke and Mehul Daya, strategists at Johannesburg-based Nedbank Group Ltd.

Much hinges, however, on Nene, who has to reassure both Moody’s and investors that he has a handle on spending and debt. That won’t be easy, given that the economy is struggling to emerge from a first-half recession. Last year, a widening fiscal deficit and slower economic growth projections led S&P Global Ratings and Fitch Ratings Ltd. to strip the country of its investment rating, sending yields skyrocketing and the rand weaker.

“October is key,” said Christopher Shiells, a London-based emerging-markets analyst at Informa Global Markets Ltd. “We and Moody’s want to see a medium-term budget policy statement that focuses on fiscal consolidation, and stabilising debt levels, given the low growth environment.”

Moody’s rates South Africa’s local-currency debt at Baa3, the lowest investment level. The rating company’s stable outlook on the debt means there is little chance of a change in the assessment soon, though it said last month South Africa has to stabilise its debt to prevent a change to negative.

Emerging markets are rebounding from the second-quarter horror show, but for the rand October still holds risks https://t.co/Ky6ovYAB5d pic.twitter.com/xmmTINiPZM

Disappointing Moody’s would prove costly. Foreign investors own almost 40 percent of South Africa’s R1.97 trillion ($139 billion) of local-currency bonds. Should the country lose its investment rating, it would be excluded from Citigroup Inc.’s World Government Bond Index, sparking outflows of about $5 billion as investors who track the gauge are forced to sell, according to Bank of America Merrill Lynch.

“The bar for Moody’s to act remains high but WGBI exclusion is a long-term risk,” Gabriele Foa, a London-based analyst at BofAML, said in a note dated Sept. 26. “Rough math suggests that while it is not an immediate risk, the long-term risks from potential investment-grade losses remain elevated.”

Moody’s was scheduled to review South Africa’s credit rating on Oct. 12, but said last month it may delay until after the budget statement on Oct. 24. For now, traders aren’t overly concerned, if options pricing is anything to go by. The premium of options to sell the currency over those to buy it in the next month, known as the 25 Delta risk reversal, traded near its the lowest levels in almost two months on Monday at 3.1 percentage points.