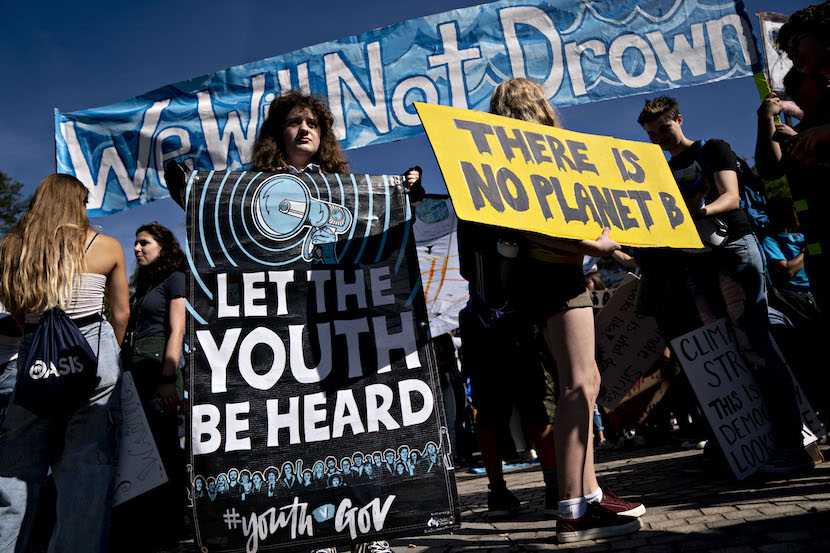 This Friday in South Africa will provide a real-life juxtaposition of what Chuck Stephens, Executive Director of the Desmond Tutu Foundation, is ventilating here around protest and how it’s done world-wide. Not only will this Friday be the culmination of unprecedented global climate change protest with marches in our main cities, but a national bank strike by a local union boasting 50,000 members, is scheduled. We’re not the greatest exponents of civilised versions of this democratic art; top local social scientists have long been calling our widespread, violent protests, many around service delivery, a ‘rebellion’ or ‘revolt’. Let’s hope the Finance Union, formerly known as the South African Society of Bank Officials’ disenchantment with digital technology makes its grievances heard peacefully. Our militant tradition of protest, born of the ANC’s armed struggle and rendering the country ungovernable through mass civic action, continues, costs billions in wrecked infrastructure and production hours, accompanied as it is by vandalism, arson and looting. The now-wholly inappropriate tradition, given our universal suffrage, of using violence to get attention, never ends well. Far removed from the lone voice of a teenage Swedish climate change activist who has ignited a global movement. For whichever cause, how we respond today will determine our children’s futures. – Chris Bateman

I have always been an admirer of marches. Martin Luther King Jr. inspired me as a youth, and his activism involved famous marches – to Selma, to Birmingham, then eventually to Washington. It stirred our souls deeply. The adults marching for civil rights knew the risks, and they were often brutalised by the police. But not children. We were still observers not activists. We were too young.

We watched as the women marched in Pretoria in August 1956. This was a memorable event – to protest the pass-laws for black women under grand apartheid. The cracks in both racial and gender discrimination were just starting to show.

Then it all came apart at Sharpeville in March 1960. Children were massacred. By the time it was over, 500 citizens had perished. It was also about pass-books.

Marching is a form of protest. It is powerful because of its collective force. Not like a hunger strike of one prisoner taking on the system. It is a show of power, of numbers, of mutual disapproval.

But it is getting a bit mad. LA Kaufman has published a book called How to Read a Protest: the Art of Organising and Resistance. Order it at your bookstore. Or you can rather go to Amazon and buy another book by Stephanie Hessel called Time for Outrage! (This is the English translation of the bestselling tract Indignez-vous! by the French diplomat, member of the French Resistance and concentration camp survivor Stéphane Hessel).

The number of people marching seems to be on the up and up. Last week’s environmental activism is a case in point, triggered by 16-year old Greta Thunberg. Millions of people joined this event – variously called a strike, a protest, a march, a demonstration – in dozens of countries simultaneously. And why should Youth not be leading the charge? For they will be affected more than the rest of us by climate change. But so far they are polite and non-violent. They are like a whole new generation of Naider’s Raiders. But so far they don’t have the punch or the cheek of Greenpeace.

God forbid that they ever connect to the methodology of South African citizens in what we euphemistically call “service delivery protests”. These are not civil disobedience in the best sense of the term. They are violent democracy. They are riots.

The memory of Andries Tatane stands out. He was a school teacher and an activist. He tried to calm down the tempers of the protesters. But they got out of hand. The police responded by firing rubber bullets. He went over to ask the police to calm down as well. Blessed are the peacemakers. He took a rubber bullet in the chest, and died twenty minutes later. God rest his soul.

Do you have any idea how much academic research has been done over the past two decades on this phenomenon that we call “service delivery protests”? It is amazing. Try Googling this term some time and you will find pages and pages of articles about them.

I will refer to only one study. It was done by six researchers and is called Frequency and Turmoil. It covers events across the country between 2005 and 2017. Here is a short quote from its Conclusion:

“In considering turmoil associated with community protests, we introduced a distinction between violence and disorder, providing a three-way categorisation of protests as orderly or disruptive or violent. We argue that this way of understanding turmoil is more sympathetic to protesters and to the history of protest, better captures the changing dynamics of protests, and consistently applies a definition of ‘violence’. Further, it is alive to the police’s concern with both preventing disorder and policing violence.”

This forty-page report by the Institute for Security Studies and the University of Cape Town ends on this note:

“Since 2006, there has been considerable growth in the number and turmoil of South Africa’s community protests. In 2010, Alexander described these protests as a ‘rebellion’, a term taken up by other writers. If it was right to draw attention to the scale of the revolt then, it is even more appropriate today.”

Two years ago I joined a march in Pretoria organised by Save South Africa. I am a big boy now and I did a risk assessment. Yes there are worries and inconveniences, but it mattered more to me that the triumphalists be brought to book, than the prospect of getting caught in the crossfire like Andries Tatane.

I am still an admirer of peaceful protests, and of courageous civil disobedience in general – as long as it is non-violent.

I feel outraged when I hear of libraries being burned down, trains being set on fire, and children losing valuable time at school. It makes me wonder why – when the franchise is universal – this kind of lawlessness prevails. Why do people who can vote turn constitutional democracy into violent rebellion? The study quoted above is right – that is revolting (pun intended).

God bless Greta Thunberg for keeping it non-violent and for her persistence. Oliver Tambo once said that a nation that does not take care of its Youth has no future… and doesn’t deserve one.