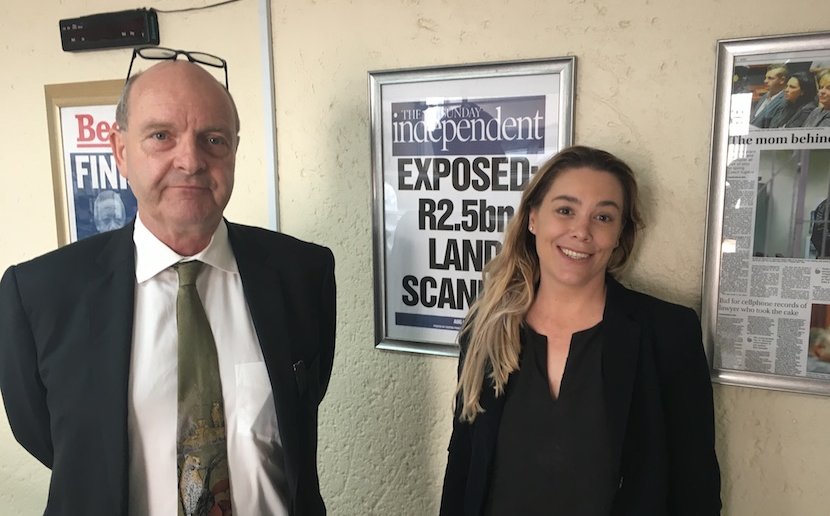 Alec Hogg hosts a spirited and highly informative webinar, during which Biznews’ own Linda van Tilburg interviews Rachel Kolisi about the Kolisi Foundation and the exceptional work that she and her husband, Springbok captain Siya Kolisi have been doing to alleviate the hunger of many South Africans who have fallen victim to the manifestations of the spread of Covid-19 and the lockdown regulations. The webinar also hosts Forensics for Justice duo Paul O’Sullivan and Sarah-Jane Trent, who discuss their fierce determination in the fight against corruption and state capture, which has plagued South Africa for well over a decade now. – Nadya Swart

O’Sullivan, together with his long-time second in command, Sarah-Jane Trent, has been fighting the good fight against corruption in South Africa for many years. Citing one example of their work, O’Sullivan referred to a docket (drafted by Trent) opened in 2018 relating to the corruption of former president Jacob Zuma, former SAA chair Dudu Myeni, her son Thalente and their advisor, “who saw fit to assist Jacob Zuma in hijacking Eskom”.

O’Sullivan and Trent targeted various other characters who have added to state capture and the cases they’ve worked on can be seen on the Forensics for Justice website. Donations can be made towards and anonymous posted on the website.

The mention of Edward Zuma, the first of the documented Zuma children, and his illicit tobacco trade led to a discussion on the extent of the depth to which corruption runs within the Zuma family. O’Sullivan estimates that around R500bn had been ‘swiped and purloined’ from the various state-owned companies and essentially stolen from the fiscus in South Africa – money that could now have been used to uplift the poor in our country. O’Sullivan and Trent  say they have been doing the work, building and presenting prosecutable cases, yet “dockets gather dust” due to the state’s failure to “get off their butts”.

The irrationality behind the cigarette sales ban was highlighted in the conversation as the beneficiaries of the decisions not to allow tobacco sales – notably, Edward Zuma’s company, the Amalgamated Tobacco Manufacturers (ATM) – are “laughing all the way to the bank”.

On Covid-19, O’Sullivan says the coronavirus will be around for years and people will have to learn to live with it responsibly. On the irrationality behind some government lockdown regulations, he says it is no good saving 3,000 lives if it means that millions will ultimately suffer from starvation and even suicide, as a “massive social fallout awaits us”.

“We need short, sharp shocks to the system,” O’Sullivan says, referring to the incompetence of the government to prosecute criminals involved in corruption. “Instead of the NPA’s shotgun approach, we need a sniper approach” to prosecute, he says.

While O’Sullivan believes that the criminal justice system in South Africa is captured, he urges the pursuit of low hanging fruit – prosecuting individuals by charging them simply with two or three crisp, clean offences that he and Trent have laid the groundwork for, he says.

O’Sullivan’s passion for justice runs deep. Over the last five years, he has put over R10m of his own money towards the financing of Forensics for Justice. What he believes is ultimately required is a clear signal that “if you commit corruption, you are stealing the future of the country, and you will spend your future in prison.”

Despite his immersion in the fight against corruption, O’Sullivan believes that with a change in the mentality of the NPA and the systems in South Africa, “South Africa will be where it should be – one of the best countries in the world.”