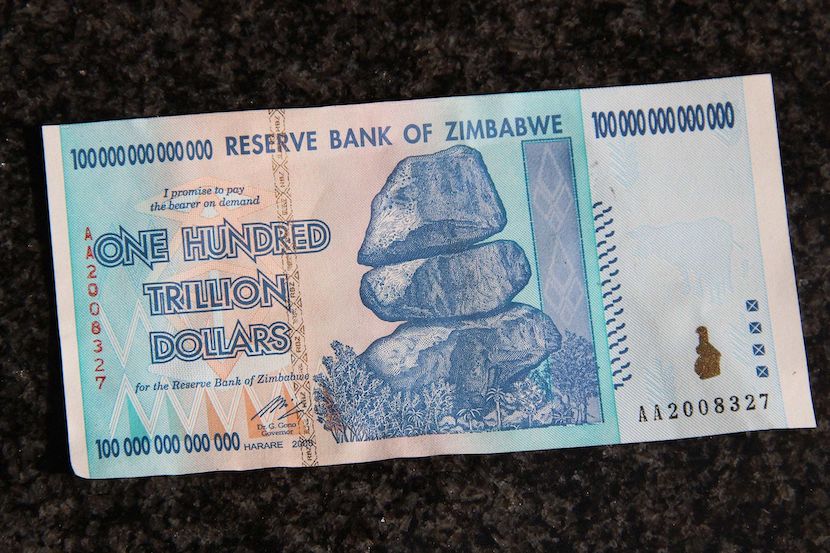 Our neighbouring country, Zimbabwe, yet again finds itself at the cusp of an economic crisis. Zimbabwean author Cathy Buckle compares its current state to that of being dragged up a steep, slippery slope, going nowhere without help. She notes that even while the Zimbabwean dollar is in trouble and losing confidence as a currency, its leaders carry on with old habits: “shouting, blaming, arresting, accusing, and threatening”. The value of the Zimbabwean dollar against the US dollar has greatly depreciated as a result of short supply on the foreign currency auction system. The system would resolve its year-old foreign currency crises, but it now poses a significant threat on importers and retailers to keep business afloat. Officials have arrested plenty foreign currency traders for being “saboteurs” and “fraudsters”. Meantime, life for the ordinary Zimbabwean is becoming increasingly worse. Buckle notes that perhaps the slippery slope needs a different approach. – Sharidyn Rogers

When it started raining at dusk and went on all night I knew I had a problem. With a friend on the banks of a river in a mountainous area where the roads are all steep hills, sharp corners and red soil I knew it was going to be a treacherous 17km journey the following morning. Still raining at 7.30am we had to abandon one last walk along the banks of the beautiful crystal clear river and leave it rushing along the pebbles and gushing over the rocks. The first 15 km were bad: heart pounding, hands gripping the wheel and sideways driving we crept along, the red roads sticky, clingy and slick. Three or four bends from the end the wheels gave up, thick red mud in the tread and then another inch on top of that and a steep slippery slope ahead. We were going nowhere without help, a tow rope and a powerful pull.

Being dragged up the hill was very appropriate for the state of Zimbabwe which again finds itself driving sideways and backwards and on a slippery slope to nowhere. Zimbabwe is on the cusp of another economic crisis. The last one was between 2005 and 2008 and in just thirteen years our leaders are doing the same things all over again: shouting, blaming, arresting, accusing, threatening. (See my book “Millions, Billions, Trillions” for that slice of our history)

Foreign currency is in such short supply that the value of US dollars against the Zimbabwe Bond dollar is soaring. The government’s auction system where companies and businesses have to bid for US dollars to meet their costs and imports is a joke. Successful bids for US dollars which are supposed to result in currency arriving in two days are now taking 15 weeks before funds are allocated by the Reserve Bank. It’s all but impossible for importers and retailers to do business when they have to wait almost four months for the currency they need to keep operating.

Over the past few weeks scores of foreign currency traders have been arrested. Government says they are weeding out ‘saboteurs’ and ‘fraudsters.’ Government is threatening to suspend operating licences of businesses they accuse of using black market rates to price their goods and services. Vice President Chiwenga said the Zimbabwe dollar was being deliberately sabotaged and said “I wish to warn perpetrators of this heinous crime that the long arm of the law will soon catch up with them.” Chiwenga said people being arrested on “currency manipulation” charges will spend Christmas in prison. The CZI (Confederation of Zimbabwe Industries) said: “The Zimbabwe dollar is now in real peril” and“ clamping down on informal foreign exchange trading in the absence of a viable formal market will have catastrophic consequences for the economy.”

Meanwhile for ordinary Zimbabweans the nightmare is getting worse. Food prices are increasing because retailers are charging more in order to keep up with the cost of buying US dollars to import goods to restock their shelves. Tel One, the country’s telecommunications provider which is owned by the government, just increased their prices by 30%. Fuel prices increased from $1.25 a litre to $1.35 this week. And then, to make life harder my home town is crippled by electricity power cuts which are lasting up to 14 hours at a time, three or four or five times a week. An enquiry to the local electricity supplier (ZESA) requesting the schedule of power cuts they said they aren’t following their own recently published Load Shedding Schedule anymore saying they just get instructions from HQ to load shed which they do. Oh Zimbabwe, the slippery slope needs a different approach this time surely?