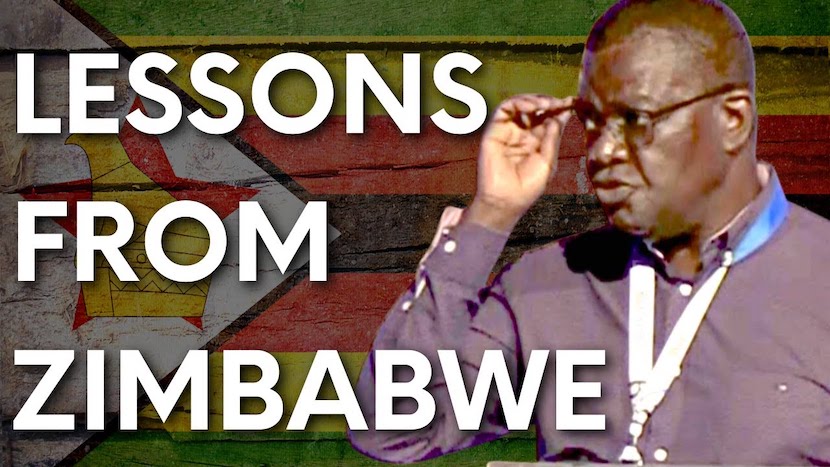 Our neighbour to the north, Zimbabwe, is in a torrid state. It has been for some time but it seems the status quo – despite having a new coup-imposed leader since late 2017 – is not budging. The outlook in the short term remains bleak. Although, recovery in the long term remains a possibility according to Zimbabwean entrepreneur and media mogul Trevor Ncube. He shared his views on the final day of the BizNews Conference in the Drakensberg about whether Zim presents opportunity for investors or is a basket case. It is the latter that shone through in his comments.

Trevor Ncube on the opportunities that Zimbabwe presents

I’m going to share what I see as opportunities in Zimbabwe and what I know to be the problems that the country currently faces. Then, you make up your mind whether Zimbabwe offers an opportunity or is a basket case. In doing so, I must remind you of the story of the two salesmen who went into a continent and one of them sent a message back saying: “These people have no shoes. We can’t sell them shoes because they don’t know anything about it,” while the other salesman said: “These people have no shoes, please ship as many shoes as possible.” That’s what my country is right now. You decide whether we don’t have shoes and we’ll never wear them; or if you ship them, whether we might put them on. Let me start with an interesting opportunity that exists; the cannabis industry has become huge in Zimbabwe. Laws are being fine-tuned to allow people to invest in medicinal cannabis and industrial hemp. The two have been divided and we’re seeing a lot of foreign investors coming in. A licence will cost you US$57. Another interesting thing – which you will not read about in books or in magazines – is the amazing building boom in a country with no mortgage finance, where banks cannot afford to lend people money to build houses. To a large extent, this building boom is being financed by diaspora remittances, which in 2020 were US$1bn. In 2021, those remittances stood at $1.4bn. So, there is a building boom and everything that goes with it. To a large extent, we are an agricultural country, with agriculture supplying about 60% of raw materials. The second biggest crop is cotton. If only we could have GMOs or the political willingness to have GMOs… That would increase production. At the moment, we are producing only 30% of our national requirements of soybeans and the return on investment on soybeans in Zimbabwe is 200%. Then there is tobacco, the largest export crop, contributing 11%.

We are also a mining country with over 40 minerals, including diamonds, platinum, gold, lithium. We have got the largest lithium deposits on the African continent. Oil and gas exploration has become huge. One thing that got me excited in 2017 when I could see the possibility of a new Zimbabwe – believing that since Robert Mugabe was gone, we could rebuild – is the opportunity that lies in mining exploration. We don’t know exactly how much there is underground and the investment required to do that. Unfortunately, that has not happened.

Tourism is also a big thing in Zimbabwe, but road infrastructure, rail, airports and policy issues are still a huge impediment to tourism being able to contribute full force. Sadly, our roads, our railways, sewage and water reticulation have not been attended to and are in total disrepair. It’s a crisis but also presents an opportunity for investors. The road network in Zimbabwe has been declared a national disaster. This is a good and a bad thing. National funds are being deployed to build roads, but that brings in an element of corruption.

On the failing state of Zimbabwe

The new dispensation arrived in 2017. I was excited and went home. There was an amazing buzz in Zimbabwe that things were going to be better. I was among the first people who stood up and said we should give Emmerson Mnangagwa a chance, and how wrong I was. I believed it because he sat in the same room as Robert Mugabe and saw what he did to the country. Secondly, Mnangagwa played a role as far as Gukurahundi is concerned; the massacre of over 20,000 people in Matabeleland. I thought it was time for him to make amends. I was generous in my spirit as a God-fearing man that he was about to do a turnaround. I was approached and agreed to serve in the Presidential Advisory Council. I have sat at close range to the president and advised him on a number of issues but have since stepped down. I could see it was not going to end well. We thought Robert Mugabe was bad. Sadly, President Mnangagwa has shown an amazing [aptitude] to do things much worse than Robert Mugabe ever did. The most frightening [is that he has mutilated] our Constitution and captured our judiciary. When they took away my passport, I went to court and fought, in the confidence there would be a judiciary to argue my case and, indeed, that happened. When they took away my citizenship, I involved my lawyers and got my citizenship back because the judiciary was professional. That is no longer the case and it scares me. The government is unable to provide public services or protect its citizens. It only protects its interests. Sadly, in this regard, Zimbabwe is teetering on the edge of becoming a failed state. It breaks my heart when you see what the police force has become. Parliament is a place where mediocrity is displayed in full force. There is a danger of hunger in Zimbabwe because our currency is losing value. It is as if somebody has opened a tap and water is gushing out. Currencies have become a big issue in Zimbabwe. It has caused instability across the economy. When you get up in the morning, you have no idea at what rate you will be charged for products and services as the currency fluctuates a lot.