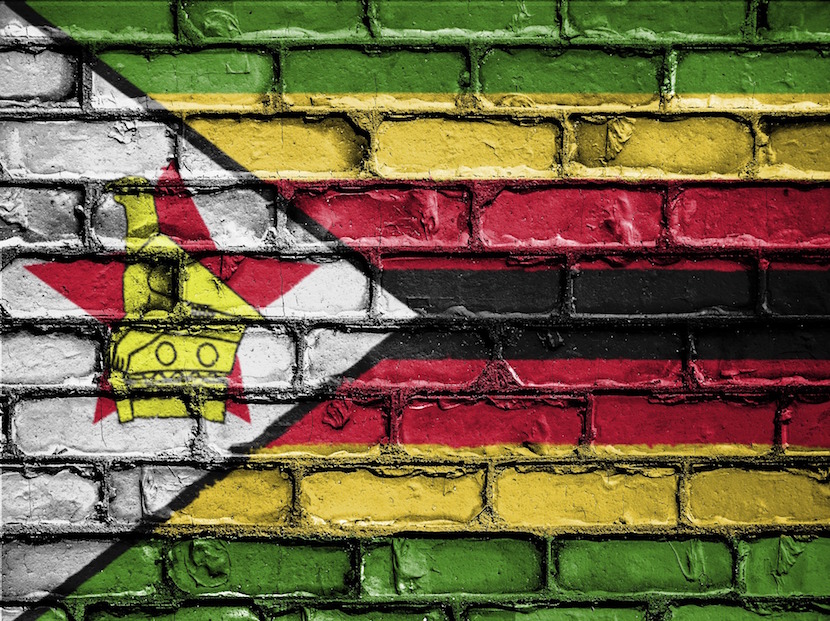 Zimbabwe is a failed state, helped into a shallow grave by its current Zanu-PF leadership. But, President Emmerson Mnangagwa and his predecessor Robert Mugabe were handicapped by the colonialists who helped themselves to its riches and ensured they maintained their positions as the elites. That’s the message from journalist Barry Wood, who revisited Zimbabwe in 2017 after Zimbabwe’s Second Republic, as some of the locals called it, was born. While many blame four decades of corruption, inefficiency and misrule for the collapse of the economy and the concomitant daily misery for most of its people, Wood’s message is that colonial ghosts still haunt the country and its current rulers are unable to exorcise them. – Jackie Cameron

It is January 2019. I’m the sole guest in an elegant dining room where a dozen tables are set with starched napkins and crystal water goblets awaiting patrons who will never arrive. Floor length drapes are pulled back and neatly tied on windows that look out over a manicured garden. A portrait of young Queen Elizabeth in a white gown is displayed above mahogany wainscoting.

This is the Bulawayo Club, for decades the social hub for Rhodesia’s white business elite. Somehow this remarkable 1935 structure has survived Zimbabwe’s catastrophic decline but new life as a hotel is failing. Ghosts of past glory, portraits of hundreds of stern former club presidents and illustrious members adorn the walls. Billiard queues are untouched in their racks. A cavernous men’s room boasts a dozen urinals but not a single footfall on the patterned floor tiles. 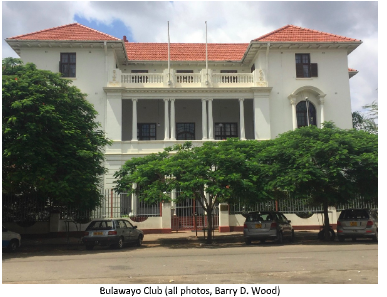 On my second night I’m no longer alone as three additional guests have arrived. A French television crew from Johannesburg is here to record expected protests against the equally despotic rulers who replaced Robert Mugabe in November 2017.

At 8 a.m. Saturday I’m met by Kurt Schmidt, a 46-year-old South African born game guide, whom a friend has hired to show me the Matopo Game Park and the resting place of empire builder Cecil John Rhodes. During our 30-minute drive south, Kurt stops to remove from the roadway a small genet, a spotted cat-like creature unique to Africa, that has been run over.

Entering the game park, we are greeted by two AK-47 carrying anti-poaching guards whose job is protecting a growing herd of endangered rhinos. “We now have 41, 11 of them under two years of age,” says Schmidt with some pride. This success, he continues, is in contrast to the shrinking rhino population at Hwange National Park five hours north where there is minimal protection. Victoria Falls on the Zambezi River not far from Hwange is Zimbabwe’s main tourist attraction and hard currency earner.

Driving on a rutted trail we reach a clearing where Kurt parks the bakkie (pickup) and we begin walking. The terrain is sun baked and hard. We plod on through the bush past occasional thorn trees and dung heaps. We pause to observe a swarm of dung beetles. Bigger than crickets, they push balls of dung several times their height. 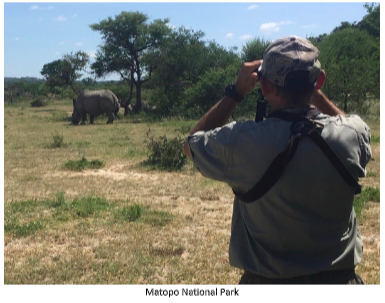 Eventually, Kurt spots three rhinos in the distance upwind from us. They are resting in a clump of trees. The guards advance silently on our right, relaxed. One of the giant creatures gets up and appears to be staring in our direction. My companions are unconcerned. Kurt whispers that rhinos have poor vision but can easily outrun humans. Slowly we walk on towards the majestic beasts. We pause some 50 yards from them and after some minutes turn and walk away to the left. After another quarter mile or so we see five rhinos in a low spot shaded by trees. Through field glasses, the guides recognise the animals. Smiling and speaking in English, one whispers, “21-151.” Kurt agrees. Again, we advance with caution, stopping at about the same distance as before.

Returning to the pickup but still in Matopos, we drive to the trail that winds upwards to the grave of Cecil John Rhodes. Having controversially obtained for Britain dominion over a territory as large as the eastern United States, Rhodes came here frequently and enjoyed morning rides through the hills. He was one of the world’s richest men, a financier and politician whose fortune came from diamonds and gold.

Rhodes’ grave is situated at the highest point on a plateau flanked by boulders with magnificent views in all directions. Standing on a slab of smooth rock, Rhodes called the summit “World’s View” and designated this as his final resting place. The Matopos Hills are revered by the local Ndebele tribe and their 19th century king Mzilikazi is buried not far away. 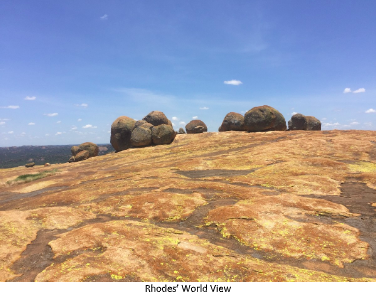 In his time Rhodes was both venerated and vilified. He is still loathed by Afrikaners for instigating the three-year-long Anglo-Boer war in 1898 in which 30,000 people died. More recently black students at the University of Cape Town forced the removal of a prominent Rhodes statue from property he bequeathed to the university. They label Rhodes racist and rapacious.

Afflicted with a congenital heart condition, in 1902 at age 48 Rhodes died at his seaside cottage near Cape Town. His death prompted a huge outpouring of grief not just from English speaking whites. A special train bore his body to Bulawayo, the 1,100-mile journey requiring four days as the train stopped often to allow mourners to pay their respects.

It was Rhodes’ dream that the railway over which he made this final journey would one day proceed all the way to Cairo. It didn’t happen.

Later in the stillness of the Bulawayo Club I stroll through empty meeting rooms and come upon a framed photograph of the first train reaching Bulawayo in 1897 five years before Rhodes’ death. This depiction of confident pioneers – all white – under the “Advance Rhodesia” banner is strikingly similar to the golden spike ceremony in Utah upon completion of America’s transcontinental railroad.

The photograph is a reminder that colonisation in Rhodesia was for the benefit of British settlers. Bulawayo in southern Rhodesia was as segregated as the American south. As late as two decades into the 20th century blacks were restricted from shopping downtown. Africans were referred to as natives (or worse). The Bulawayo Club was off limits to blacks for decades and even now few Africans are among the portraits on its walls.

Zimbabwe since 2000 has been a case study in failure. Ethnic divisions were exacerbated during Robert Mugabe’s murderous 37-year reign. Ndebele populated Bulawayo was ignored while political favours went to the Shona speaking rest of the country. Mugabe’s fury unleashed the North Korean trained fifth brigade on Matabeleland where soldiers rampaged through the countryside slaughtering 20,000 people, as many as perished in the liberation war. The irony that the bulky Nkomo statue was cast in North Korea is not lost on Bulawayo residents.

Accepting the hospitality of friends, I’m driven to Bulawayo’s airport for the evening flight to the capital, Harare. The magnitude of Zimbabwe’s economic collapse is on display as we move through a dilapidated city. At a rare service station that is open the queue of cars waiting for gasoline stretches for a quarter mile. Destitute people stand in lines outside food shops. Half of Zimbabwe’s population is malnourished. There is no credible money. Water supplies and electricity are sporadic. There are no jobs.

In darkness we approach the airport but there are no signs of life. The runway is unlit. I’m convinced the airport is closed but my host suspects otherwise. A front door is open and in the corridor’s dim light there are prospective travellers. Amazingly, the Brazilian-made Fastjet aircraft lands on the darkened runway and comes to the gate. My time in Bulawayo comes to an end.