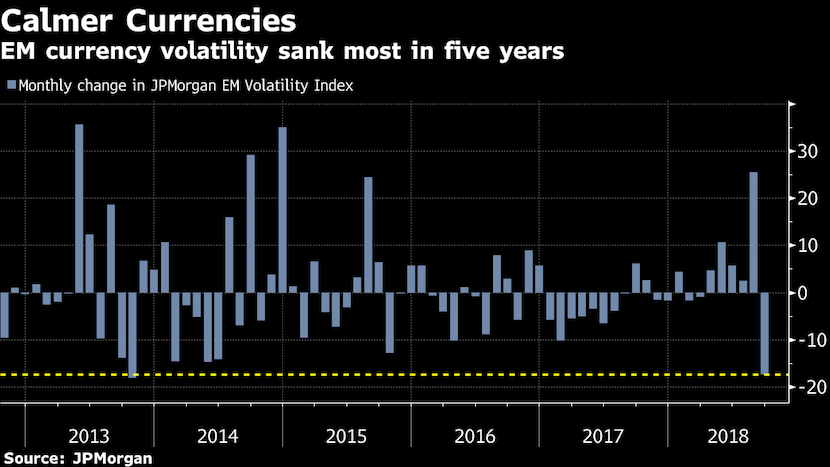 JOHANNESBURG — It’s been a terrible year for emerging markets as the likes of Turkey and South Africa have come under tremendous economic pressures. Unfortunately, politics is part and parcel of these economies and there’s no getting away from this. But some analysts say that there are signs of an EM revival on the horizon. Interestingly, it’s driven by an uptick in commodities. Hopefully, South Africa will start to place itself firmly on the tracks of the commodity cycle again and not miss out like it has previously… – Gareth van Zyl

By Srinivasan Sivabalan and Selcuk Gokoluk

(Bloomberg) – After a rally from mid-August gave way to another sell-off through early September, emerging-market investors would be forgiven for being wary of new signs that calm is returning.

But with the dollar struggling to make headway and equity valuations in the developing economies near the lowest this year, the scene may be set for more gains. So say commentators from JPMorgan Asset Management to Wells Fargo Asset Management. There’s even optimism that the world’s biggest economies will reach a truce on trade tariffs after the breakthrough reached between the US, Canada and Mexico on Sunday, potentially removing one of the biggest risks to the sector.

“It does look a lot more attractive at the moment to be buying the dip we have seen in emerging-market assets because they’re much better priced than they were in the heat of the moment at the beginning of the year,” said Marc Ostwald, the London-based global strategist at ADM Investor Services.

For sure, there are headwinds, including rising US rates and political troubles in countries from Brazil to Turkey and South Africa. Not to mention the Italian fiscal turmoil that’s currently sapping risk appetite, sending a gauge of emerging-market currencies lower on Tuesday.

But here are three charts suggesting some comforting trends taking hold as the third quarter drew to a close: 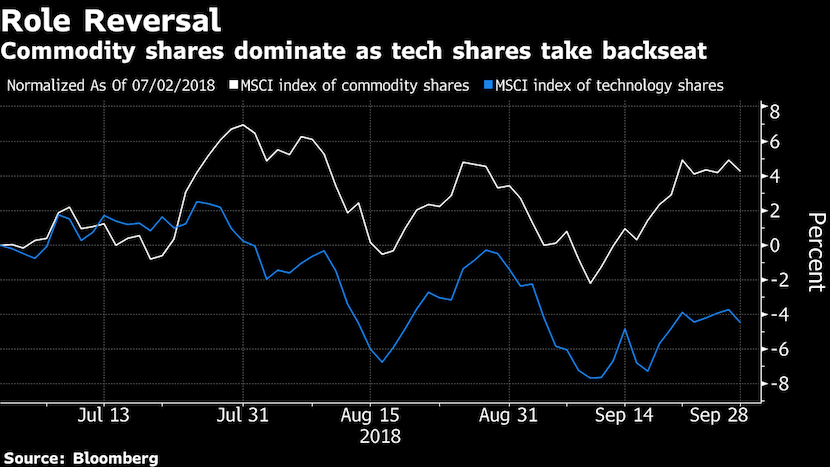 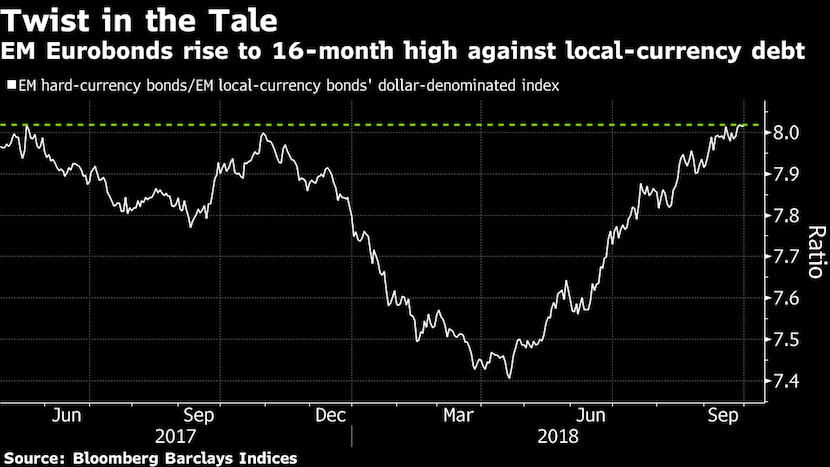 At the start of the year, most investors had bet on a weakening dollar. As an extension, they expected local-currency bonds of emerging markets to outperform foreign-currency bonds. As the dollar’s strength since April surprised them, their call on the bonds fell flat and dollar bonds held up better in the rout.

In September, investors were in for a second surprise. While the dollar showed signs of weakness, and local currencies rebounded, the relative performance in the bond market didn’t change, and foreign-currency debt rose to a 16-month high against local counterparts.

“The underperformance in local government bonds this year is down to the strong dollar backdrop markets faced over the last few quarters,” said Diana Amoa, a London-based money manager at JPMorgan Asset Management. “We see a peak in dollar strength materialising in the coming months as other central banks start to normalise rates and this should be supportive for local bonds.”

The emerging-market equity rally in 2017 was driven by information-technology shares, breaking from the past when stocks of commodity producers had been the main driver. But the third quarter reinforced the importance of commodities to emerging-market outlook.

Now there’s a more nuanced understanding of the dynamics of equity returns: it’s only China and India that have made rapid strides in technology. For most non-Asian markets, commodity exports remain key to equity performance.

Commodity stocks outperformed technology stocks by 7.5 percent in the three months to September.

“Higher oil prices and the general strength in the commodity sector will continue to be the focus for the quarter,” said Naeem Aslam, the London-based chief market analyst at TF Global Markets UK Ltd. “We also think that emerging markets do not have any immediate threat as long as the Fed doesn’t show their overly hawkish hand and the trade war remains in check.”

Derivative traders are cutting their bets on emerging-market currency volatility. A JPMorgan Chase & Co. index on expected currency swings fell more than 17 percent last month, the most since the Taper Tantrum in 2013. Given that the sell-off this year originated in currencies, this turnaround signals a brighter outlook for riskier assets as a whole.

“Many central banks responded to currency weakness by fighting against the weakness with rate hikes rather than leaning into the weakness with rate cuts,” said Brian Jacobsen, chief portfolio strategist at Wells Fargo. “That should help investors get comfortable with the idea that emerging market countries aren’t going to try to competitively devalue their currencies.”