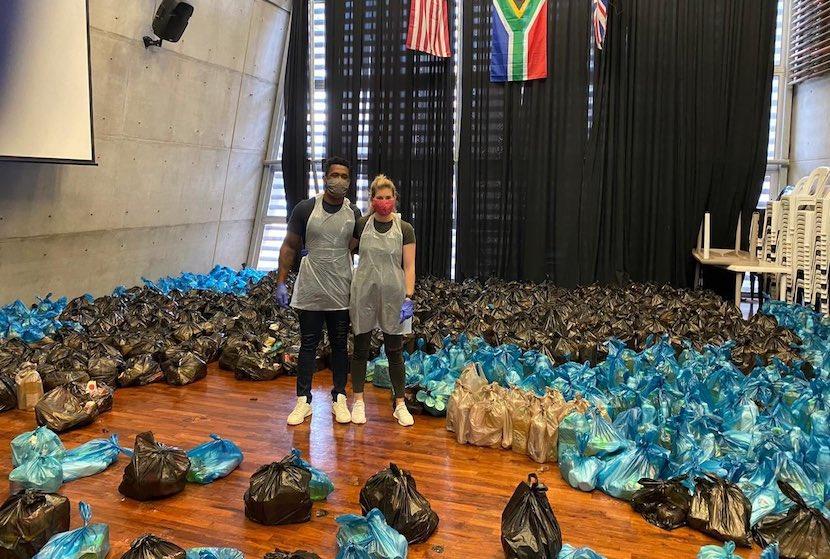 The captain of the Springboks Siya Kolisi is a man known for humility and he knows just what to say in the big moments. With food and hunger, and the needs of so many poor communities increasing due to the lockdown in South Africa; he is again in tune with what the nation needs. He and his wife Rachel have decided to switch the focus of the foundation that they were setting up from rugby to help those in need during the pandemic. As Rachel told Biznews, Siya experienced hunger first hand when he grew up. – Linda van Tilburg

Actually the foundation was not due to launch for another few more months but with the Covid-19 situation; we really wanted to help and assist wherever we could. So, we have been doing projects previously and Siya has been working on a collaboration to build a rugby field in one of the townships in Cape Town. We had dreams of tournaments and to make an impact on children at youth level and wanted to make sure that there’s an equal playing field all through South Africa.

I have been doing a number of community projects in and around Cape Town and Port Elizabeth as well but we weren’t officially ready to launch the foundation. We’re still working on a website and have a landing page up and running, but we wanted to help where we could with the Covid-19 situation.

So we were able to assist three different hospitals with PPE, protective gear for the frontline workers and then we were advised by the private sector to move away from PPE and focus more on feeding. One of the biggest issues in South Africa is trying to keep people at home. And obviously people can’t do that if they’re unemployed and not able to get food or make sure that people are fed at home.

And I’ve seen you’ve been to some townships. Can you give us a feeling of what is happening on the ground. Is there a real hunger out there?

It’s absolutely extreme. We did our first job in Port Elizabeth in Zwide, the township where Siya grew up and then we went over to Limpopo where we did a drop-off. The water situation in Limpopo is horrendous so we also dropped a bore hole in Limpopo. We have also done a second food drop-off in Port Elizabeth and numerous amounts of drops in Cape Town as well.

The ones I think that have been heaviest hit were in the Mitchells Plain, Mannenberg and Tafelsig areas of Cape Town. There were a lot of kids that are running around without any form of protection at all. A lot of people don’t seem to be really understanding the severity of the situation. So it’s just been really great that we’ve been able to go out and of course, Siya is one of the most influential people in South Africa at the moment and I think for people in those communities to hear it come from his mouth that it’s super important that they stay at home, that they wear a mask and that they keep on sanitising and washing their hands.

On our second drop in Port Elizabeth, when we went back; we could see that they were now taking it seriously and it was extraordinary to see how many of them were actually wearing the masks. With the food drops that we are doing; we’ve committed to three months; none of the drops that we do are one-offs. So it’s for three months to hopefully get these people through the Covid-19 situation.

One by One we are reaching vulnerable families through the work of the Kolisi Foundation, partnering with Imbumba Foundation, Anglo Gold, Old Mutual and @NelsonMandela Foundation. This past weekend we were able to distribute 500 essential food parcels to families in Zwide… (1) pic.twitter.com/j88P6X9omu

You mentioned that Siya said he’s been there, did he experience hunger as a kid?

When we went on the second run to Port Elizabeth; one of the first houses that we came was very close to where he lived and some of the ladies actually burst into tears and said; when you were a child you used to come with a little plastic cup to our home asking for samp or beans, or whatever he could get to fill his family’s tummies, basically, for the night. So, he used to run around with his empty cup in Zwedi and it was just extraordinary to hear those women saying; it’s amazing that now you returned to us with food for a month. We are working on about a R100 per person per month. So for a family of six, it’s R600 a month. That’s kind of the budget that we are working on at the moment.

Has Siya been roping in other sportsmen to help him?

Yes. There has been so many of his teammates that have been asking about it and seeing how they can get involved and wanting to start foundations as well, which is super amazing. There are a number of them; I know that Eben Etzebeth did a drop; Wade van Niekerk joined this past weekend and Siya is out today with Cheslin Kolbe to drop food off in the Cape Town area. So there’s a lot of other sportsmen that are getting involved. I know that Jesse Kriel is doing a lot in Durban as well. A lot of Siya’s teammates want to get involved as much as possible. We just try to support them if there is a problem. We also did a drop with (cricketer) Faf du Plessis in Cape Town but a lot of the players just have their own vision. They have their own project and we don’t want it to be a Kolisi show. We just want to assist if we can to make their project happen but by no means are we looking for any credits from the projects that they are pushing.

What would you like to ask the business community – do you want people to go to your site and donate; I see you are partnering with Old Mutual?

We’re not officially partnered with Old Mutual; so one of the campaigns that we are working on is the #Each1Feed1 campaign with the Imbumba Foundation who are partnered with Old Mutual and the Nelson Mandela Foundation. But I think at this point finances are the biggest thing. There is a big project we’re going to be rolling out next week. We’ll be traveling back to Port Elizabeth to roll out a model for schools, which we will give more information on later on. But basically, one school is going to adopt another school; a model-c school is going to adopt a disadvantaged school. But the shortfall (in money) that comes from this model-c school; we are going to have to, as a foundation, pick up and that’s going to be a massive project and obviously the finances are going to be extreme. So that would be hugely helpful. There is more information at www.kolisifoundation.org. We are also very active on social media as well and there’s so much more that we are stepping into as a foundation and so much more that we want to do. But obviously top priority at the moment is making sure that people are fed during this time.