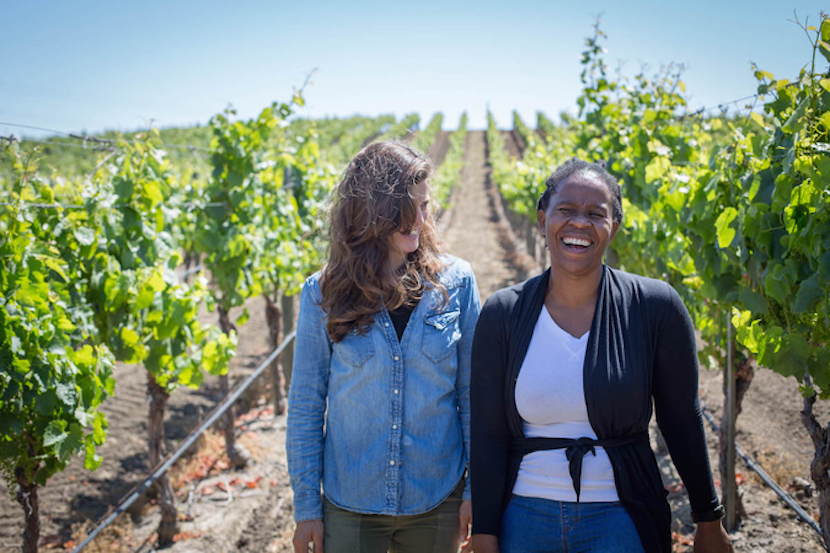 Wine sector body Vinpro has estimated that the first ban on alcohol sales and the ban on the export of wine for more than a month led to the demise of 350 wine grape producers and 80 wineries in the country. It also estimates that job losses in the wine-related industry from that period could be 21,000. One of the smaller wineries that managed to weather this storm is Aslina Wines, owned by Ntsiki Biyela – who did not know what wine was when she secured a bursary from South African Airways for her studies in 1999. She told BizNews how exports kept her afloat in the Covid-19 storm – Linda van Tilburg.

When did you start the company?

I started the company in 2006, I launched it then. When I was working as a winemaker, I knew that at some point, I was going to start my own company. So, I tried to make sure that I learnt as much as I could. In 2011, I met Mika Bulmash from a company called Wines of the World. She told me about her interest in trying to get winemakers from different countries to collaborate and she introduced me to Helen Kiplinger, a winemaker from the Napa Valley.

We did our first collaboration and then we did a second collaboration in 2013, which was released in 2015. From the money, the funds that we made; I started Aslina wines. The company is named after my late grandmother. I grew up with my grandmother, she was the one taking care of all of us at home. I then decided to honour her, to pay tribute to her life and I named the company after her.

Tell me about your background. What did you do before you started growing wine?

One thing I can say, I’m glad that at least the export market has not been closed

So, I started winemaking and then basically ended up in the industry. At that moment, when I came to study, I had no idea about wine. I didn’t even know that it existed. So, it is one of those things where you get an opportunity. They told me, you are going to study winemaking and I said, ‘oh ja sure’ and I actually had no idea what it was. For me, it was just an opportunity to study, that’s how I ended up in the industry.

Wow! You didn’t drive through the wine lands and think I want to own one of these one day or this is the industry that I want to work in?

I grew up in KZN, it’s not a wine region. We’ve got sugar cane, we’ve got other stuff, but there has not been any wine until recently, but it wasn’t something that was, ‘oh yes, I want to do this’. It was just, there was something to study, there were finances because I didn’t have finances, anything that I could afford. It was just an opportunity that had come, and I grabbed it.

Read also: Lockdown: How SA flattened its economy instead of the curve – Johannes Wessels

And now you taste wine for breakfast? I always wonder how you guys do it. Do you brush your teeth and then you start tasting wine or what happens?

Well, you brush your teeth and for the first 20 minutes, the first tasting you have to do in the morning, you slightly go uhmmm and then you taste again and from then on, you are fine.

Now there’s the lockdown. How have you experienced what has happened to the wine industry?

The lockdown happened and it inhibited a lot of stuff because the wine industry, we’re not just an isolated industry. Basically, it’s a value chain of everything that is linked to the wine industry. Every chain that is linked to liquor has been affected badly. So, I think for us, as a small producer, we were anticipating growth of about 30 to 40% and we managed to get at least 10 % growth. It has been a mess. I can put it that way, it has been a mess.

Every chain that is linked to liquor has been affected badly

Do you actually find bottles standing there waiting to be exported? Or is that not an issue?

I thought the support of the international world of the wine industry had been good and people understood that actually South Africa needed some rescue because locally there was no movement, like none. Whatever was allocated for local distribution, was just standing still. We could not export all of our wine because every wine farm had an allocation for the international market. So, whatever was supposed to be for local distribution, we were hoping to get new clients and export to them.

So how many bottles do you produce a year?

Currently, we are on 36 000 bottles. For us, it was difficult to reduce production as it was a small volume. With Covid-19, nobody really knows what is going to happen. So, we could not reduce our production, we had to keep it the same, instead of growing. We were hoping to grow but decided, ‘let’s keep the same volume’.

What are your growth plans?

How has it affected your workers?

We don’t have a lot of employees and we were going to be hiring people to join the team but had to keep that plan on hold because we just didn’t know. We’ll see as time goes on if there’s a possibility of hiring new people. We know that we will need somebody when things open up.

You are saying, you are keeping positive and you are going to hang in there and have not been as badly affected as some of the other winemakers?

Well, 80% of our sales are exported. We only started focusing on the local market last year.

Well, at least the export market has not been closed.

But there was a stage when it was difficult to get wine exports to the ports. Yes, it was, even now, sometimes things get delayed at the port.

Have you found that your neighbours or the people who have been in the wine industry for a long time provided help?

However, whenever I needed help…when I look back on when I started as a winemaker, I could call a winemaker I’ve never met before and introduce myself and ask for help. And I did get help. Even now, I’m working in collaboration and have been assisted in terms of space at Delheim wines. So, yes.

You are well-known overseas for your wine?

Yes, even locally now. We have only started marketing locally now but overseas we are known, our brand is well-known overseas. We’ve won lots of medals, including the Japanese Sakura Award in consecutive years for our wine.

Was it difficult for you to enter that clique of wine farms and would you encourage somebody else with your background to do it?

I think it is human nature. It is one of those complicated things to understand. I remember even when I was about to start my company, I went to Anthony Hamilton Russell and I said to him, I wanted to start my own company. He asked me one question, he said, ‘do you like travelling?’ and I said, it was not about liking travelling.

I would do what needs to be done. He said, ‘then you’re going to be fine’. So, he made me understand that Hamilton Russell had a brand and I was going to have to start from scratch, I needed to understand that and not to gauge myself against others. He advised me to ensure that I focus. I also spoke to Ken Forrester and he said there was one rule that he was going to tell me. “Never allow anybody to tell you what you’re worth”. Those people I used. It was hard. It was difficult.

I think in every place, there are people who are pro and there are people who are anti in everything that is happening. It is just a matter of where do you want to focus as a person. I’ve met people in the industry when I was still a winemaker who were looking at me like I wasn’t a winemaker. They always thought there was a winemaker behind me. I have made a choice that I was not going to focus on those people because I’m going to waste my energy. I’ll focus on those who have been assisting me to grow.

When you look at the restaurant and the tourism industry, people are losing jobs. It’s heartbreaking. It’s painful. As the wine industry we are so linked to all these people and most of them, especially in Cape Town, we know them, some of them in Joburg, we know them, and then you hear, this hotel is closing and you think, ‘oh dear Lord’.

We are hoping that the industry will open. I was saying to someone, as long as we are still breathing, we need to put one foot in front of the other and keep on walking. Somebody asked me the question, when will it be time to throw in the towel? I said, ‘that’s not an option when you’re breathing, throwing in the towel is not an option.’ You try to figure out means and ways of how to make it work and that’s basically what we need to do.