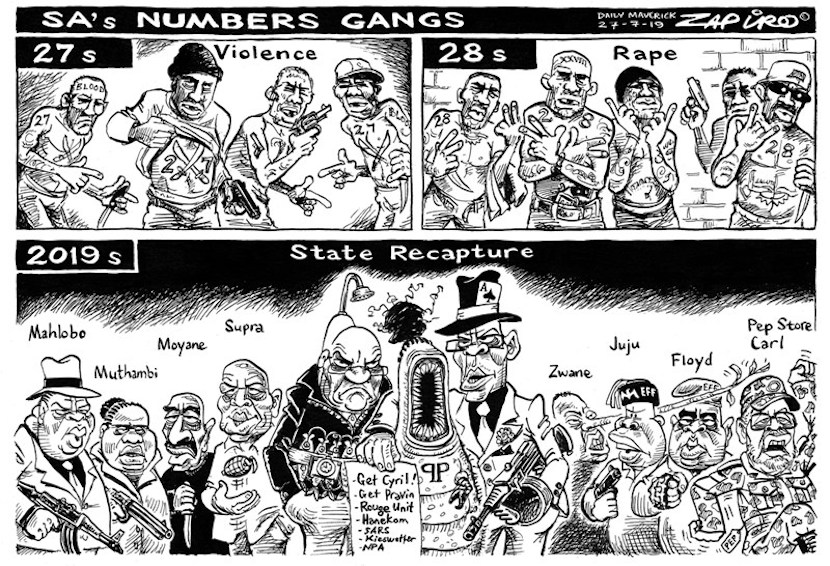 President Cyril Ramaphosa, along with the Hawks and the National Prosecuting Authority (NPA), made several promises to South Africans that they could expect to see government officials being clapped in irons in a corruption crackdown. Some of us rolled our eyes with a resounding, “ja, right”, while others decided to keep a (somewhat) open mind.

However, it seems as though promises have been kept and the recent warrant for Ace Magashule’s arrest is just one of over 100 prosecutions that have happened in the past few weeks.

If you were one of the doubting Thomases, it’s time to take a seat and read on.

Of those arrested for corruption, the list includes high-ranking police, government officials:

1. Deputy national police commissioner Bonang Mngwenya who faces charges of corruption, fraud and money laundering for her alleged role in ensuring that a R191m contract was awarded to Instrumentation for Traffic Law Enforcement in 2017. She reportedly has a close relationship with the company’s owner.

2. Eleven senior government officials, including former state security minister Bongani Bongo were arrested for alleged fraud in Mpumalanga in 2011 and 2012.

3. Four senior Gauteng officials were arrested by the Hawks in October for tender irregularities amounting to R1.2bn at the Gauteng Health Department in 2007.

5. Northwest municipal manager Cassius Sebatane Sejake was arrested by the Hawks after failing to follow due processes in the awarding of tenders of almost R6m between 2018 and 2019.

6. Three Limpopo officials in the Department of Home Affairs were arrested at the end of October for allegedly demanding a bribe of R10,000 instead of arresting a man who failed to provide necessary documentation for being in the country.

7. Malawian preacher Shepherd Bushiri and his wife Mary were arrested last month for allegedly defrauding investors to the tune of more than R102m. Bushiri also faces allegations of fraud and money laundering, as well as defamation and sexual assault.

9. Phumza Phoshee Gambula, a company director, was arrested in October for defrauding the OR Tambo District Municipality in the Eastern Cape of more than R4.8m.

10. Gauteng police station commanders Samuel Maredi and Zoleka Joyce Kuboni allegedly issued firearm licences fraudulently. As it stands, 28 people – of which 17 are police officers – have been arrested in connection with the scheme.

11. Dedre Van Rooyen, a Newcastle municipality worker, has been granted bail after being accused of siphoning R3.1m since 2012 for her personal benefit.

12. Eunice Mayizole and Mongezi Sikhumbuzo Mayizole have been arrested for allegedly impersonating tax practitioners and registering taxpayers on the SARS e-filing system. The couple submitted fraudulent information resulting in unlawful refunds of R2.6m.

14. Johan Mandla Mathabela, assistant director at the Mpumalanga Department of Education, allegedly colluded with two others to siphon about R300,000 from the department. The money was paid to day care centres not registered with the department.

15. Durban-based CEO of Blackie Plastics Suman Panday and a stock clerk were arrested for allegedly trying to bribe a chicken farm employee with R60,000 to influence a tender.

16. Two traffic officers were arrested after they allegedly impounded a truck on the R101 in North West for unspecified reasons, thereafter demanding a R5,000 payment to release it.

17. A warrant officer in Polokwane was arrested for demanding a bribe from a drug dealing suspect to make the docket in his case disappear.

18. At least 11 people have been arrested for benefiting from illegal UIF Covid-19 TERS payments.

20. A Polokwane couple was arrested by the Hawks for fraud and corruption amounting to R2m. The husband – an employee of the Helen Joseph Hospital in Johannesburg – registered his friends’ and families’ companies on the Gauteng provincial government supplier database. These companies would receive payments without rendering any services, which would be transferred to his wife’s accounts.

22. Five traffic officers in the Eastern Cape and four driving school owners were taken in for colluding in the issuing of learner’s and driver’s licences in return for money.

24. Naaym Hardien, a materials planner at Sedibeng Breweries, caused his employer to lose R60m because of fraudulent invoices that were paid for stock that was never delivered.

25. A North West municipal worker at the Maquassi Hills Municipality offered to cancel a client’s R1m municipal debt in exchange for R112,000.

26. Former VBS Mutual Bank financial officer Philip Truter is accused of siphoning money through various accounts between April 2016 and March 2018. He entered into a plea bargain with the NPA and will testify against his co-accused in the theft of R2.2bn and the fraudulent measures used to cover it up.

27. Former chairperson of VBS Mutual Bank Tshifhiwa Matodzi is believed to be the ‘kingpin’ behind the R2bn theft and he may have personally received more than R300m.

28. It’s alleged that VBS CEO Andile Ramavhunga received payments of more than R23m from the bank.

29. Former VBS treasurer Phophi Mukhodobwane, who received more than R17m in payments from the bank, came forward with information in 2018. He has called the investigation into the bank a “racist farce“.

30. Ernest Nesane and Paul Magula are two officials from the Public Investment Corporate (PIC) implicated in the collapse of VBS. Nesane is alleged to have received a R7.4m bribe to look the other way.

31. Moloko Stanford Maila, a former ANC Member of Parliament, appeared in court this month with Maphala Lazarus Mosena, Manase Steven Makgatho, and Lepota Eric Makgatho in connection with a theft case of R4.8m. Maila and others allegedly awarded a farming tender to a company linked to the wife of the senior municipal official without following due process.

32. Thoshan Panday is accused of providing temporary accommodation to the police at inflated prices during the 2010 FIFA Football World Cup. He faces 261 counts for fraud and has been linked to Edward Zuma and Jacob Zuma’s cousin Deebo Mzobe.

33. Former KwaZulu-Natal police commissioner Mmamonnye Ngobeni is accused of trying to stop investigations into Panday, who reportedly paid for her husband’s birthday party. Ngobeni is currently at large.

34. Former ANC MP Vincent Smith handed himself over to police on charges of fraud and corruption in relation to money he allegedly received from Bosasa.

35. Former Bosasa COO Angelo Agrizzi was charged earlier this month for his role in making the payments to Smith.

36. Olly Mlamleli, Mangaung mayor and former provincial human settlements MEC, was arrested in relation to a R230m contract to remove asbestos from houses in the Free State – with only R21m worth of work alleged to have been completed.

37. Blackhead director Edwin Sodi, who appeared alongside Mlamleli, is at the centre of the R255m asbestos audit tender scandal.

39. Nonhlanhla Pamela Hlongwa, a supply chain manager in KZN Premier Sihle Zikalala’s office, was arrested with three others by the Hawks in connection with a R24m catering tender.

40. Ziphathe Cibane, chief financial officer in the KZN premier’s office, was also arrested in connection with the catering tender matter.

These are just some of the arrests that have been made. Sure, the wheels of justice have turned excruciatingly slowly and there’s plenty of room for improvement, but the fact is that things are happening. Now, we just have to hope that the scoundrels actually end up behind bars.

Fight against corruption and state capture

The fight against corruption and state capture has required extensive measures to stabilise and revitalise our law enforcement agencies, with capable and ethical leadership able to restore the credibility of these vital institutions.

Much work has been done to ensure these agencies have the personnel, skills and resources they need to undertake the demanding tasks of detecting, investigating and successfully prosecuting instances of corruption.

A crucial part of this work has been to improve information sharing, coordination and cooperation among all law enforcement agencies and related institutions.

This is evident in the revitalisation of the multi-agency Anti-Corruption Task Team, which currently has 223 prioritised cases at different stages of investigation and prosecution.

In May this year, we established the fusion centre based at the Financial Intelligence Centre, which serves as an operational hub with dedicated resources to fight COVID-related corruption.

Since the beginning of this 6th Administration, the Directorate for Priority Crime Investigation – also known as the Hawks – has established task teams to fast track corruption investigations in municipalities, government and the private sector.

Together with the National Prosecuting Authority, the Hawks have prioritised 10 priority corruption-related cases to fast track for investigation and prosecution.

Honourable Members would recall that in April 2019, I established the Investigating Directorate within the NPA to focus on serious corruption and state capture.

To enable the Directorate to address complex and organised corruption, personnel have been seconded from the South African Police Service, the Hawks and the Independent Police Investigative Directorate (IPID).

Recent amendments to the regulations of the State Capture Commission now allows the Commission to share information, records and documents directly with the Investigating Directorate and any other law enforcement agency in South Africa.

With the establishment of the SIU Special Tribunal in February 2019, the Special Investigating Unit is now able to fast-track civil claims and recover funds lost to corruption.

These bring together several law enforcement agencies and stakeholders to tackle corruption in an integrated manner.

It has established the Illicit and Criminal Economic Activities Division, which also focuses on investigations into state capture and tender abuse related to personal protective equipment fraud.

Beyond the work of the law enforcement agencies, the fight against state capture and corruption has also been taken up in some of the state-owned enterprises.

In PRASA, for example, 28 matters have been referred to the SIU for investigation and the Hawks are investigating a number of case dockets emanating from the Public Protector’s Report on the agency.

Transnet is another case in point. It has established a case management platform involving the various law enforcement agencies and relevant regulators to collaborate in their efforts to ensure recovery of losses and disciplinary action, which could also lead to criminal prosecution.

As a result, several matters have been referred to the NPA for possible criminal prosecution and to the SIU for investigation.

Transnet has also instituted numerous civil recoveries in the High Court against various individuals and entities.

Much of the past two years has been focused on building up the capabilities of the institutions that we rely on to combat corruption and state capture.

As Honourable Members will have seen in recent months, there has been clear evidence of progress in bringing cases to court. Work is underway.