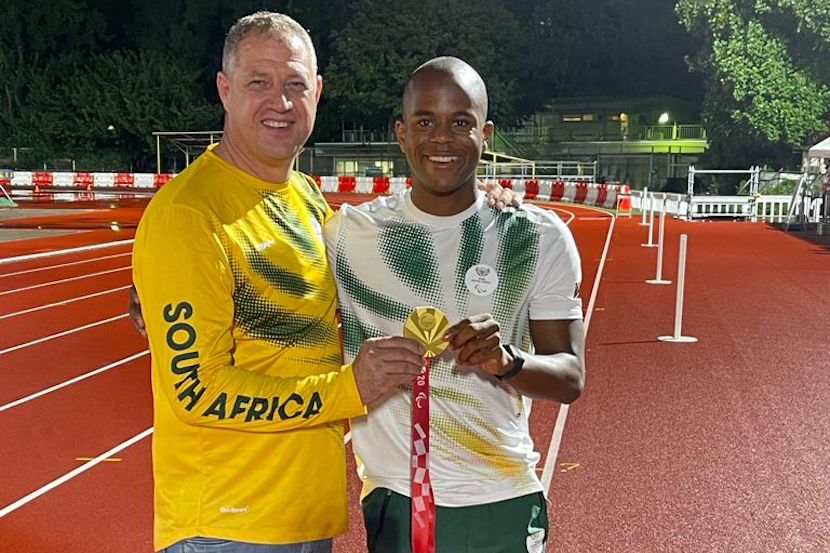 Ntando Mahlangu, a double amputee from Pretoria, became an international sensation when he won double gold medals at the Tokyo 2020 Paralympic Games. Ntando stormed to the finish, clinching gold in the Men’s 200 T61 and then not only managed to win another gold medal for the T63 long jump; he broke a world record with a final leap of 7.17 metres. What empowered this teenager to fly and succeed was Pretoria prostheses expert Johan Snyders, known as the Blades Doctor. Snyders not only gives mobility and athleticism to young amputees (through his charity Jumping Kids) but also enables them to get an academic qualification. BizNews caught up with him at his Pretoria residence and asked him whether he expected Ntando to do so well – and there is a surprise appearance of Ntando at the end of the conversation. – Linda van Tilburg

I think Ntando did really good. We didn’t expect everything to go the way it went. He’s a 19-year old attending school in Pretoria. To keep a matriculant busy, we looked at long jump as a possibility? We had a chat with a local long jump coach and he did really well. We were looking to steal a bronze medal, but the gold and the world record wasn’t in the mix. We didn’t think about that. It was really special.

I have [been] involved in disabled sport for a number of years. After the 2012 Games in London – I met Ntando just before the games – we fitted him with a set of prosthetic legs. You should be fairly familiar with double above-knee amputees – most of them will be in a wheelchair. If we look at the functional ability of double above-knee amputees, mobility is fairly limited. When I met Ntando the first time, he said to me that he would like to run and he would like to play football. Being a South African and seeing what the youngsters are doing, they’re constantly chasing after the ball.

It made sense, rehabilitation wise, to fit him with a set of blades and then see him grow. It’s just been phenomenal. We’re looking at what Richard Whitehead (UK paralympian) is doing. At a similar stage, [he] ran a sub-one minute 400 metre. I think that inspired a lot in what we can do with these youngsters. We fitted Ntando in 2012 and he was doing so well at school – he was in a disabled school in Pretoria – but they had a very limited curriculum. At 16, they normally try to get these youngsters to go out. That’s what the academic curriculum provides.

We just saw potential in him, [so] we moved him into a mainstream school in our area. It’s a primary school – and predominantly Afrikaans. When we made the arrangements, he had to learn an additional language. We also kept him back a year so he can work on mathematics because we feel that education is the only way to change the background of these youngsters. There is this history; 2016 he went to Rio as a 14-year old. He got silver in Rio, [which was] crazy. A lot of doors open, so going to high school made life much easier.

The progress [from] 2016 to 2021 has been phenomenal. He’s doing really well as an athlete – but he’s also doing extremely well as a kid in a mainstream school with kids from diverse, different backgrounds – where a thousand boys in a school are being confronted with kids with disability playing football. If you give him half the chance, he’d play rugby.

Johan Snyders on the win in Tokyo:

Tokyo was extremely emotional. I had a chat with him about the long jump. We had quite a few of these chats. The long jump coach couldn’t get accreditation to go to Tokyo, so he was in Pretoria and I was next to the field. I had a WhatsApp call to him and we had a video that was sent over. We have to do an analysis and then chat to him before he does his run-up.

As a 19 year old, he’s so level-headed. I think he was so well-prepared, mentally, that the stress associated with something like the Paralympic Games was easier for him. Our aim was seven metres – and the aim was to see if we could potentially steal a medal because he’s competing in the same category as their single above-knee amputees. There [was] a Danish, German and a Japanese athlete that potentially could have taken it. He was the odd one out.

When he jumped the seven on his first [go], I think he upset everybody in the group and the guys got stressed – and he was actually quite relaxed. Then he had a couple of jumps, I think, having some fun.  On the last jump; what a phenomenal jump – over seven metres. I come back to what I said earlier, that the majority of above the amputees, their point of reference is a wheelchair. So for a double above, to be able to generate that amount of speed and acceleration – and then jump over seven metres was really phenomenal. I think he was extremely emotional when we realised what happened.

Johan Snyders on his background:

Im an orthotist/prosthetist by profession. I have a keen interest in the application [and] I’ve got a very active paediatric clinic in Pretoria, where we take care of various kids of various ages. We try to encourage kids to be active and develop big motor skills at an early age. Kids only play when they’re young. So, they only develop when they are young. You have a very small window (about up to 12), where you can work with children and encourage them to participate in sport.

If you can get them interested – especially in South Africa [where] we have a lot of challenges when it comes to education – at the young age and they can compete at the national level and they get their provincial colours, then for us to apply to a mainstream school for a bursary or placement for a kid is possible. That’s actually what we try and do. We are trying to manipulate the system almost for people to have buy-in, to have a possibility for kids to go to mainstream schools.