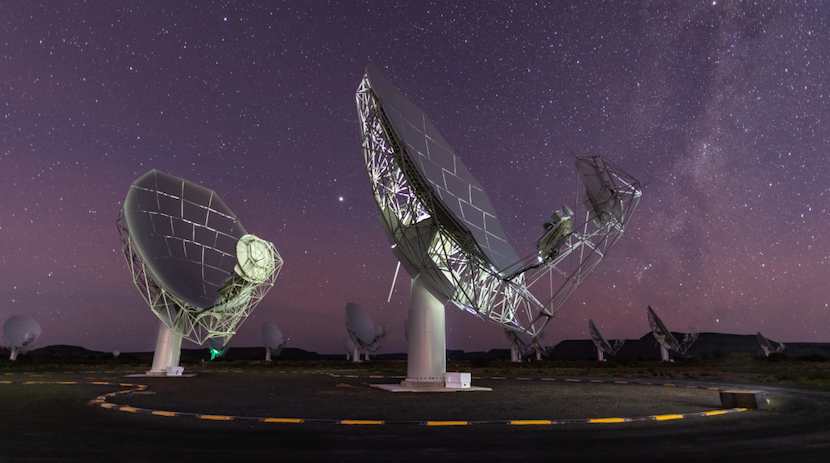 In the quietest corner of the Karoo, stands the 64 dishes of the MeerKAT radio telescope, which enables leading scientists to conduct research on the centre of the Milky Way – 25,000 light years away from Earth. MeerKAT is a precursor of a much larger project, to build the SKA (Square Kilometre Array) in SA and Australia. It will eventually extend into eight countries. The project was given the go-ahead in June 2021. Upon completion, it will be the world’s largest radio telescope. It is a testament to South African scientific capability and innovation, with Professor Justin Jonas (Rhodes University) as the scientist engineer – as well as founder and driver of this ambitious project. He told BizNews about how it created a new generation of scientists, about the data pouring from the telescope, his experience in developing ventilators – and how dealing with the health department made him an even bigger believer in a systems engineering approach. – Linda van Tilburg.

We’ve had radio astronomy in South Africa for quite a long time, since the 1960s. Radio astronomy itself is a very young science, because it relied on radio – and that’s only been around for a century or so. We had some small facilities – by world standards – in South Africa, Hartebeesthoek Radio Astronomy Observatory in Gauteng. Towards the beginning of this millennium, we became aware of this international project to build, really, the biggest radio telescope in the world. It was called the SKA/ It started in about 1990, people had been sitting down and saying, “this is what we need to do.”

In order to stay current in science, your instrument has to grow bigger and bigger – almost exponentially – because you just do all the science that you could have done with the one that you have and you have to get the next bigger, better one.  Radio astronomy had got to a point where to build the next bigger one would require something 10 to 100 times bigger than what was available. For one thing, that was a big technical challenge – but also a financial challenge, because this would really be an expensive instrument. It was realised, right from the start, that this thing would have to be international.

You would need to harness the minds of engineers and scientists from a large number of countries, and importantly, the money to build this thing. It was no longer going to be one country could do this. Well, perhaps the US might do such a thing. In fact, they’ve got a project going – which is, in a way, parallel to the SKA. South Africa had a good legacy in astronomy in general (both in optical and radio) and of course, the H.E.S.S gamma ray telescope in Namibia. The Southern Hemisphere is a good place to do astronomy for all sorts of reasons. Wide open spaces is one of them.

On the background to the SKA (Square Kilometre Array):

Round about 2000, the SALT optical telescope was being built in Sutherland and the Department of Arts, Culture, Science and Technology (which is now the Department of Science and Innovation), together with the National Research Foundation, said, “we’re building SALT now. What’s the next big thing we’re going to do in astronomy? We have a geographical advantage. Is there something that we should be looking at?” Ideas were asked and people had persuaded me that perhaps I should go look at this SKA thing and see whether it was something South Africa could be involved in. I made some contacts with colleagues abroad and they said, |we’d love to have South Africa on board.” Long story short, we escalated to saying [that] we will bid to host this thing, because there was a request put out for proposals to say who’s going to host this thing. We put in a proposal on behalf of South Africa and Africa in general.

On the SKA (Square Kilometre Array):

We had incredible support from government [and the] private sector, where needed. We put in a bid, which was eventually successful. South Africa was declared the best place, but in the end, there was sharing with Australia – which also had a very good site. The SKA actually consists of two quite different telescopes, quite separate facilities. There was this natural split, [where] Australia gets what’s called SKA low – the low-frequency instrument – and South Africa (or Africa) gets SKA mid-frequency, no instrument.

While doing all of this, we thought, “we’re bidding for this thing and we could be unsuccessful.” We didn’t know, and it was felt that South Africa (and Africa) should have – irrespective of the outcome of the site bid – a large radio telescope of its own, in order to get involved in the engineering work that was required for the SKA (to train up our local engineers and also provide our scientists with suitable training).

On what SKA (Square Kilometre Array) is:

The name is ‘Square Kilometre Array’, which these days is a bit of a misnomer. But the end goal is to build a receiving area of a 1 million square metres – which is equivalent to a square kilometre. You can think of something like 1 million DSTV dishes – and it’s like that. You don’t build one big thing. You build lots of medium-sized things and you add them all together. For instance, a MeerKAT antenna is 13.5 metres in diameter. An SKA antenna is 15 metres in diameter.

You kind of need in the order of 1,000 of those to get a square kilometre. What we’re doing at the moment is working towards SKA phase one, which is more like 200 antennas –  kind of like 10% of what’s imagined eventually. These antennas (for SKA phase one mid) are in the Karoo. They extend out to 100 and something kilometres in extent.

You dot these antennas out – there’s a concentrated core of them in our central location in the Karoo.  Then they sort of spread out into the surrounding area. Eventually, when you get to the full SKA, those will extend all the way into what we call the African partner countries. Our neighbouring countries – and beyond there as well. Up to Kenya and the islands too; Madagascar [and] Mauritius. That’s the big picture going into the future. But at the moment, what we are sitting for is phase one.