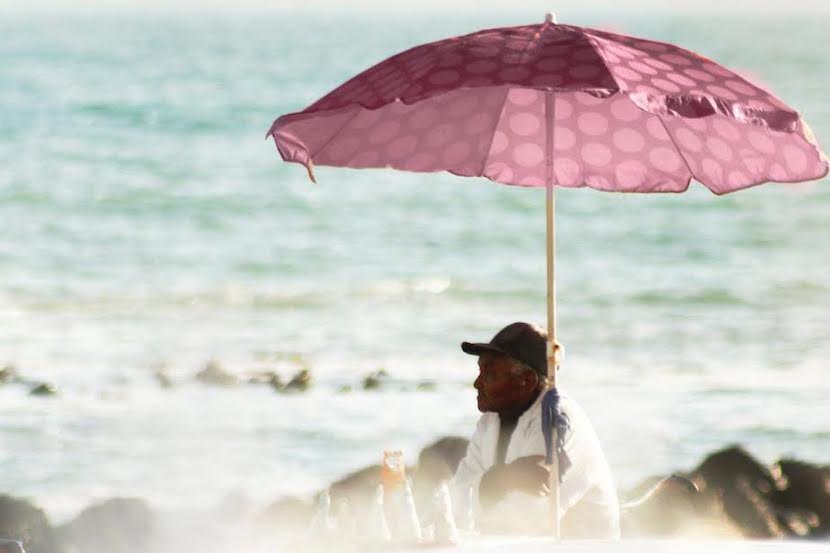 In Bloubergstrand in the Western Cape, there is a well-known face that has been selling ice cream to the local community since the 1970s. He is 71-year-old George Phontshe Peni from Khayelitsha and many people in the area have a story about the kind heart of ‘Uncle George’ as he is known by locals. A resident, Michelle Nel, decided to raise money for his pension through the BackaBuddy platform. Nel told BizNews she was amazed at the response to the campaign. – Linda van Tilburg

How Michelle found out about George’s backstory

I have been living in Bloubergstrand for over 10 years now and you cannot help but notice a person who works with the dedication George does, especially for an older gentleman. We see him every other day, even when it’s cold, selling ice cream. You start to wonder about his story and where he is from. I began chatting to him almost a year ago to find out about his background, where he was from and, because of the language barrier, he wrote down his story. It was a little bit illegible. I tried to use Google translate but when you correct one letter, it changes the whole meaning of the sentence; it was difficult to translate it.

Eventually, I took it to a family friend who speaks Xhosa and she translated some of it. What I understand is he has been selling ice creams for over 40 years in Blouberg. He said he came from Khayelitsha every day. It was interesting that someone would travel so far, selling ice cream from his bicycle. It did not make sense to me; why was he even paying the fare if he wasn’t selling enough ice cream in a day. But he is always here. I wondered what he would do when he couldn’t sell ice creams anymore. Because of his age now, he no longer rides his bike but pushes it along. I found his dedication and contentment which he still brings to work every day incredibly interesting.

Everybody in Blouberg has a story about Uncle George

I asked George what it is about Blouberg that he loves so much and he responded, the beach and the people. He loves the people in the community. Obviously, it’s a reciprocal relationship because the people of Blouberg are so fond of George. If you read the comments on the BackaBuddy page, everyone has the most amazing stories about interactions they’ve had with him.

Before I started the fundraiser, there was quite a bit of admin hoops to jump through; you need to have a bank account, I needed his ID and I didn’t know if he had any of those things. We have a WhatsApp group in Bloubergstrand called, Blouberg Friends and I asked whether anyone knew George and if they would be interested. I thought perhaps no-one knew his story and that nobody was going to be interested.

You never know with these things. Then the responses came in from people saying how he has handed out ice creams to children when they didn’t have cash on them. One of the ladies said it is such a worthy cause; they had helped him push his trolley up the hill and he gave them free ice cream. It has just been amazing. Another woman told how, just before her father passed away, one of her last memories was when they sat outside on the bench outside Ons Huisie enjoying an ice cream that they’d bought from him. Everyone commented on how humble and down-to-earth he is. Everything about him, he is such a fine person, that is just his nature.

When fate knocks on your door

As life goes, you kind of forget and go on, and I still had this pressing feeling that I needed to help this man. Somehow, we could all come together to help him. He showed up at my doorstep and asked if we could assist him with a taxi fare home. He hadn’t made enough money to take a taxi home that day. That was when I realised we need to escalate this, put it out there. My husband came up with the idea to utilise the BackaBuddy platform. It was perfect. I thought, this is meant to be.

Going beyond the initial target of R50,000

The initial target was R50,000 and before all of the press reports, about R23,000 [was raised], which was almost halfway. And then this story started rolling onto the news platforms, and now we are just over R70,000. It is amazing to see the response and the kindness of everyone. So, it’s just a very uplifting story, people are blown away by how people want to help one another.

I have spoken to one of the people at BackaBuddy, and usually, once the target is reached, fundraising stops. However, it is gathering more funds. So, it seems like it will keep on going.

What is George doing with the money?

He has apparently been adding some walls and furniture at his home and is inviting everyone to come and visit once he is done with it. It is quite special to use some of the funds for the house. We haven’t been there but we want to follow up and visit and share it with the rest of South Africa.

At 71, he plans to keep on selling ice creams

He is planning to keep going. It’s what he’s been doing for well over four decades; it is what he knows and it keeps him going, I guess. At least, now, there is that extra buffer for him, that extra bit of money. He is in his 70s. How amazing is that? It wouldn’t have been possible without everyone’s help. I am just so grateful to see how Bloubergstranders and South Africans have stepped up. When we stand together; we can really make a big difference.