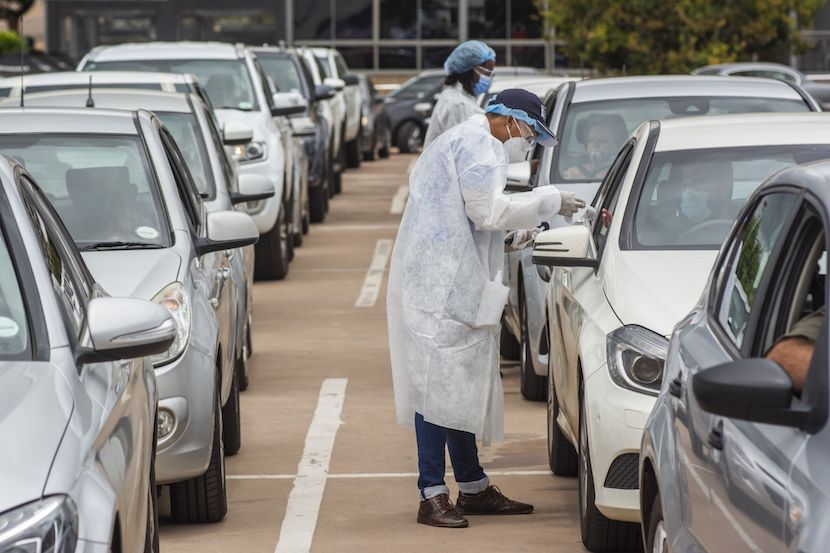 Discovery Health CEO Dr Ryan Noach joined the BizNews Power Hour to discuss the severity of the Third Wave. Currently raging in Gauteng, Noach discusses the Covid-19 pandemic from a South African perspective. Talking to Alec Hogg, he says SA’s daily infections are 30% above where they were in the prior peak of the second wave. – Jarryd Neves

Dr Ryan Noach on the third wave and why it’s more virulent than the first and second waves:

I wish I was wrong a week ago, but we’re seeing new deadly infections 30% above where they were in the prior peak of the second wave. We haven’t seen the likes of these infection numbers in Gauteng before.

Our view about Gauteng is that it was one of the least affected provinces. On our estimates, about 45% of Gauteng had been previously infected with Covid-19. If you compare it to the Eastern Cape, for example, our estimates were 90% + had a previous Covid-19 infection. That means that underlying immunity in Gauteng is really absent. There are no antibodies through previously infected people.

So we think that predisposes Gauteng, potentially, to a very bad wave. We said this before the wave began – unfortunately, it’s proving to be correct. I think the scary part is that hospitals are quite full already and the hospital admissions tend to follow about two weeks after the infections. With the infection numbers we’ve seen the last few days, we’re very worried about what happens in the hospitals [in the next] two weeks.

On the Eastern Cape and other provinces:

It’s extremely dangerous to make predictions about this disease, which is unpredictable and which surprises us around every corner. How I would put it, is to say that if the Eastern Cape does experience a surge, we think it will be much lower than wave two – and that it will be a more manageable surge. Again, we do not have a crystal ball and it’s not possible to predict how this disease unfolds. The Northern Cape was interesting. It went through a terrible third wave – but it’s on the way down the other side now, reducing daily infections which is quite reassuring.

North West seems to have also potentially reached the peak – and that’s looking good. Limpopo has had a terrible third wave and it’s still on the way up. KZN had a very high infection level, in our view, from previous waves – where we put the Eastern Cape over 90% and Gauteng below 50% – we had KZN round about the 80% mark. We think, also potentially, protected against the severe surge. But it is a large population and relatively densely populated, so we’ll have to wait and see.

On the Free State and Western Cape:

Free State seems also to have peaked in this wave. We’re hoping that it’s on the way down. Western Cape escalations have been quite high over the last few days. We positioned their previous infections at about the 60% mark. What that means for us is that it’s quite difficult to predict, because it’s on the edge of that so-called herd immunity threshold. We think there is some risk in the Western Cape and all over the country. People should be very cautious – but particularly we think Western Cape and Gauteng at the moment.

On the challenges of interprovincial travel:

Interprovincial mobility is a huge problem, because we do end up just seeding the infection all the way down the the path that we take to wherever our destination is. The strong advice – and I couldn’t be more firm around this – is to stay home. Lock yourself up in your home, pretend that it was that same period of Level five restrictions. Try and do all your shopping online and really confine yourself to your home until this settles – for at least a couple of weeks. I think given the economic pressures in the country, the government may not be able to enforce a Level five lockdown – they may choose to, but I think it’s a very difficult decision with that tension with the economy. We should, from a behavioural point of view, try and give effect to it.