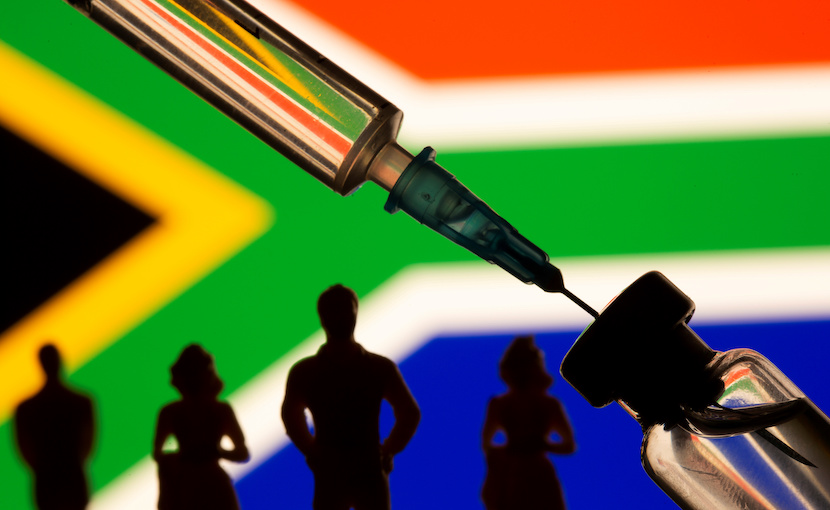 Veteran South African journalist, Brian Pottinger, asks some very searching questions here, sparked by what seems to be SA’s most absurd anti-Covid-19 measure yet. That is the branding of SARSCoV2 as a ‘Group 3 Hazardous Biological Agent’, which widens the scope of employers to enforce vaccine mandates in spite of an early clutch of vaccine-mandate-favouring CCMA rulings. Like many good journalists, Pottinger goes to motive and doesn’t like the conclusions he reaches. First, however, he paints what appears to be a convincing context, complete with examples of governments abusing their powers by putting the fear of death into their populations. Add to this what we’ve learnt along the way and how our authoritarian response blindly follows the global pack and we’re looking at a darker narrative: a pandemic management history rotten with dishonesty at every level. Maybe that’s why the going has got even weirder, posits Pottinger. – Chris Bateman

Amid all the justified public rage, suspicion and ridicule about the latest fiasco of the amended Covid-19 regulations, the most alarming aspect seems to have slipped by almost unnoticed. President Cyril Ramaphosa’s government has unprecedently branded SARSCoV2 a Group 3 Hazardous Biological Agent, thus giving wide powers to employers to force their workers to be vaccinated against an expiring coronavirus in the last stages of a dying guided panic.

Prior to the Gazette on 16 March 2022, Business Unity South Africa (BUSA) had quietly indicated they would no longer seek a Constitutional Court ruling on the legality of forcing employees to be vaccinated under duress. They knew what was coming and probably did not want a judgment anyway. They rolled over, were typically complicit.

Section 43 of the Occupational Health and Safety Act, 1993 (Act No 85 of 1993) was designed to protect workers in businesses where hazardous biological agents are “produced, processed, used, handled, stored or transported”. Incredibly, this provision has now been applied to an endemic coronavirus and extended to all employees everywhere.

The decision might yet prove one of the most fateful of President Ramaphosa’s deeply challenged presidency and a test of the good faith of South Africa’s big employers during the last two years. Nothing better indicates President Ramaphosa’s insistence, and that of his rapidly narrowing and secretive band of advisers, to force mandatory vaccines come what may. Why?

Let us quickly summarise what we have gathered about the SARSCoV2 outbreak of 2020 and its symptoms known as Covid-19.

We know the death and infection projections of the scientific academic scientists who got us all locked up were wildly, maliciously and fantastically wrong. Professor Mark Wodehouse, one of the top advisers to the UK Government during the initial panic, described them in his jaw-dropping book, The Year the World Went Mad (Sandstone), as not remotely plausible.

We have learnt that data collected by the World Health Organisation (WHO) and its reporting agencies was manipulated to exaggerate infections and deaths. In many countries those statistics are now being qualified, revised down or disclaimed. Go check the WHO’s dashboard.

We know excess deaths, once all allocated to Covid-19, have proven to be equal only to a severe decadal coronavirus when controlled for natural mortality growth, misdiagnosis, routine excess winter deaths and the huge number of collateral deaths caused by the criminal withdrawal or delay of medical cover to the public, ostensibly to serve the Covid-19 patients who never arrived. These friendly-fire deaths are now quantifiable through the huge increases in non-Covid-19 insurance death claims.

And we know the status of PCR and RT-PCR testing kits, the go-to tool supporting the narrative of mass species extinction, was withdrawn for emergency use by the US Federal Drug Agency (FDA) in July last year and from 1 January this year, the CDC no longer uses them. Research showed they were unreliable indicators of infection. South African authorities insist on still using the kits. Why?

Professor John Ionnidis of Stanford University Maryland researched 61 studies of sero-prevalence, an analytical system based on measuring the pathogen level in a population through blood serum as opposed to cooked official stats and flawed test kits. His report put the global infection fatality rate (IFR) at 0.15%, equal to the Asian Flu Pandemic of 1957 or the Hong Kong Flu outbreak of 1968, which the species evidently survived without extraordinary measures. It was 0.05% for those younger than 70 years old, less than a common flu. Since then, fatality rates have dropped even further as milder forms of the virus naturally and predictably evolve. No credible scientific challenge has been raised to his findings.

Now let us get to vaccines.

Now we are told, most recently by President Ramaphosa, the scientific evidence shows they reduce the intensity of infection and likely death. Really? The evidence, in fact, shows the data is not controlled for age and cause of death or time since last inoculation nor, critically, for a decline in fatalities due to a naturally and predictably diminishing pathogenic intensity of the evolving virus. Again, we are told we need 70 per cent population vaccination to reach national immunity. Then we are told it is not enough that 80 per cent of us have in fact been infected.

Intriguingly, no manufacturer of these treatments calls their product a vaccine: that would breach the trade practice and drug control regulations in every jurisdiction in the world. Only the promoters of the official narrative, including the South African Government, mainstream media and employers continue to mislead.

The containment measures adopted by panicked governments, ours included, have veered from the ludicrous to the catastrophic. A credible trination research project published last month by researchers at Johns Hopkins, Lund University and the Danish Centre for Political Studies shows total lock-downs with all their devastating consequences prevented at most 0.2% of deaths compared to simply trusting people to do the right thing. Boris Johnson’s lot, according to the research, caused untold and lasting economic, social, political and psychological damage to save at most 100 lives. South Africa had one of the most severe lockdowns in the world. For what?

The United States Supreme Court, on 13 January 2022, ruled that only Congress can mandate compulsory vaccination and not the Occupational Safety and Health Administration’s Emergency Standard on Vaccination (OSHA ETS), thus opening the possibility of humungous lawsuits by employees forced under duress to get the shot, a signal warning to South African employers as to what will happen when the Constitutional Court certainly reverses these unconstitutional regulations by inferior legal bodies enacting administrative law.

Austria hastily scrapped its compulsory vaccination laws after a month as illegal and unworkable. Across the world, Covid-19 restrictions and vaccine mandates are being repealed in their entirety. Only six per cent of South Africans in a recent City Press poll supported tougher measures and other research showed a strong opposition amongst particularly Africans to compulsory vaccinations.

Investors in Pfizer and Moderna, meanwhile, are dumping their shares and heading for the hills: moneymen can unerringly sense when a good party is about to turn into a very, very nasty one.

In short, the orthodox version of the SARSCoV2 outbreak as historical epidemiology, virology and pandemic control is in piratical tatters.

Yet, incredibly and despite this long litany of bad science and worse faith during the SARSCoV2 outbreak, the memo seems not to have reached President Ramaphosa. His authoritarian new regulations now seek to hardwire arbitrary and dictatorial powers into the future life of the country on the back of a comprehensively and maliciously misrepresented viral outbreak. Why?

His government’s almost instinctive inclination to do the wrong thing at the wrong time may be one answer. A natural desire to hold onto all autocratic levers possible as we head for the usual violent turbulence of another democratic ANC internal leadership contest, may be the other.

After all, if the Chinese can use a suspiciously fortuitous Covid-19 resurgence to specifically target a secessionist Hong Kong, cripple high-tech supply routes to the west out of Shenzhen, close financial markets in Shanghai and lock up the cheeky Uyghurs and Tibetans, all just as China controversially supports an embattled ally against the West, what grand possibilities exist for us in the use of the terror brand here.

But there is another possible, darker reason for this madness. In a country where the biggest cause of death is the Big C – Corruption – and one with a pandemic management history rotten with dishonesty at every level, we are entitled to ask what lies behind these series of bizarre and irrational decisions and proposals.

The developing world has historically been the dumping ground for obsolete, surplus and redundant medicines by a pharmaceutical sector not always famed for its adherence to ethical practice. There are plenty of vaccines around urgently seeking recipients as developed world nations wind down their demand, patents are challenged and investors flee (not to mention the National Treasury wanting to know what the government is going to do about all those unused expiring vaccines and the R1.2bn Covid-19 emergency reception centre that nobody used). Will we become just another dreary developing world example of bought markets and sold consumers?

The biomedical market, more than most, is full of incestuous self-serving and vested interests. We know the familiar cycle: pharmaceutical companies pay for the research which identifies the diseases which gets the researchers appointed as advisers to governments who pass the laws which force the public to buy the cures. Press repeat. No conspiracy here: just good business. Are we sure our public policy decision-making has been free of such influences at the highest levels?

Catastrophic financial, social and political damage has been done to our society by the imposition of irrelevant, western-derived containment solutions by our ‘Me Too’ and one-size-fit-all epidemiological and virological advisers and their sponsors.

South African society is in a brittle and volatile mood; insurrection, as we know, is not notional. Does President Ramaphosa really want to impose draconian measures to combat an expiring virus in a way that will introduce a modern-day apartheid between the rich and employed, who are predominantly vaccinated, and the poor and unemployed, who are not? Is he willing to strike resonance with the bitterest living memory for many South Africans; bits of paper telling one where one can or cannot go in one’s own country, who can be employed and who not? And for what? For whom?

There is only one way to finally get to the truth of this most extraordinary moment in modern history, our medieval moment. Science and the mainstream media have patently failed us. The courts must judge on these measures. The government must also appoint a judicial commission of inquiry to investigate the nature of the outbreak, its management, the key players involved and their interests, victims, beneficiaries, lessons and above all, the conduct of the biomedical sciences and big business over the last two years.