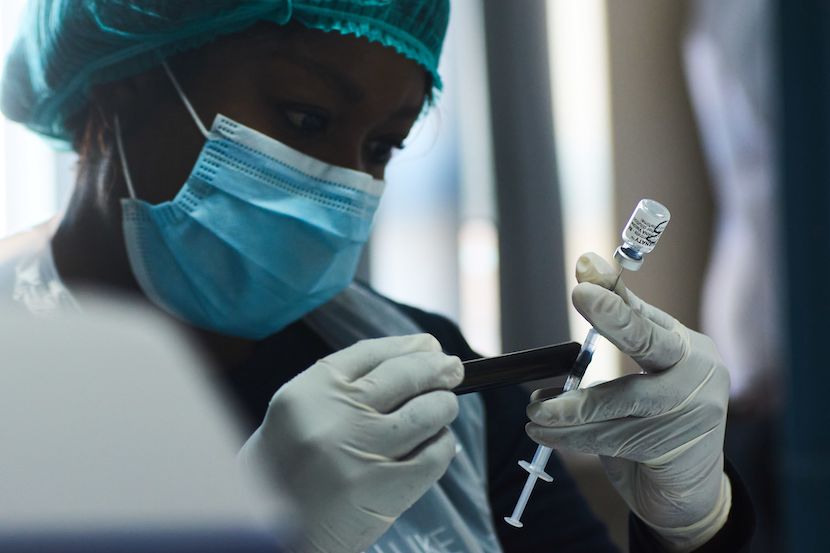 Over-the-top regulation as we continue with a Covid-19 ‘State of Disaster” is risking global ridicule and a huge loss of confidence in government as the Omicron threat fades into virtual obscurity and the chances of a more harmful Covid-19 wave diminish. Here’s the take from a former ICU chief who was at the sharp end of the three far more fatal waves that preceded Omicron. You’d think such a person would lean towards caution. One crumb sports fans will grab from a very lean table is proof of vaccination upon at last being allowed to attend live games, albeit at half-stadium capacity. Prof. Mdladla asks why this is necessary when we already have 80% infection-acquired immunity. Even a slight breeze would disperse any airborne virus unless passionate fans are smooching or screaming into one another’s faces. Read on for this fascinating unpicking of President Ramaphosa’s latest TV Covid-19 twirl. – Chris Bateman

I am busy trying to write a synopsis on what has gone wrong with our Ministerial Advisory Committee recommendations since March 2020, and how we have wasted every opportunity to self-correct and improve for a balanced approach since the initial “two weeks to flatten the curve” pseudoscientific narrative that was fed to the South African public and the world. Then I started getting messages that the president will be delivering a Covid-19 national address at 20:00 on this 22nd day of March 2022…

I have not listened to any of these Covid-19 national address speeches by the president since June/July 2020 because it became abundantly clear that whoever was advising him was either clueless about world events, totally oblivious of the unique South African context or was plainly acting out of personal bias with no thread of science to back up their recommendations. The cynical part of me also believed that the R570bn interest-free loan we received from the IMF and the World Bank had something to do with the non-contextual recommendations we were being given, and that our government just found “scientists for hire” who were prepared to rubber stamp their narrative to stay in line with the loan conditions and dictates!

After the president waffled for more than 10 minutes on tonight’s speech, to eventually state what he has clearly been pressured to do or say, he then produced a litany of mind-boggling contradictions and confusing advisory statements:

These two statements should naturally have been followed by recommendations aligned with that take:

But it was not to be and what followed was just an unbearable assault and ridicule to the extent that as a listener I felt insulted and had to tune off!

I’m certain the president lost a few more defenders of his policies with this last output. A lot of damage has already been caused by the many ridiculous MAC recommendations that started with lockdowns and culminating in the current forced injections for Covid-19 with no scientific basis. In between all of this has been a great disconnect with what has been happening on the ground, here and abroad. With every new intervention and recommendation, the MAC and the president’s office have alienated more and more people to the extent that there may be no other option but for people to do what is in their best interest.

The problem for South Africa has been all the influential players who have sat by the sidelines and allowed a power-hungry government free reign in the interest of “a greater good” while believing individual rights and liberties are a privilege to be dispensed with without any in-depth and unemotional scrutiny.

A lot of damage has already been done on the South African public’s perception and trust in its government and authorities, our media will not do any audits on this or report on the ones they have done for fear of discrediting the government. Further damage is being done on health regulatory bodies and medicine itself due to their acquiescence on the plunder of human rights to bodily autonomy and informed consent.

This last nation address by the president may have been a start of the rapid slide towards zero confidence in all our national institutions that could have held a more balanced approach in managing this pandemic. The true cost of our erroneous policies and interventions is mounting, but with the lack of in-depth journalistic investigation and a demand for accountability from our officials and advisors, we will continue making more costly mistakes.

South Africa is slowly moving towards a police state, under the facade of a health scare.

For some it may have been a privilege this morning not to wear a mask outdoors, in the sun, breathing fresh air, boosting your own God given immunity. For me, like millions of others, this was not a new experience; I have never complied with this senseless unscientific arrangement.

One can be tempted to appreciate Government’s relaxation of certain lockdown measures. However, when viewed within the context of what is currently transpiring, you realize there is nothing to appreciate, but much to be very concerned about:

All of the above is done, not to protect people against a virus, but to control them, to implement a new global order (which was the idea all along, and which is no longer a secret), and at the same time extract spectacular sums of money out of this evil venture.

If there were any prospects of success, one could have demanded that politicians, monopolists, academic institutions, and individuals lay bare their books in order to reveal their financial interests in this sham. We know this will not happen, at least not for the foreseeable future. But we want them to know that we know – and the truth will eventually be revealed. In the meantime, one can only wonder what it feels like when you have sold your soul and betrayed your country and fellow man.

Unless what is currently transpiring is stopped and reversed, we will one day look back and wonder how it came about that we forfeited our freedom. Take note of what is happening, it is currently being taken away from us, bit by bit.