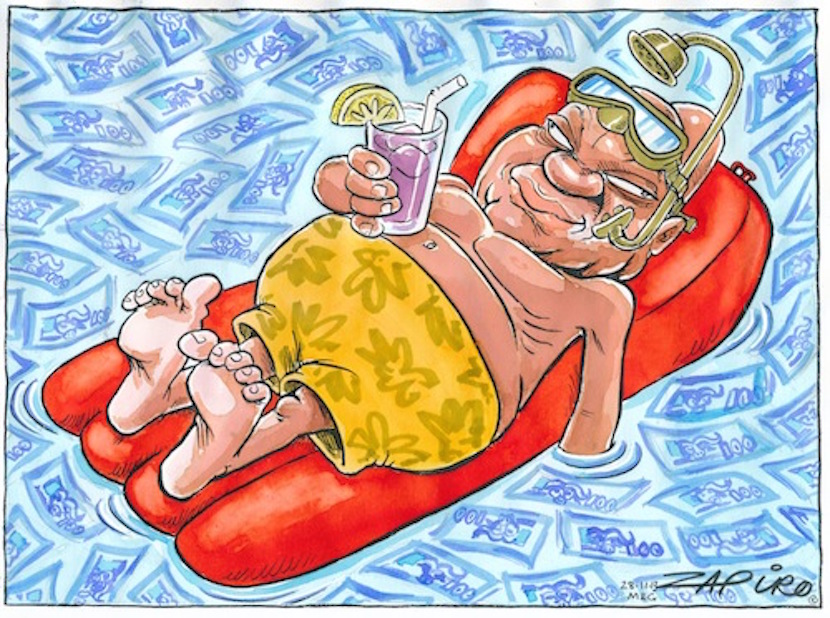 The Nkandla scandal that rocked South Africa shows no signs of subsiding, with more questions being raised than answered over President Jacob Zuma allegedly repaying millions to tax coffers. Even if Zuma has repaid the money, as he says he has, his reputation has been left in tatters by the refurbishments to his homestead at taxpayers’ expense as well as widespread allegations of state capture. A bank no-one seems to know much about – and with links to the state pension fund – has emerged as the funder willing to assist Zuma with a loan to pay off his Nkandla debt. Quite rightly, opposition parties want proof that Zuma is paying back the money out of his own pocket. They also want to know how Zuma’s tax bill will be configured. After all, every other citizen is liable for fringe benefits tax, so shouldn’t the president be too? The Nkandla money mysteries deepen, with politicians warning that this matter is far from over. – Jackie Cameron

Johannesburg – While political parties have welcomed news that President Jacob Zuma has finally paid back R7.8m owed to taxpayers for security upgrades at his private residence in Nkandla, it seems to be a case of too little too late as some shared concerns around the payment and others used the announcement as yet another opportunity to call for Zuma’s head.

In a statement from its leader, Mmusi Maimane, the DA said it was important for Zuma to provide proof to the National Assembly that he personally paid the outstanding amount and that claims that he had received a loan from the VBS Mutual Bank were not a front.

The DA also said this was not the end of the Nkandla debacle and was “only the tip of the iceberg in a corruption-plagued saga”.

“We have previously articulated that President Zuma is liable for R63.9m in fringe benefits tax, and that he must release his tax records in order to ascertain whether this tax has been paid or not,” said Maimane.

The party also wants Zuma’s chief architect Minenhle Makhanya to pay back R155m in inflated costs for the “security upgrades” at Nkandla.

In a short statement, Cope said it would not believe that the Nkandla money had been paid back until it saw proof of payment, pointing out that Zuma had said on numerous occasions that he would not pay back the money.

We have previously articulated that President Zuma is liable for R63.9 million in fringe benefits tax. – @MmusiMaimane #Nkandla

The party also said the payment wouldn’t make things right in the matter.

“Even if Mr Zuma paid this amount of money it will never take away the fact that he has broken his oath of office and that he is no more an honourable president.”

Perfect opportunity to get rid of Zuma

The UDM’s Bantu Holomisa described the payment as a sign of guilt. He told News24 that Zuma had always maintained that he had done nothing wrong.

“Bottom line is he’s paid, admitting to have done something wrong. Now the ball is in the ANC’s court. Can South Africa afford to have a president who has violated the Constitution?” he asked.

Holomisa said the ANC had once again been presented with the perfect opportunity to get rid of Zuma.

“He has given you ammunition to get rid of him. ANC, now show him the gate and he must not resist. Zuma must just go.”

The EFF, in welcoming the news, noted that it was through its efforts that Zuma was made to pay back the money.

“The EFF welcomes the indisputable fact that the money was paid because of the EFF’s insistence and persistence that the remedial actions of the Public Protector must be complied with,” said the party in a statement.

Continuing to sing its own praises, the EFF said South Africans needed to celebrate its work in fighting against corruption and undue benefits to politicians, adding that the national budget now had additional funds because of the president’s payment.

BREAKING NEWS: Loan applicants are already queuing at the offices of #VBSMutualBank this morning #Nkandla pic.twitter.com/OnMTElt4XX

“The anti-corruption work of the EFF should be celebrated because it took our organisation two years to stop the Nkandla corruption, whilst others had failed for many years.”

The EFF has also indicated that it would seek further clarity on the main source and principle that led to VBS Mutual Bank granting a loan to the president. The party claims the bank is supposed to benefit ordinary people in Vhembe. – News24