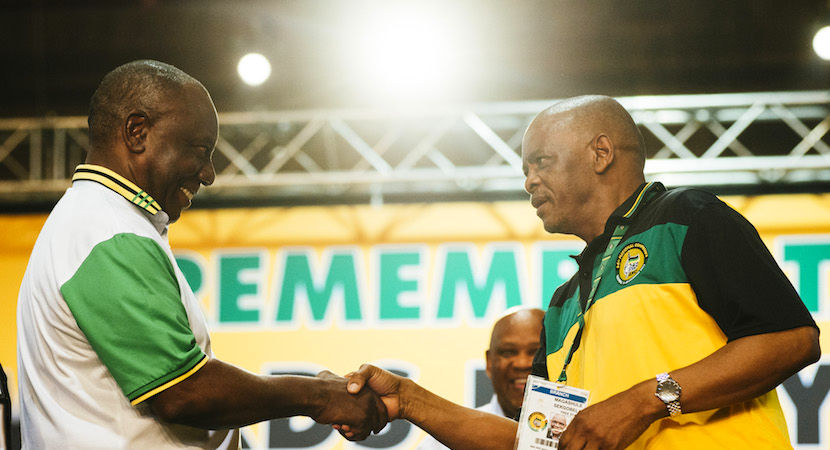 JOHANNESBURG — Ace Magashule has to be one of the most cornered and most exposed politicians in South Africa right now. There’s no doubt that he’s the weakest link in the Zuptoid camp after a photo in the Sunday Times exposed him having a curious meeting with the likes of Jacob Zuma and ousted North West Premier Supra Mahumapelo. The newspaper reported that the meeting was about hatching a plan to oust Ramaphosa. Magashule says otherwise. But there’s little doubt now that he is firmly within the cross-hairs of the Ramaphosa camp – which is increasingly becoming more powerful. He’ll either be forced to switch sides and disclose what he knows or face an untimely political death. Either way, the stupidity and sheer audacity of Ace has now probably come to signal the final chapter and downfall of the Zuptoids in South Africa. Good riddance. – Gareth van Zyl

(Bloomberg) – South Africa’s African National Congress secretary general denied that a meeting he held with former President Jacob Zuma was about a plot to remove his successor, Cyril Ramaphosa.

Ace Magashule admitted that he had met Zuma and other officials in Durban as reported by the Johannesburg-based Sunday Times newspaper but said the talks were about party “organisational issues.” Magashule also held talks with other party officials and members including Supra Mahumapelo, who was ousted as the premier of the North West province.

The @SundayTimesZA story today alleging " a plot to oust our President @CyrilRamaphosa " deserves urgent attention by @MYANC NEC . The alleged clandestine plot , which regrettably includes the SG , comrade Ace Magashule , undermines the unity and renewal efforts of the ANC .

“I am not implicated in any plot, there has never been any plot,” Magashule said in an interview broadcast by eNCA on Tuesday. “There’s no way I can plot against the president of the ANC, he has been elected like me.”

The Sunday Times reported that Zuma, Magashule and other top officials held a secret meeting where they discussed ways to remove Ramaphosa as both the party and country’s president.

Zuma was forced to resign as president in February after unsuccessfully backing Nkosazana Dlamini-Zuma to succeed him as head of the party in December. Mahumapelo and Magashule had also supported Dlamini-Zuma.

There are still people in the ANC who want to challenge the outcome of the party’s elective conference, including going to court, Magashule said.