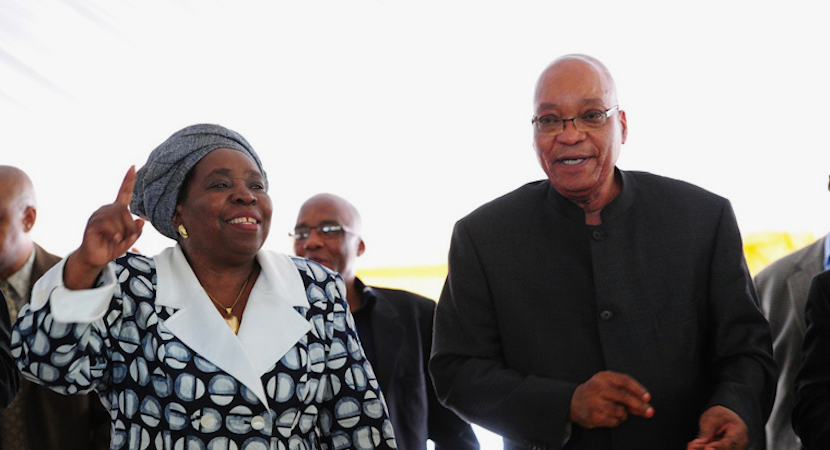 In the closest thing you can get to endorsing your successor without risking party censure similar to that of top political and labour groupings, President Jacob Zuma told millions of Nguni-speaking radio listeners this week that his ex-wife is a great fit for the job. In a Mugabesque move which differs only in that he’s more accountable to his party and was elaborating to a questioner, President Zuma, pointed to her struggle history before she met him and (in predictable patriarchal fashion), said his family had ‘no problem’ should the ANC elect her. Regardless of hollow party statements that both Cosatu (openly endorsing Deputy President Cyril Ramaphosa) and the ANC Women’s league (openly endorsing Nkosazana Dlamini-Zuma, plus six other women candidates), should desist and leave endorsements up to party branches, the race is now solidly on. One can only speculate on the current status of Zuma’s relationship with his ex-wife. Her reticent body language in a recent news pic where he jovially embraces her on some public platform wasn’t quite synonymous with a similar historical picture of political aspirants. I’m thinking here of a seated Thabo Mbeki’s startled pull-away on the leadership podium when Winnie Mandela kissed him on the cheek (from behind) at a party elective conference many years ago. That confirmed for many their enmity. No kisses or shocked withdrawal here. Just what could even be interpreted as a culturally-correct demurral by Nkosazana. Regardless of their personal relationship, their political one is vital to Msholozi’s future freedom and security. A successor who has his back can keep the hyena’s baying for blood at bay. And an incumbent with huge sway among his own powerfully-placed cabal is worth Nkosazana’s trouble to keep sweet. Check out Hillary and Bill over the pond… – Chris Bateman

“If the ANC says we think that we can give you this responsibility, that is not a concern at all so far as the Zuma family is concerned,” Zuma said during an interview broadcast on three SABC radio stations.

He was responding to a listener’s question if he was worried about the ANC presidency being passed from one Zuma to another.

She is considered one of the front runners to replace her ex-husband when the governing party holds its elective conference in December.

She would likely run against ANC deputy president Cyril Ramaphosa, who had received endorsement from tripartite alliance member Cosatu. The trade union federation previously successfully lobbied for Zuma to become ANC president at the party’s Polokwane and Mangaung conferences in 2007 and 2012.

“She has held a number of positions. She has been a minister. There is no question at all,” Zuma said, referring to her abilities as a leader.

The banality of SA politics is the contest between Cyril Ramaphosa and Nkosazana Dlamini-Zuma. Two people most unqualified to lead anything.

She was an anti-apartheid struggle leader before they got married. The couple had four children and divorced in 1998.

“Nkosazana has been struggling even before she was a Zuma.  She was struggling from her student days and has grown in the struggle,” Zuma said.

Dlamini-Zuma was involved in protest politics during her student days at the University of Zululand, now University of KwaZulu-Natal.

She has served as minister of foreign affairs and health under former presidents Nelson Mandela and Thabo Mbeki. She was home affairs minister in Zuma’s first administration, before being elected African Union commission chair in July 2012.

Just to be clear, I don't back any of Ramaphosa or Dlamini-Zuma. The former due to Marikana, the latter due to proximity to Jacob.

She is expected to return to South Africa when the continental body elects a new commission chair at the end of January.

Speaking on a Gauteng radio station on Wednesday, Zuma said the ANC had long been ready for a woman president.