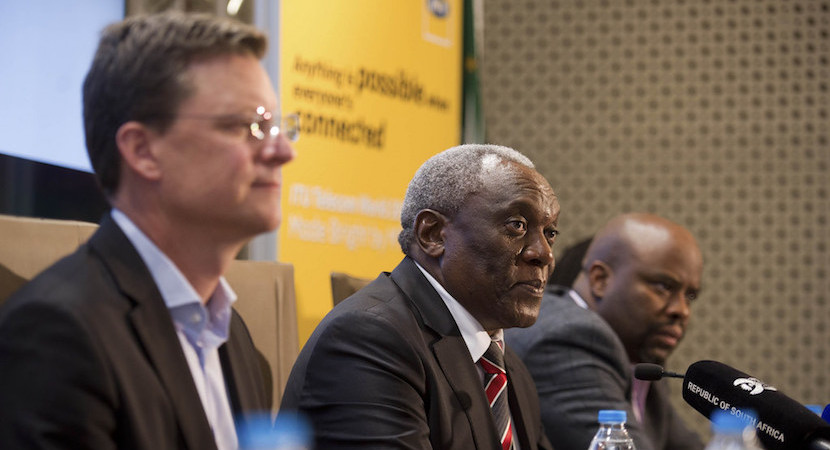 JOHANNESBURG — This mini-reshuffle was to be expected. President Ramaphosa was never going to take big risks and make the major cuts he probably wants in his Cabinet – he’ll save that for next year. So, in many ways, this is a holding Cabinet. But with the telecoms and comms departments amalgamated back into a single unit, it’s a sign of things to come in 2019… – Gareth van Zyl

(Bloomberg) – South African President Cyril Ramaphosa named Siyabonga Cwele as his home affairs minister, replacing Malusi Gigaba, who quit after he was found to have lied under oath in court.

Stella Ndabeni, who served as deputy to Cwele at the Telecommunications Ministry, will assume the post as minister, and also assume responsibility for the communications portfolio, Ramaphosa told reporters in Pretoria, the capital, on Thursday. Nomvula Mokonyane, who was communications minister, will become environmental affairs minister in place of Edna Molewa, who died in September, he said.

Ramaphosa, 66, took power in February when Jacob Zuma resigned and replaced several of his predecessor’s closest allies, some of whom were implicated in graft. While Ramaphosa didn’t cut any ministerial positions, he’s indicated the size of the cabinet will be trimmed after next year’s elections.

Today, I am announcing a number of changes to the National Executive, the Cabinet.

These changes are occasioned by the untimely passing of Minister Edna Molewa and the resignation of Minister Malusi Gigaba.

In making these changes, I remain determined that the Cabinet of our nation should have an appropriate mix of experience and capability as well as gender and generational mix that it should have members who are committed to serve and to serve selflessly.

I am mindful of the need to have a resolute and stable Cabinet that is able to effectively lead the growth, renewal and transformation of our economy and our society.

I have decided to make the following appointments:

This move is going to ensure that we have better alignment and coordination on matters that are critical to the future of our economy in the context of the Fourth Industrial Revolution.

The decision to merge the two ministries is in line with the work that we have undertaken in line with the announcement which I made during the State of the Nation Address that we are going to look at realigning government.

In anticipation of the 6th democratic administration we will have completed this work and when we have completed it and after which we will make a more comprehensive announcement on how we would have realigned government.

The merging of Communications and of Telecommunications and Postal Services is the first wave but it is also to help with the realignment process which we need right now in order to put into effect the transformation that we are effecting with regards to economic management.

I also wish to announce the resignation from the National Executive of the Deputy Minister of Energy, Ms Thembi Majola, with effect from 1 January 2019 to attend to family commitments.

I wish the newly-appointed Ministers well in undertaking the great responsibility they have to the people of South Africa, and extend my gratitude to all those who have served as Ministers as well as Deputy Minister Majola for their contribution to the country.