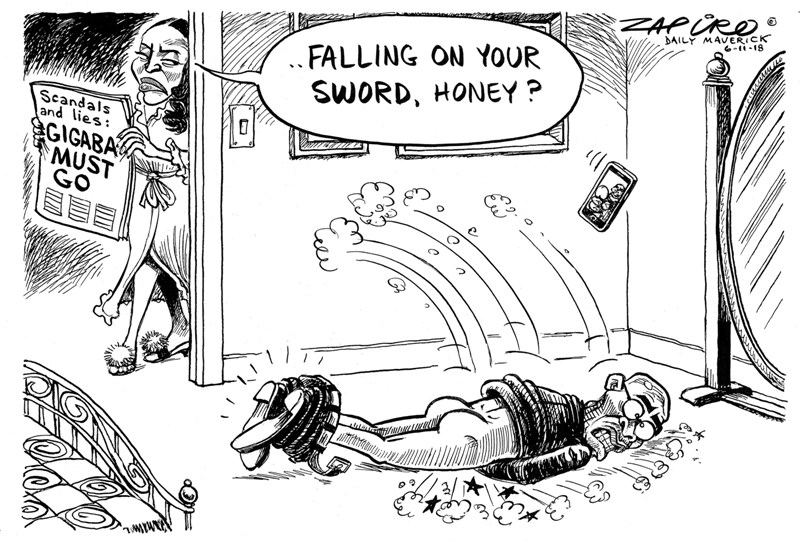 JOHANNESBURG — The Zuptoid walls are slowing collapsing as another of the key points-men announced his resignation from cabinet on Tuesday. The axe was hanging over Home Affairs’ minister Malusi Gigaba’s head following the court finding that he’d lied under oath, and with President Cyril Ramaphosa clamping down on graft, he was left with little room to wiggle. Unlike former SARS commissioner Tom Moyane who was recently fired, and while is looking to contest that decision, Gigaba has taken the easier route. The Ramaphosa arm in government is slowly gaining control. – Stuart Lowman

(Bloomberg) – South African Home Affairs Minister Malusi Gigaba succumbed to pressure to quit after a court found he’d lied under oath and a compromising video of him was circulated on social media.

Gigaba’s exit Tuesday bolsters President Cyril Ramaphosa’s assertion that he’s committed to clamping down on graft and reversing the mismanagement that characterised his predecessor Jacob Zuma’s almost nine-year rule. Gigaba served as Zuma’s public enterprises minister and finance minister, and a group of leading academics alleged that he helped facilitate the looting of state funds by businessmen allied to the former president.

The resignation marks a swift fall from grace for one of the rising stars of South African politics, taking him from a top cabinet post less than a year ago to being branded a liar and apologising for a leaked sex tape. It removes from government another of Zuma’s favourites and allows Ramaphosa to name his own minister to a key position as the ruling African National Congress seeks to bolster its reputation before elections next year.

“This is extremely good news,” said Sethulego Matebesi, a political analyst at the University of the Free State in the central town of Bloemfontein. “You do not antagonize people who win you the elections. At the end of the day he resigned out of his own accord. The president comes out with his hands clean.”

Gigaba, a 47-year-old former head of the ANC’s youth wing, denies any wrongdoing. He did, however, apologise for the video that he says was hacked from his phone and was only meant for his and his wife’s viewing.

Ramaphosa won control of the ANC in December and took office two months later after the party forced Zuma to quit. Ramaphosa initially retained Gigaba and several other Zuma appointees in the cabinet in a bid to help heal divisions within the ANC caused by the leadership race.

“The president has accepted the minister’s resignation,” Ramaphosa’s office said in a statement. Gigaba took the decision “to relieve the president from undue pressure,” it said.