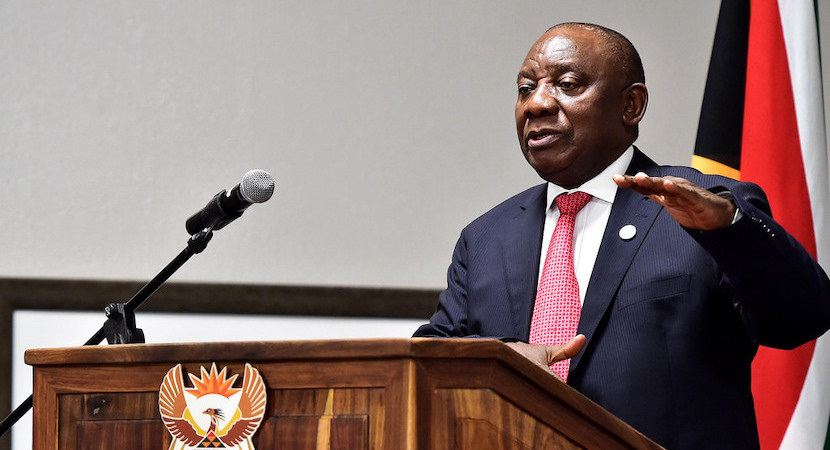 CAPE TOWN — President Cyril Ramaphosa cannot possibly continue to be the only game in town. Not if the ANC seriously wants to continue reform and reclaim its proud struggle history and a return to the basic tenets of the Freedom Charter. This story is a powerful reminder of the constraints he faces in breathing life back into an inert economy while keeping the party conservatives – and yes, the very Zuptoids he’s helping bring to book, on board. He could probably get away with holding onto some of the investor-shaky ANC policies, but he can’t afford to alienate the enemy within by challenging every one. Not now. The question is, given the organisation’s ability to recall him, will an increased ANC majority really accelerate ongoing reform? Or will he prove to have been a timely and useful instrument? Zuma and his Zuptoids can also play the long game. – Chris Bateman

(Bloomberg) – Politics is tying the hands of South African President Cyril Ramaphosa as he weighs policy trade-offs needed to rejuvenate a moribund economy.

The labour union leader-turned businessman took office a year ago, shortly after winning control of the ruling African National Congress by a razor-thin margin. With a large party faction remaining loosely aligned to his predecessor Jacob Zuma, his political control remains tenuous. He’s due to announce his policy program and priorities in his second state-of-the-nation address on Thursday.

While Ramaphosa’s ascent to power initially boosted confidence and the rand after repeated policy missteps during the almost nine years Zuma was in charge, indexes tracking sentiment have retreated as reforms fell short of businesses’ expectations. The government’s decision to entertain the option of seizing land without compensation has been particularly damaging, even though it could help the ANC win over voters who may have backed the populist Economic Freedom Fighters in May elections.

“The African National Congress is a brake on Ramaphosa doing what needs to be done,” because he doesn’t have a clear backing from the party’s decision-making structures, Ivor Sarakinsky, a senior lecturer at Johannesburg’s Wits School of Governance, said by phone. “He’ll have to navigate his way around on an issue-by-issue basis and carefully.”

Ramaphosa can point to some successes – he’s replaced the boards and top managers of state companies that have been dogged by corruption allegations, finalised new rules to provide certainty to the mining industry and convinced several local and international companies to back his drive to secure $100bn in new investment.

Yet major challenges remain, including trimming a bloated cabinet, resolving the land seizure debate without unduly spooking investors, taking unpopular steps to fix Eskom Holdings SOC Ltd., the state power utility which is on the verge of collapse, and following through on the ANC’s resolution to implement a national health insurance scheme.

The president said Tuesday the government will announce a plan for Eskom within days, pledged to ensure that land reform will be done in a responsible manner and undertaken to reduce the number of cabinet ministers after the vote. Fixing the power utility will be a test for Ramaphosa with the Congress of South African Trade Unions, a key alliance partner for ANC, having said it would oppose a move to split the company into separate units.

Eskom expects a loss of around R20bn ($1.5bn) for the year through March and has about R419bn of debt.

His televised speech is due to begin at 7pm in Cape Town.

Ramaphosa’s ability to act decisively would be much enhanced should the ANC perform well in the elections, according to George Herman, chief investment officer at Citadel Investment Services. The party has won every election outright since the first multiracial one in 1994.

“Where we stand, on a precarious level of economic growth, with a slowdown of economic growth in the global economy, we need a dedicated, committed, focused government to lead us through this phase,” Herman said. “We need Mr. Ramaphosa to have a strong hand.”

Ramaphosa will need to implement measures that require “some pain” up front, with the benefits only materialising down the line, according to Sanisha Packirisamy, an economist at Momentum Investments.

If he secures a strong mandate from the electorate, he can start implementing reforms reasonably soon “even though he might not be there in the presidency to bear the fruits once they actually starts to manifest in higher growth,” she said.