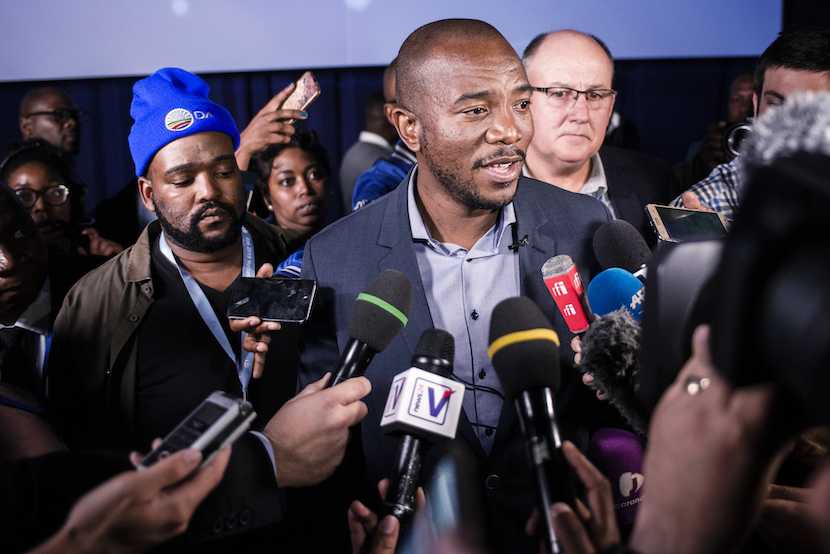 PRETORIA — The Democratic Alliance was hoping to increase its support from the 22% they managed in 2014, but all indications are that they are not going to be able to replicate their previous national performance. The party’s leader Mmusi Maimane said at the IEC centre that he is proud that his party managed to retain the centre ground. There are rumours that his leadership may be challenged due to the lack in growth in support for the party. – Linda van Tilburg

I’m grateful and I want to thank the people of this country. I want to especially thank all South Africans who voted for the DA. I am really, really proud of all of you. I am proud of the vision that you are standing for because exactly four years ago, I was elected leader of the DA and I’m proud of the mission we’ve embarked on. It’s a mission to build one South Africa for all. It was always a mission to say we will grow into communities we’ve never grown before and hold the centre of politics where Black, Indian, Coloured and White people can work together to realise the dreams of a prosperous nation. So, along with that, I’m proud that we’ve maintained that mandate. We’ve gone out to build in a universe where so many in the world will hark back to racial nationalism and a form of populism, which stayed the course.

It’s an historic mission that this party has always been engaged with and it’s one that I am proud to continue and will continue. We are going to be taking this party forward to grow in more communities and grow in more areas because ultimately, it’s about holding the centre. It’s about making sure that citizens can work together. More than anything, I know that when we stepped into this election, we promised that in this place, South Africans need to be brave. They need to know that they’re standing before a liberation movement and one day, this country will enter into a post-liberation movement era. That is what this project is about. It’s about breaking the back of that so that one day, we can live with a party that contests against racial nationalism at its best. And therefore, what I think this election has been about is the realignment of politics.

It’s about bringing together a new centre ground that the DA will occupy and will continue to… There’s been a rise in nationalism and parties that stand for that (maybe) in some ways, have been rewarded but it doesn’t mean the project is wrong. It means that you have to pursue it, regardless of what happens. And what I’m looking forward to in the next while, is building with a team of South Africans that are diverse. Where votes have been lost, we’re going to go back and work hard to get movers…gain more support because we’re the only alternative in this country that’s holding the centre together. I want to say that the thing I celebrate about these election results is the fact that we demonstrated that we’re a diverse race; that it doesn’t matter where we’ve come from.

I just got the latest projections that say that in fact, even in a place like Soweto where the DA was accustomed to only getting 5% of votes there – it’s getting 13-14% – details that show that it’s growing. To me, that tells me that we can grow in Soweto as we can in Sandton. That is a powerful mission. In a world where people are saying, “No. I want to stick to my own”, people are standing together in this election and I’m grateful for that. I want to say, “Yes, at times citizens will become worried”. As I said in our closing rally, “Yes, it is tough for South Africans. It is a tough time. The economy is in a terrible state. We’re growing at 0.8%. It’s why our mission of putting a job in every household has never been more important and that’s why I’m grateful that we will retain the Western Cape and here in Gauteng, we are challenging.

As you can see, no-one can guarantee that the ANC will retain it’s outright majority and that’s because we must never fall prey to the lie that says that ‘in fact, only people who look like you, worship the same God as you, or speak the same language as you are the only ones who can protect your rights’. The facts are: people can work together. Nobody…no leader enters a race looking for a loss. No person goes into a tournament or a competition wanting to… You go and you win and you go, and you work hard. I’m proud of what the DA has done. We could have succumbed to populism narratives. We could have succumbed to forgetting our values but we’ve stuck to the course and we’ve gone full-tilt. Even though we’ve lost some votes, I can guarantee you that we held the centre.

DA’s James Self tells 702 that as the party, they have to go back to the drawing board. He admits that some of DA’s supporters might have voted for VF Plus and the new political party, Good. He further states that at this point, he can’t tell whether Maimane will stay or go.

As a party. We, as a party, will go back and work even harder to regain those votes and I will regain the project going forward because it is the project I’ve always been engaged with. It is a project that I will go and speak to everybody to say ‘let’s continue this mission’. We have shown that when we govern, life does get better. That’s why we can retain. We’ve shown that even here in Gauteng. We are competing here for the votes. I’m proud of what this party’s doing and I want to say – humbly so – that even for South Africans who say they’ll vote one way: I can promise you now. We’re going to work hard to get those votes. We’re going to work hard to grow from here. This is a party of all South Africans. Change is not always easy. It is hard but you must pursue it. You must pursue it with everything that you can and I will continue to do so.

What we begin now, is a project towards 2021. The elections will soon come again. Our record of government, where we’ve shown…is in fact, showing that actually, 15 of the 20 municipalities are DA-run. We will show. We will add to the lists when we’re at Johannesburg and Tshwane. I’m actually quite excited that soon, very soon, we’re going back to Nelson Mandela Bay where ultimately, vacancies have been declared. We’re going to contest them. Looking at the election results, we’re showing that in the wards we’re going to contest, that we’ve got a significant amount of votes there. We will go back and take those seats and we will contest for that municipality in the near future so that we can continue to govern Nelson Mandela Bay and show the people.

That’s why I’m glad to have Athol Trollip here – the chairperson of the party – and James Selfe who is the federal chairperson and Solly Malati who is our national spokesperson. They’re our fellow South Africans. This is about this contest in South Africa. One is where you get nationalism on one side and one where you get a party like the DA that stands for all South Africans. That is the race. And whilst this election has shown that we are realigning politics, it shows that we have a long journey. It may not have happened this time, but trust me. Give us 21/24. We will demonstrate to the people of this country that we can hold all South Africans together, make them prosper, and bring change to our nation, which our nation so desperately needs. Thank you.