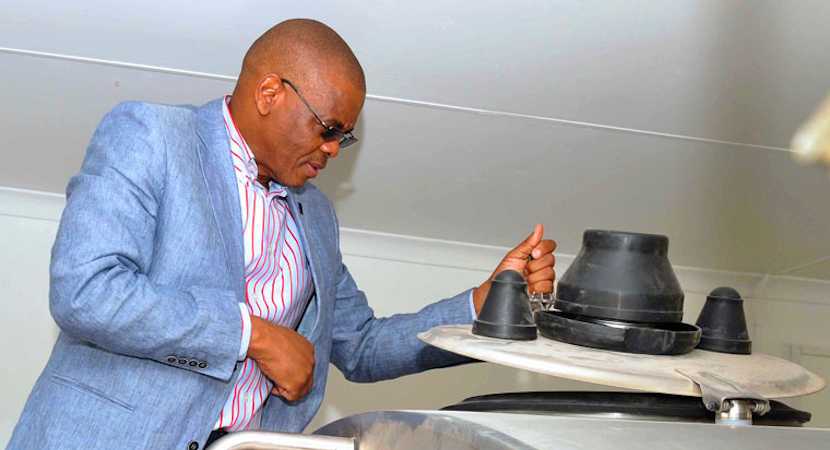 Many South Africans will be breathing a sigh of relief that ANC secretary-general Ace Magashule has landed in hot water with his involvement in a rival political party. He has been an international embarrassment, featuring as a star performer in a cast of corrupt politicians in a spread on South Africa in The New York Times (See: They Eat Money’: How Mandela’s Political Heirs Grow Rich Off Corruption). Magashule has survived widespread claims that he is deeply dishonest, allegedly accepting huge cash sums from the graft masters, the Gupta family, and probably even dangerous, to maintain his position as one of the most powerful political figures in the country. Until now. It looks like the ANC has grounds to discipline, and hopefully, oust Magashule for secretly supporting a new party to rival the liberation movement. The Daily Maverick examines the latest developments on Magashule, in an article republished on BizNews with kind permission. – Jackie Cameron

Heat rises for Magashule, the ANC’s top liability, and master survivor (so far)

When News24 broke the news on the morning of Tuesday 11 June 2019 that the ANC is to investigate Ace Magashule over his alleged involvement in the formation of the African Transformation Movement (ATM) party, civil society group Outa tweeted a question probably foremost on many minds:

“But more importantly, when will [the ANC] probe Ace Magashule for his role in the massive looting in the Free State?”

If Magashule was indeed found to have helped launch the ATM, and his career within the ANC ended as a consequence, it would be a result analogous to Al Capone being taken down for tax evasion. The allegations against Magashule have been simmering/boiling for well over a decade and now amount to a rap sheet which spells out a massive political liability for the ANC and the administration of President Cyril Ramaphosa.

However skilled Magashule’s political manoeuvring so far, and however ferocious the fightback against Ramaphosa’s so-called New Dawn, there is little doubt that the case against Ace builds heat daily.

As reported by News24, and subsequently confirmed by ANC Women’s League secretary-general Meokgo Matuba in an eNCA interview, Magashule is to be the subject of an internal party probe. The ANC did not respond to Daily Maverick requests for comment on the matter on Tuesday.

Magashule may not be the only individual under scrutiny and it’s unclear exactly what charges will be investigated, but it seems that the aid allegedly given by Magashule to the founders of the ATM will be high on the list. This resolution reportedly came out of the ANC’s National Working Committee (NWC) after being raised by members of the National Executive Committee (NEC).

The investigation is reported to be led by a panel chaired by former president Kgalema Motlanthe. Even if the probe confines itself to Magashule-related matters that are internal to the ANC, there are a number of other lines of inquiry which could potentially be on the agenda.

For one, before the elections Magashule was accused of meddling with the lists submitted to the Electoral Body containing the names of candidates who would serve in the National Assembly and the provincial legislatures. Though Magashule appeared to have stifled the rumours at the time, allegations to this effect continue to swirl in some provinces (including the chaotic ANC Western Cape). City Press reported in early June that an investigation into the electoral list manipulation was still being called for by some in the NEC.

A second potential avenue of inquiry would be the still-mysterious meeting reported on by the Sunday Times in September 2018, which saw Magashule gather with former president Jacob Zuma and known Zuma allies, allegedly to plot the ousting of President Cyril Ramaphosa. Magashule eventually admitted that the meeting took place, but denied that any plotting was afoot.

For those hoping that this investigation may spell the end of Magashule’s tenure as secretary-general, however, there are some reasons to be doubtful.

One is the dismal track record of the ANC’s internal processes in holding members to account, as witnessed by the recent – and apparently ineffective – proceedings of the party’s integrity commission.

Another is the spin already being put on the investigation as a move welcomed by Magashule as a chance to exonerate himself. The ANC Women’s League’s Matuba described the probe to eNCA as motivated by the desire not to “rely on allegations”, but rather to “let comrades have a chance to clear their name”.

“[Duarte] is smiling,” wrote Yengeni. “You will be very happy to know that we had a very constructive engagement at the NWC in Luthuli House today… The ANC lives… The ANC leads!”

Magashule’s name has cropped up before the Zondo Commission in various damning contexts over the last months. Perhaps most dramatic was the April testimony of former Free State economic development MEC Mxolisi Dukwana, who claimed to the commission that Magashule had admitted in his presence to receiving R1m monthly payments from Tony Gupta.

More recently, the Zondo Commission has also been supplied with information by the DA relating to a scheme allegedly orchestrated by Magashule to exploit rental agreements for government buildings to benefit his cronies.

“I want to go to the commission, if I am so implicated. I want to go because if one goes there, one can relay many other stories.”

The ANC secretary-general has yet to make good on this promise/threat, however.

If the Zondo Commission’s final report was to implicate Magashule in severe misconduct, however, it would (presumably) be incumbent on Ramaphosa to take action to protect the narrative of the New Dawn.

While the ANC originally released a scathing statement denouncing the book’s credibility, reports had it that the party’s top brass subsequently agreed that Magashule should handle the issue alone.

Despite Magashule’s initial threats of legal action, Myburgh confirms that no summons has been served to date on him or his publisher.

Former president Thabo Mbeki, in an interview with the Sunday Times before the May elections, urged the ANC’s NEC to take the allegations against Magashule contained in the book seriously.

Myburgh says, meanwhile, that there are indications that investigations from the criminal justice sector are “heaping up”. He has been approached by both the Hawks and the National Prosecuting Authority on what Myburgh describes as “broad fact-finding missions”.

Another Myburgh investigation, into a R150m RDP housing scam set up to benefit Magashule’s daughter, is also the subject of a Hawks probe.

Though Magashule has managed to avoid criminal prosecution to date, Myburgh’s book suggests that one reason is that the former Free State premier was allegedly able to use his provincial sway to meddle in investigations and receive tip-offs of raids ahead of time. Such interference may be harder to achieve now that Magashule has left his provincial power-base.

As ever, however, much will come down to the appetite of the Hawks and the NPA – led by new boss Shamila Batohi – to pursue prosecutions. The DA has previously complained that of all the criminal complaints it has laid against Magashule over the years, not one has progressed to the point of a dossier being referred to the head of the NPA to make a decision to prosecute.

Casefile 4: The Public Protector report into the tender for a Free State government website

The Public Protector is apparently still busy – after at least four years – with a report on the R140m tender for a Free State government website awarded during Magashule’s tenure. The DA laid the complaint during the Madonsela era and there’s been no sign of the report yet, despite Busisiwe Mkhwebane’s assurances that it was close to completion in September 2018.

Given Mkhwebane’s half-hearted report into the Magashule-backed Vrede Dairy project – a report subsequently ruled invalid by the Gauteng High Court – there is, however, little reason to believe that the current Public Protector would produce a report harming Magashule’s political prospects. DM