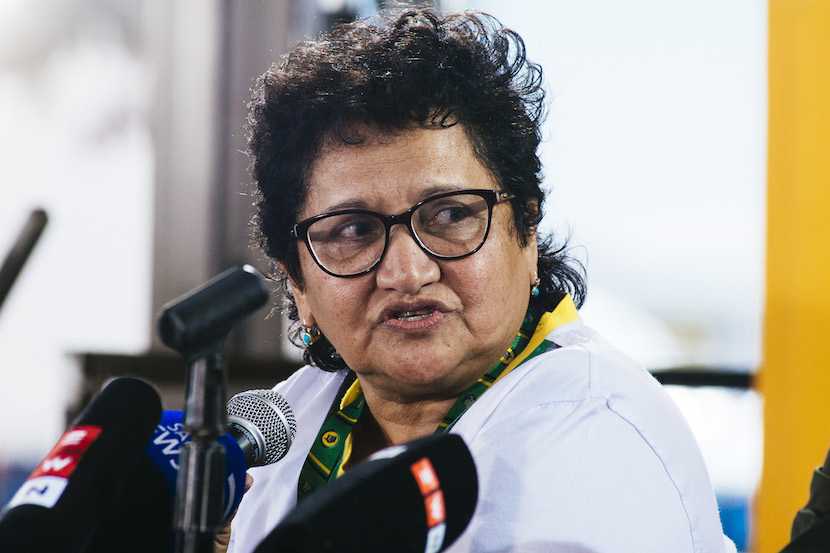 PRETORIA — The Deputy Secretary-General of the ANC Jessie Duarte says she has applied to the Zondo Commission to testify about allegations made about her on state capture. Biznews gave her the right to reply to the various allegations against her and her fractious relationship with the media. She also commented on the halfway mark of the election results saying that she was happy with the ANC’s performance, especially the areas of the Bo-Kaap they have taken from the Democratic Alliance. – Linda van Tilburg

With me I’ve got the Deputy Secretary General of the ANC, Jessie Duarte. Jessie you happy with things, how things are going for the ANC?

You know it’s exactly were we thought we would be at this point of the elections, with 45% of the vote having been counted. We’re not unhappy, we’re leading and that’s a good space to be in, we’re leading in all the provinces with the exception of the Western Cape. We also anticipated that in the Western Cape the battle would be quite difficult for us and we put quite a lot of energy into the Western Cape vote. For me the excitement was winning a ward in the Bo Kaap, which we’ve never in our history of South Africa’s election ever won and it sounds like 1 ward but it’s a significant one, so were we are now is midpoint and by 10 o-clock tonight, that’s when, you know, as they say the proverbial lady will sing, the big metro’s are not out yet. Gauteng’s big metro’s are not finally counted, the base areas for us in the Western Cape are still not counted, we’re waiting for that, that’s Langa, Gugulethu, might give us a few more points, but we’re quite happy with where we are now, you know we’ve already seen that the Northern Cape is in our hands, it’s over 84% counted. Free State is looking good, Eastern Cape is looking fabulous and that’s a stronghold for the ANC. KZN is not fully counted, it’s about 30% counted, but we’re confident that it will come back to the ANC. And so yes we are happy, to answer the question more shortly.

And what about all these complaints about votes and people said they could erase their marks on their fingers. I voted in London and my mark is still there.

Yes, look I think what is important for us is that the matters where raised in the party liaison committee. The IEC heard us, 3 parties made, we also complained, and we feel that the manner in which the IEC is handling it is good, because they’re prepared to actually investigate thoroughly by doing an audit of what is called the VC form. It’s a form that you fill in if you are going to vote in the voting station which is not yours. If anybody is going to cheat it will come out in that investigation. There are 4 critical things to understand about the security of this election, the voting roll, your ID number and also where you vote and the record of your vote electronically on what they call the zip-zip machine. All of those are good markings to have. Then there is the marking on your hand. We’re satisfied that were going along with the agreement we have as political parties that the IEC goes ahead and they investigate and what we were saying all of us is that we didn’t want the outcome to be delayed, we did not want to keep the country in suspense and I think by in large most of us had agreed on that. All of us in fact had agreed on that and that’s a good space to be in.

Our website represents the business community and we think you’ve been having a lot of bad press lately, and I thought, we thought we should give you the chance to reply to that. Do you mind if I ask you how you feel about some bad press who say that you are part of the Zuma era and you might be anti-Ramaphosa?

We’ll you know I support the president of the ANC that’s elected in a conference. I don’t make a distinction between Ramaphosa or Zuma, they’re both presidents of the ANC and I came out of a conference in Nasrec. I wanted a different president, the outcome was different. I support the president that the conference elected and I think that, I can’t ask the media not to be unfair. I have to expect that South Africa’s media will always be unfair towards strong women. We bare a serious brunt of a targeting by the media, many things are said. My attitude has always been to let it go. Sometimes I flair up and I do fight back, but I also recognise that I’m actually not fighting against an institution that accepts a strong woman answering them back, so it’s par for the course, I’m a big girl and I believe that if you are in politics and you are a woman you’ll always be targeted by the male dominated South African press anyway, so I have to live with that, but it does not take away from my work on the ground with the communities that I work with and I’m very happy to be doing that, and that’s a whole different world, and a whole different set of circumstances. Media also puts out stories about corruption, unfairly, so I’ve tried to understand how dots are connected, I don’t see the logic, but as far as I’m concerned I am waiting for the Zondo Commission to call me. I have written to them.

You are going to testify there?

So you expect them to call you soon?

We’ll I’ve written and what normally happens is, they have something called a section 33, and they might feel they are going to call me, I’ve also requested that the really unfortunate statement made by Barbara Hogan at the end of a 350 page document which does not mention me at all, her parting shot is that I am also involved in state capture and I asked if I can cross examine her, she was asked if she would allow me to do so, she has not responded. So I’m simply going to go there and put my case, at the time she was a minister, I wasn’t a Deputy Secretary General and I wasn’t  anywhere near any of the places where she says I could have had influence, so you know, I feel I can answer.

Well thank you. We thought we should give you a right to reply. Thank you Jessie Duarte, Deputy Secretary General of the ANC.

Thank you very much.