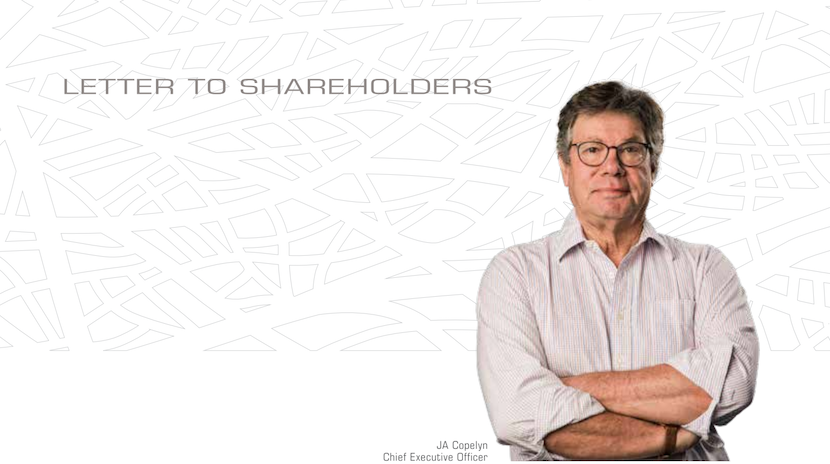 Annual reports tell us everything about a company. They are the single document where boards of directors report to the owners of the company. Given its relevance, it still amazes me how some company leaders outsource the writing of their letters to shareholders, the most important part of any annual report. Because investing in the shares of a company is entrusting savings to those leading the business. And to trust someone, we need to understand what makes them tick. One of the better examples of authenticity you’ll find is the latest shareholder letter by HCI’s chief executive Johnny Copelyn, the key portion of which is republished below. Copelyn was named among those business leaders who donated money, in a personal capacity, to Cyril Ramaphosa’s ANC presidential campaign. After reading what he shared with his shareholders, the HCI faithful may well be asking him at the forthcoming AGM why the company, too, did not make a donation. – Alec Hogg

Last year’s report referenced a number of comments about our hopes that South Africa had turned the corner from the disastrous practices of the Zuma years and that, with hard work, we could get our country back on track towards growth. All the signs that were noted have strengthened over the last twelve months; and it is far clearer now that we are in a phase driving at cleaning out the cobwebs.

There is no question that, if a few of the primary rogues are incarcerated, a lot more confidence will return to the country. Fragile as our upturn may be, it is, at last, starting to happen.

Nevertheless, the level of depravity that our country descended into, remains astounding. It will take many years to bring the country back into any semblance of normality as a result of the wanton theft of public funds; the collapse of confidence in the civil service and the level of lawlessness across the whole country.

Crazy populist pressure on the state to embark on the most inappropriate economic policies, like expropriating land without compensation and hobbling the independence of the Reserve Bank, are unquestionably going to inhibit confidence in the country. This remains the case despite platitudes by the most senior state officials assuring the business community that there will be no expropriations which inhibit growth.

Efforts by factions of the ruling party to undermine their own president, and suggest he is failing to uphold the party line on such policies, will force us all to be more assertive to avoid the retreat of government from doing what has to be done.

Lawlessness across our businesses has meant endless disruptions of our coal business by various community-based groups seeking to force us to employ people chosen by such protesters (even though there are no vacancies to fill); and demands by traditional authorities to pay tributes and benefits on the basis that we are exploiting their “traditional domain”.

The lawlessness has resulted in an endless stream of armed robberies on our buses where passengers are relieved of their possessions at gun point; strikes demanding double digit increases which turn violent; burning of buses and the like.

This is definitely not a place for sissies.

Nevertheless, we absolutely must prevail against these forces. This is a moment where good people need to heed the call to action. We can rebuild what has been destroyed by opportunists and the scars on our backs can make us more determined, rather than naively trusting, as we may once have been.

HCI fully intends to play a role in this resurrection. We are a product of the post-apartheid dispensation in our country. We do not want to pretend otherwise.

It is our special responsibility to demonstrate ourselves as an exemplary BEE entity. And we are that. We have built new businesses rather than just being carried along in other people’s enterprise; we create new jobs, build new hotels, office blocks, shopping centres, warehousing, studios, and convert dilapidated and often vandalised buildings into refurbished inner-city residences.

We look after our businesses and constantly reinvest in them to preserve and modernise them. We refurbish hotels so they look cared for. We have totally renewed and modernised our entire bus feet of over a thousand buses. We have thorough preventative maintenance systems at all production facilities. We have refurbished our casinos and all their facilities; digitised our studios and constantly upgraded our television equipment and the like. We spend millions on rehabilitation work on our mines.

In short, we run our businesses on the basis that they should be here for the long term.

We acquire and build assets honestly. There are no shortcuts and no disreputable or corrupt practices in this regard.

We may not be invited to the most lucrative opportunities, but we certainly look after, and build on, whatever comes our way. Our broad-based ownership through the trade union movement allows dividends of the company to be distributed in a manner that is directly beneficial to tens of thousands of union members.

Likewise, our Foundation has resulted in us picking up a far greater responsibility for social and community issues than any other company our size. These hallmarks have been central in the DNA of the business and to growing it from a very small company to a multi-billion rand operation, employing some 32 000 people.

Hopefully they will continue to be the basis of our investment practices through the country’s recovery and beyond.