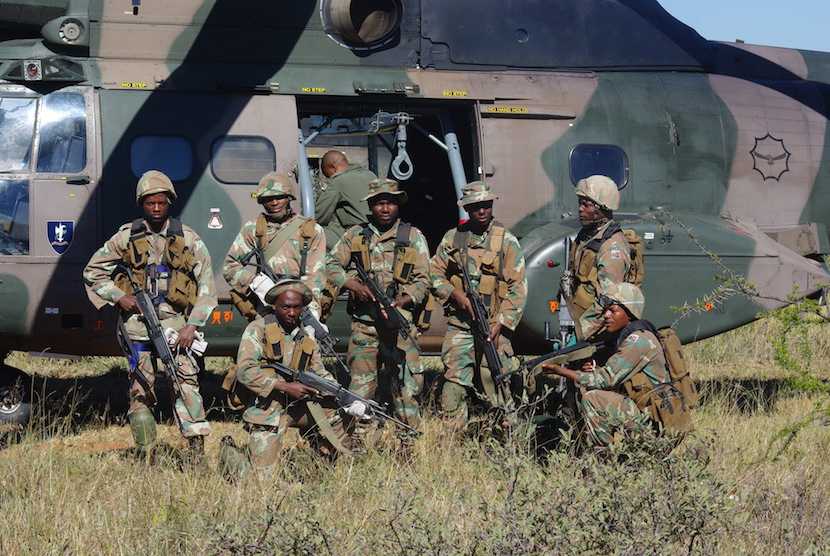 The weekly gang related deaths on the Cape Flats has not shifted noticeably since the deployment of troops in the area. The death toll last week makes for grim reading; there were five people murdered in Delft, four in Gugulethu, three in Manenberg, three in Philippi and Khayelitsha, Langa and Harare reported two murder each; that is 34 deaths in total. It is less than the 47 deaths of the previous weekend, but the Cape Flats community are starting to question whether the army, which they initially welcomed as their saviours, are up to the job. In a series of tweets, Western Cape Premier, Alan Winde said the communities do not feel safer even with the presence of the army. This has shifted the focus to the South African National Defence Force and why they are so ineffective in policing the Cape Flats. It would be easy to assume that the dire state of South Africa’s fiscus is to blame and although it does play a part, prof Lindy Heinecken writes that the army is in a sorry state and she takes a close look at how much money is allocated to salaries; the average age of soldiers and says the structure and design of the defence force needs to be fixed. – Linda van Tilburg

The initial response to the recent deployment of the South African army to areas of Cape Town hit hard by gang violence evoked relief that peace and stability would be restored to the area.

But this has been replaced with a much more nuanced view. Some community leaders claim the deployment has fallen well short of residents’ expectations. The “lock-down operation” needed to target and identify the culprits behind the violence has not occurred.

Despite their limited mandate, the army has just too few soldiers to patrol the ten suburbs that are home to over 1 million people. Less than 300 soldiers are on the streets of the Cape Flats, not the 1320 mentioned by President Cyril Ramaphosa. This figure allows for rotation of troops.

Also, the soldiers will be there for less than the three months, as the deployment is authorised only until 16 September 2019.

We are hearing community members on the ground, who were initially positive about the deployment of the army, starting to question their effectiveness, and if communities do not feel safer, then the SANDF and the police are not fulfilling their role and their mandate.

The result is that people in the affected areas are fast realising that the army is not the solution. This echoes previous cases were soldiers were deployed to crime hot-spots in the country but failed to have a measurable impact.

But, even if more soldiers are requested, the South African National Defence Force simply doesn’t have the capacity to deploy them. This is because it is severely overstretched in terms of both personnel and financial resources.

Of the 37 000 in the army, less than half serve in the 14 infantry battalions. One battalion is tied up in peacekeeping operations and 15 companies are deployed on the borders (far short of the 22 required). Some military analysts claim that the army is 8.5 infantry battalions short (roughly 8500 members) to perform their current tasks.

A great deal has been written on the military’s financial woes. In my analysis the real problem lies with its force structure and design. These have driven up personnel costs to unacceptable levels.

In terms of the defence budget the ideal expenditure ratio is 40 % personnel, 30% operations and 30% capital expenditure. Some claim this is closer to 80:5:15 in reality, leading to the defence force being labelled a welfare, rather than a warfare agency.

The ideal ratios in terms of expenditure differ by country. This is influenced by mission priorities, tasks and service. The army, for example, is more personnel than capital intensive, compared to the navy and air force

It has enough people, but they are just not deployable. There are numerous reasons for this. The approach associated with the contract-based “flexible service system” of short, medium and long term service has not materialised.

With a large number of the deaths this weekend taking place in these hot spots, we have to question whether the promises made to the residents of the Western Cape by the police at the time of the deployment, are being kept. @SAPoliceService

The result is an escalation in personnel expenditure, the retention of people who are no longer fit for their post profile due to age and health, a high ratio of general officers to other ranks, and rank inflation making the armed forces top heavy. Senior ranks are very expensive with extensive salary and pension costs.

Added to this the military has been unable to reduce the number of people in the full-time force through rationalisation and rightsizing, or to rejuvenate its full-time and reserve forces.

Another challenge is the age profile. In 2003 the defence force introduced the military skills development programme to rejuvenate the full-time and reserve forces. The programme was to provide an adequate number of young, fit and healthy personnel for the full time forces; and to serve as a feeder for the Reserve Force. This has not happened due to financial restraints and lack of career planning, leaving the reserves understaffed and underfunded.

The consequence is an ageing force with average troop age of 38 years and the Reserve Force age of around 40 years. The average age of an infantry soldier should be around 23-25 years.

The other factor affecting the capacity of the military is its force design. The South African National Defence Force is structured, funded and
trained for its primary, not secondary tasks. Using the military continuously in internal secondary roles has stretched it beyond capacity and contributed to its downward spiral of decline.

There is a clear “disconnect between the defence mandate, government expectation and resource allocation”. If the government is serious about providing security for its citizens, it is crucial to fix the structure and design of the force, which have eroded its capacity to function optimally. Failure to do so will have dire implications for the defence force’s ability to carry out its mandate – to protect the country and its citizens as required by the Constitution.