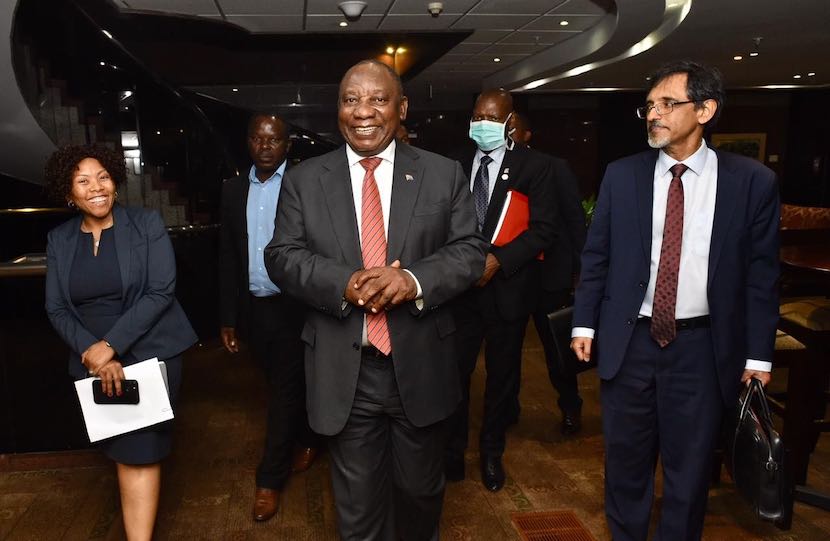 Watching Cyril Ramaphosa announcing SA’s total lockdown filled me with a sense of pride, wrote BizNews editor Alec Hogg, in his Daily Insider newsletter, of the president’s bold steps to lockdown the country in the face of the coronavirus pandemic. Many share the view that President Ramaphosa stands out as a leader at a time when much of the planet has been ordered to stay indoors to avoid the silent, stealthy, deadly coronavirus. BizNews community member Victor Modise immediately wrote to Hogg to signal his approval of the president’s decision: “Without any reservations, I completely agree with your analysis of our President’s performance during this difficult time in our country.” Modise referred to a Martin Luther King quote that the ultimate measure of a man is not where he stands in moments of comfort and convenience, but where he stands at times of challenge and controversy. US President Donald Trump and other world leaders “have a lot to learn from South Africa”, Modise added. In a similar vein, respected political columnist and legal expert Richard Calland examines how Ramaphosa stacks up in this time of extreme crisis, finding that early on he outshone Trump and British Prime Minister Boris Johnson. – Jackie Cameron

All world leaders face mega COVID-19 crises: how Ramaphosa is stacking up

The Covid-19 pandemic is an extreme crisis that puts government under severe pressure. It puts the political judgement of the president or prime minister under the most intense spotlight. Not since the height of the Cold War have the stakes been higher.

The constitutional and governance dilemmas are acute, with especially thorny dilemmas that concern the limitation of civil liberties. The judgement of political leaders will be crucial in determining how well society will cope with the pandemic and how quickly it will recover – with myriad profound social, economic, cultural and constitutional implications, and life and death consequences.

Here are six decision-making challenges that will tax the mettle of every political leader while testing constitutional and other legal boundaries in unprecedented ways.

Timing I: the initial response

The first question of timing is of a “first responder” type. Composure and clear-headedness is required in the initial diagnosis. How serious a threat is it? How imminent? How quickly will it escalate? What is the first priority action?

And even more fundamentally, at what point should the government curb freedom in order to contain the spread of the coronavirus and mitigate its impact? Already, we have seen a range of responses globally – from countries that apparently reacted too late, to those who acted relatively early.

At this stage, trust is the primary commodity. Citizens need to be convinced that their government is providing the right guidance and that the correct precautions are being put in place, proportional to the threat.

At this point, therefore, the optics can matter as much as the underlying policy substance.

It would seem that, for example, neither US President Donald Trump nor British Prime Minister Boris Johnson were either sufficiently trusted nor sufficiently clear in the early phase of their responses. Their attempts to encourage self-regulation and voluntary compliance with public health measures failed. Both have had to backtrack quickly towards enforced lockdowns.

In contrast, South African President Cyril Ramaphosa has succeeded in conveying a calm and measured leadership persona. In some quarters he’s even been described hyperbolically as having become a “wartime president” . He’s also been ably supported by his health minister, Zweli Mkhize, who is rising to the occasion.

Timing II: When to enforce a “lockdown”?

This is a tricky question, particularly in constitutional democracies where interesting legal considerations come into play. At the very least, a change in the law may be required or special powers invoked.

Again, Ramaphosa was decisive in declaring a national disaster on Sunday 15 March, as a part of his initial response package.

At the time, with only 51 known cases of coronavirus infection in South Africa, it might have been regarded by some as an over-reaction. Yet, by invoking the provisions of the Disaster Management Act the government extended its authority so that it can by regulation impose restrictions on, for example, the number of people who may gather in any one place.

Importantly, the regulations issued in terms of the declaration must comply with the provisions of the Bill of Rights. A court can declare specific regulations unconstitutional if they impose limitations on rights in a way not justified by the limitation clause.

If the initial set of rules and the call for self-restraint fails to prompt a substantial change in social behaviour sufficient to slow down the rate of increase in infections and serious illness so as to ensure that healthcare systems are not overwhelmed – the so-called “flatten the curve” strategy – the government can ramp up the restrictions and impose a “lockdown”.

Again there is a crucial judgement to be exercised: how long to wait between the two? Since Ramaphosa’s Sunday 15 March address to the nation, the number of known cases of infection has increased to over 700. The country has entered the exponential growth phase, with a sharply rising curve that falls somewhere close to the middle of the pack.

The biggest judgement of all: weighing up competing needs

Clearly, it is not too soon to be imposing more drastic restrictions on movement. In South Africa’s case the greatest concern is that the virus will be transmitted to densely populated working class communities mainly through congested trains and taxis.

Hence, the need to close down the economy for all but “essential” operations and business.

And herein lies the most difficult dilemma of all: how to weigh up competing needs for public health and human security in the face of the coronavirus threat on the one hand, with the harm that will be done to the economy and to people’s livelihoods by locking down?

In the past days the contours of a fascinating but delicate new public discourse have begun to emerge. This is the libertarian concern for freedom of the market, which has found resonance in other quarters.

Political leaders stand between the horns of this dilemma. How much weight should they attach to longer-term but potentially more devastating consequences caused by an economic depression in the face of an immediate short-term threat to public health? Are they even willing to entertain this delicate intra-generational debate, which contains deep ethical as well as complex policy considerations? Which leader would be willing to adopt a policy prescription that increased risk and the number of deaths from COVID-19 in the short term in exchange for a less severe economic downturn in the longer-term?

Who should political leaders listen to?

The emerging debate about short term public health versus longer-term economic welfare raises the further question of who political leaders should listen to. Given the heavy political judgements required, can they afford to listen only to the medical experts? Or can they afford not to do so?

This, too, is a question of political judgement. Who else to bring into the decision-making war-room to help prevent groupthink? As the iconic work of Yale psychologist Irving Janis revealed when comparing the decision-making of President John F Kennedy during two crises – the Bay of Pigs fiasco and the Cuban Missile Crisis – shows, tempting though it might be for a political leader to tighten the circle to his or her most trusted advisers this may well lead to “groupthink” and not carefully tested and rigorous decision-making.

Ramaphosa’s inclination has always been to “show me the evidence”. He has not departed from this approach during the current crisis, making it clear that his decision-making is based on the available science and the guidance of public health experts. As South Africa’s creaking public health system is put under enormous pressure in the coming weeks, and the socio-economic and public order consequences of the economic shutdown bite, so his crisis management skills will be sorely tested.

Which civil liberties to limit and why?

As the pandemic crisis worsens, it is clear that the constraints on “normal” freedom will be need to be increased. But which civil liberties should be constrained, and in which way and on what basis, and for how long, are all difficult questions.

For example, is it justified to suspend data protection rights to enable government to track infected individuals or high risk citizens via their cellphones?

Travel restrictions and other freedom of movement constraints raise their own problems – when, where and on whom should government’s impose such restrictions? As to curbs on freedom of expression, it is clear that fake news can wreak havoc. But should it be criminalised at a time when it is also in the public interest to encourage whistleblowers to speak out from inside government, as well as a free flow of information across society?

Tempting though it may be for governments to close down information flows to contain public reaction and potential panic, transparency is key to good communication and maintaining trust.

This requires political leadership that is open and candid about the challenge and about what it is not able to do as much as what it is doing to tackle the crisis.

When is it necessary to declare a state of emergency?

A worst case scenario includes widespread social unrest and a breakdown in public order as a result of shortages in basic necessities and a sharp increase in poverty and unemployment as a consequence of the economic shutdown.

So, lastly, it may be necessary to take the most drastic and potentially draconian legal decision: the imposition of a state of emergency. For South Africans, this has a particularly painful resonance. Older citizens will recall the mid-1980s when the apartheid government was trying to suppress the liberation movement.

A state of emergency will have the effect of suspending much of the Bill of Rights. The decision-making vortex, already complex and fraught, will have entered a whole new terrain of crisis management which will test every sinew of Ramaphosa’s leadership skills and that will either make him or break him.

South Africa will have become another country.