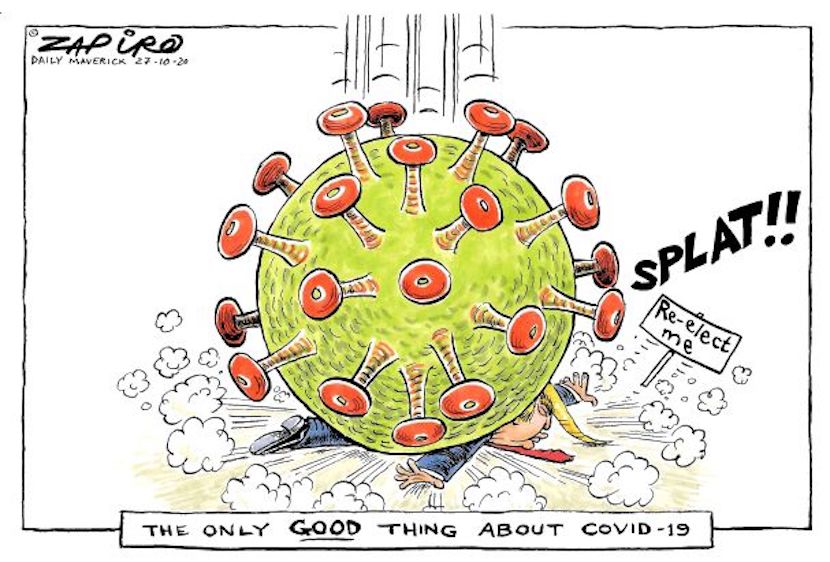 President Donald Trump has repeatedly accused his Democratic opponent Joe Biden of wrongdoings relating to Ukraine and China during his tenure as vice-president. Now, Biden’s youngest son, Hunter, has given Trump the last bit of ammo he needs to potentially bury his rival for good. A New York Post article (published with the help of information provided by Trump supporters) speaks of an alleged email in which an adviser from a Ukrainian energy company, Burisma, thanked Hunter Biden for inviting him to meet his father. Hunter served as a director on Burisma’s board and the argument is that as vice president, Biden shaped American foreign policy in Ukraine to benefit his son. While Biden has maintained that he knew nothing about his son’s business activities in Ukraine, emails were reportedly found on a laptop that Hunter dropped off at a Delaware repair shop in April 2019. Other US media have been unable to verify the authenticity of the emails and the Biden campaign has dismissed the allegations as nothing more than a “smear campaign”. – Claire Badenhorst

At first it emerged that Joe Mosebenzi Biden had no knowledge of his son Hunter’s arrangements and that small boy was just exploiting the family name for his own benefit – in other words, the Gugu Mtshali stage (Kgalema Motlanthe’s wife) – a casual remark like “nothing for mahala” uttered in from of a bunch of slippery undesirables. Immoral and illegal, but by today’s standards, arguably the least damaging.

Then the story mutated, and it became clear that Mosebenzi Biden had to be, at the very least, vaguely conscious of what was happening in his name. This is because no jock called “Hunter” gets cash from a country like the Ukraine, or China, because they happen to be house-trained. It just doesn’t work like that.

So cautiously, we graduate from the Gugu stage to explore Fikile Mbalula territory, jumping on planes belonging to shady cash ’n carry traffickers – all the while becoming more defensive, dismissive. We’re almost at shafting black farmers with “dairy projects” or making pensioners eat Husky, but not quite. Definitely jail time.

Then came the death turn of the story, and the most plausible explanation as to why, a week away from November 3rd, Mosebenzi Biden has quit the trail and gone back to his basement.

Not only did he know, but, according to small boy’s former partner Tony Bobulinski, he was the one pulling the strings, like a suburban crime lord, sitting at home in his nice yellow Ping golf shirt sending projects China’s way and blackmailing Ukraine.

So now he’s no longer Seamus Heaney’s Follower: Joseph Robinette (!?) Biden is in fact the leader, and he just went full Free State Legislature (meaning that the Pierneefs aren’t just missing from the walls – they’ve been eaten, washed down with a 2ℓ bottle of Creme Soda in a lapa).

But why don’t you know this? I’ll do my best to explain.

Suppose you were Glenn Kessler, the Washington Post’s chief pronoun enforcer, or someone like, er, “them” – and you posted a link to the New York Post’s story of the Hunter Biden laptop scandal prefaced with, “there is a case for Joe Biden to answer here” – the following would happen.

First, most of your (already neurotic) colleagues would openly weep in their cubicles and demand permission to bring their cats to work to comfort them (some would even stay up all night examining your social posts from the last decade). Second, you’d lose your verified account status with Twitter (“violation of trust”) – despite the fact that you once shared a vegan brownie with Jack Dorsey at a climate change conference. Third, you would attend a friend’s braai on the weekend – and just as you thought to pinch a load off from a week of hell, crack open your first gluten/alcohol-free beer, someone who used to be called Martin but is now called Jessica confronts you: “F***** fascist bastard, how dare you?”

And that, ladies and gentlemen, explains the evil, co-ordinated suppression of Mosebenzi Biden’s involvement in his son’s schemes. Not because the emails are fake (they are not), not because it is “some Russian disinformation campaign” (it is not) – but because 99% of the media is so corrupt, and 99% of Silicon Valley’s social justice cockwombles are so powerful, that to be caught in the friction of the two rubbing each other up – like two parliamentary catamites at a BBC George Michael remembrance love-in – is fatal.

Happily I’m not British, so I don’t tell voters in America who they should mark their ballots for (of all the annoying habits of the English left – from poor hygiene to cycling in a foul mood – this is the worst). But by the next US election in 2024, I will have qualified to vote.

If you genuinely believe there is a difference between what has unfolded via the information extracted from Hunter Biden’s laptop and traditional ANC oinking and bingeing, I would conclude that you are not well. Then I would encourage you to send your CV to News24 for consideration for the position of editor immediately.