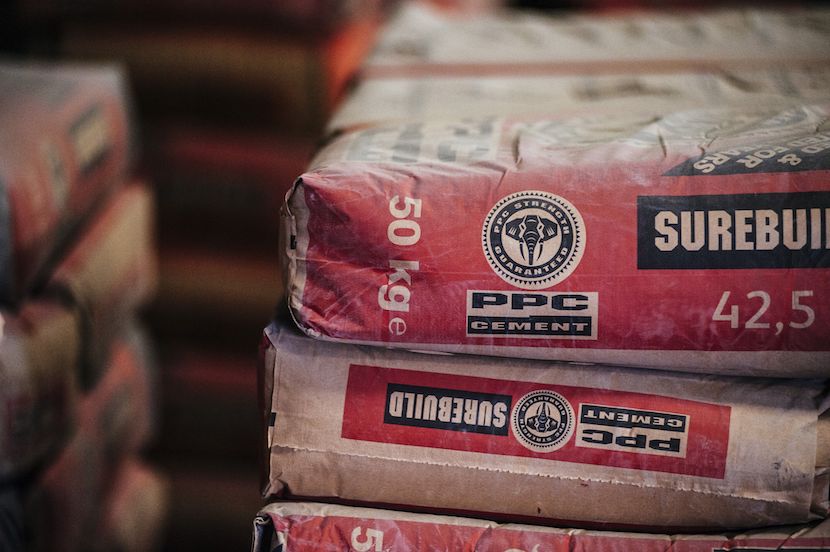 Earlier this week, National Treasury banned the use of imported cement on all government-funded projects – a decision which gave South Africa’s cement companies a significant boost. The ban on imported cement also applies to the raw materials used in production, the ministry said. The share price of local cement giant PPC saw its biggest surge in more than two months after the announcement by Treasury. BizNews community member Greg Stewart sent the below article penned by David Dworcan, the former President of the Master Builders association. Dworcan argues that while this new policy regarding imported cement is a good move, it only touches the surface as things such as supply and sustainability also need to be addressed. – Nadya Swart

The building industry has seen two significant announcements that are certainly welcome, namely the commitment by the SA government to rolling out the 50 strategic integrated projects prioritised by the state over the next three years to the tune of R340 Billion, and the decision by the National Treasury that only locally produced cement is to be used in all state development projects as of November 2021.

While a free market should prevail and cement and other imports do keep local manufacturers competitive, a time has come where government support needs to be in place to protect jobs and livelihoods in the building industry in SA that has been battered over the last few years. In this instance it does make sense that government support local for their infrastructure spend to stimulate and grow our internal economy. This is a good decision that hopefully will come to fruition without delays and the endemic trail of corruption and rent seeking that so often simply pushes the price of these developments up. There are several other factors that are at play within this scenario that should also be considered:

There should be scope built into these projects that not only supports and boosts a few large players in the construction & related industries, but also provides opportunities for SMEs to benefit. In order for this policy to have maximum effect it should also include policy that creates a knock-on effect to smaller suppliers who often create more jobs than larger entities. More jobs mean more demand for technical skills and develop further opportunities in terms of training and skill development in order to meet the increased demand for product and related services and suppliers.

This is good for the whole economy and results not only in less imported goods consumed but also in fewer imported skills and more local employment.

A major obstacle in the past has been that the building industry has experience shortages of cement supply for multiple reasons and these led to the growth of cement imports at landed costs that were highly competitive. It is also likely, that need for cement imports will still remain, as the demand for locally produced cement for major infrastructure development projects is likely to create demand from other sectors of the building trade that currently would only be able to be met by imported product.

As long as there is sustained cement supply in the building industry, the industry will grow. The building industry has experienced many periods where demand has completely outstripped supply and it is now up to local manufacturers to step up to the plate in the most competitive and efficient manner to grow the industry and hopefully expand supply of locally produced cement.

The longer term objective of stabilising the economy will only be achieved by ensuring growth in the big economic sectors such as construction and this will have the knock-on effect of improving investment levels and the rand exchange rate, thereby making imported products less viable in the local market.

As government is addressing much needed policy to stimulate growth in the building industry it would seem like the most opportune time for them to address another area of concern in the building trade – recycling and sustainability. Concrete is not only the most used product in the world by volume, it is also the most recyclable product where as much as 95% can be recycled and reused in construction. The Government has had recycling on its agenda for a long time without any significant progress and is also busy looking at introduction of mandated use of recycled building materials in infrastructure development projects. A policy requirement for recycled building materials to make up a percentage of materials used in the construction of the strategic development projects should be introduced without delay. Not only would this develop a secondary industry to the building trade but ensure a cleaner, healthier landscape with fewer landfills and unsightly building materials illegally dumped across our cities and suburbs.