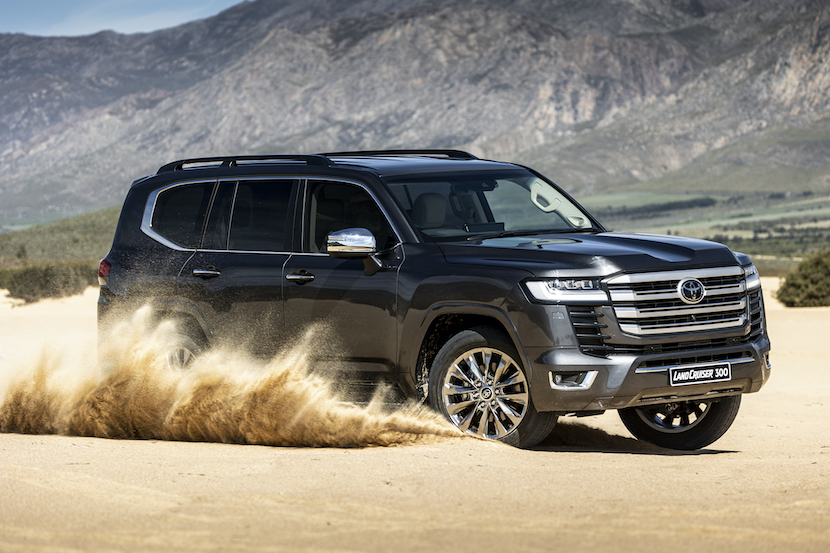 The Land Cruiser 300 is the first all-new Land Cruiser in over a decade. Hence, it is crucial that Toyota get this one right if it is going to see them through the next decade.

In terms of maintenance support all LC 300 models are sold with a nine services/90,000 km service plan with service intervals set at 12-months or 10,000 km (whichever occurs first). A three-year/100,000 km warranty is included across the board. You can also purchase a maintenance and warranty extension. The important note here is that, in theory, the car could be serviced under this plan in 2030 if you do less than 10,000km per year.

As for the warranty, Toyotas have a reputation for rugged reliability, with three years considered a mere run-in period for Land Cruisers of old. It remains to be seen what the new one turns out like in terms of reliability of course but there’s an expectation that comes with the brand.

The engines are new. The diesel motor features a dual-stage turbocharger that uses a bypass valve inside the unit to direct gases to aid spooling at low rpm while still offering full fat at higher r/min, providing increased overall power and a broad, flat torque curve. The results? 225 kW and 700 Nm. The petrol on the other hand ponies up 305 kW and around 650 Nm. That’s quite a lot, more than any previous Land Cruiser.

The GR-S sets itself apart from the VX by offering hardcore off-roader enthusiasts something to titillate their toy box desires. Toyota’s Kinetic Dynamic Suspension System is a locking/unlocking mechanism on the anti-roll bars that gives the GR-S around 30 mm extra clearance over obstacles. Said to reduce body roll and optimise wheel articulation off-road, it’s an additional weapon in the already impressive arsenal of off-road capabilities.

Multi Terrain Select enables you to dial in settings for differing conditions, and on the VX models and above, a camera shows below the car as you drive. I did find this a bit twee to be honest. You still need to get out and walk proper obstacles as you have no depth perception when using the camera system. Although, it does help show you what’s happening underneath the vehicle to avoid any mishaps.

A turn assist function is said to help the Cruiser reduce its not insubstantial turning circle in tight spots. And yes, the thing is massive: 2.6 tons give or take which — if you can believe it — is somewhat lighter than its predecessor, 5m long, 2m wide and 1,95m tall.

That about wraps up the Cruiser on paper but does it match expectations? I think so.

Aesthetically, the Land Cruiser 300 is inoffensive although I found the VX’s chrome grille a little much for my liking. The white “Toyota” emblazoned grille on the GS-R was far prettier. Although, pretty is probably not what the Land Cruiser is aiming at, it’s more functional than that.

Function is not the only thing at play when you open the door. I was almost expecting a phone call from the ‘90s demanding its interior back. None of that though as the interior is classy, luxurious and, importantly in this segment, not over the top. There’s no garish chrome, shiny aluminium nor cheap plastics here. It’s a genuinely pleasant place to be and you can feel it has been built for comfort and durability. I suspect it is going to age well (it has no choice given the longevity of these models). As we know from those dimensions, it’s an enormous vehicle. Up close, it feels even bigger and opening the powered tail-gate reveals space behind the rear seats that would be the envy of some caves.

Everything you need is standard: wireless charging, USB ports for every occasion, all seven seats (two jump seats folded into the boot floor) are electrically operated, air-conditioned and heated seats front and rear, heated steering wheel, and the list goes on. Surprisingly, there is no tow bar as a standard offering and another notable omission is a sunroof.

So, petrol or diesel? The diesel motor is good, great even, and more economical for sure. That petrol engine is intoxicating, though. It is super responsive, fast and powerful. In terms of gearbox, there’s only a 10-speed auto across the range. Happily, it is very good indeed with shifts so smooth you can’t really feel them.

On the road, that feeling of being enormous continues. Fortunately, it has lane control assist and the Toyota system managed remarkably well to find lanes I thought it would struggle with because there were barely any discernible road markings. Toss the LC300 into a corner too rapidly and the system will slow the car down to a sensible speed, which is rather clever.

The ride on the 300 is so soft, you could prance over a rocky river crossing without noticing the change in road surface. It is fantastically comfortable. It’s like wafting about inside a marshmallow, all the time, on anything. You could quite easily do the Joburg to Cape Town trip in one hit in the 300, turn around and come back. It makes highway cruising effortless, a touring car built to turn hundreds of kilometres into child’s play.

It’s almost ridiculous to think that it’s as good off-road as it is on-road. The short bits of rock we made the poor thing climb over, the few dunes it ploughed through and the considerable quantity of horribly rutted dirt roads it had to cover at speed were more than enough to convince me this new 300 is not going to get stuck…anywhere.

This is no 4×4 poser. Its luxury meets go anywhere with 70 years of hard-earned credentials. I can understand that Toyota’s engineers may have stressed about continuing this legacy but I can assure you their efforts have done the Land Cruiser nameplate proud. This 300 is better in every single way, which is about the highest praise possible.