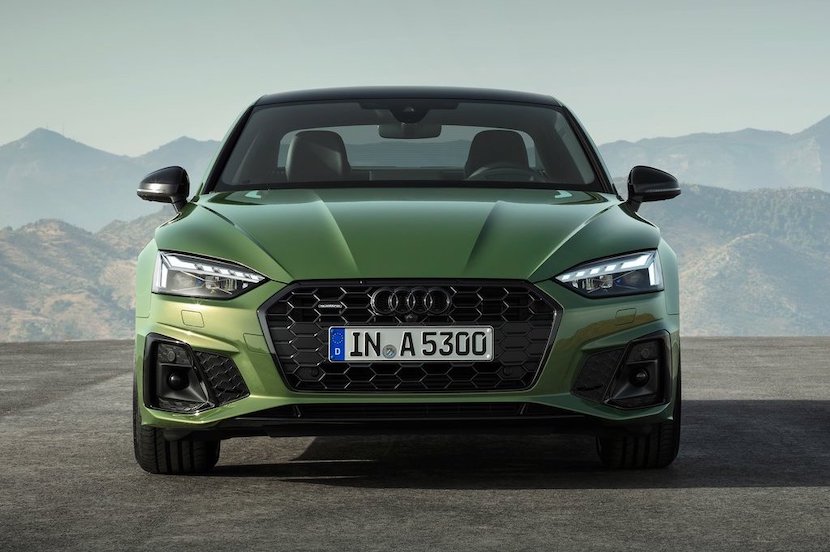 Once a fairly popular choice of body style, the sleek coupé has fallen out of favour with consumers worldwide. As premium buyers now veer towards the high-riding practicality of an SUV, the two-door is seemingly forgotten. Not that long ago, most mainstream brands would be able to offer you a desirable, aspirational version of its humdrum family saloon.

That is a bygone era, though, the coupé shape now relegated to the upper echelons of motoring. Happily, there are still a handful of svelte four-seaters that still in at under R1m. The recently revised Audi A5 is one of them.

First seen in late 2016, the second-generation A5 has received several updates. While the styling is largely unchanged, Audi has reworked the front end, replacing the old grille with a flatter, wider version, lending it more aggressive styling. Also adding to the more dynamic stance are the larger air inlets. Round back, new trapezoidal exhausts give the rear end a fresher look.

Tested here in 40 TDI S line guise, this oil-burner comes in at a lofty R882 000, priced squarely between its two main rivals, the soon-to-be-replaced Mercedes-Benz C220d AMG Line (R876,360) and the BMW 420d M Sport (R898,516). To keep would-be buyers from sauntering off to a competitor’s forecourt, Audi has packed the A5 40 TDI S line with plenty of standard features.

Specific to the model is the S line package (the only trim level available for the 40 TDI), which nets you 18-inch alloys as well as a combination of matte and chrome body detailing. In the case of our Turbo Blue test unit, it boasted optional 20-inch Audi Sport alloy wheels (R35,500), a panoramic sunroof (R22,000) and a black styling package (R8,450).

Despite having two doors, the A5 boasts a capacious interior blessed with high levels of perceived quality. Everything you touch is premium, with optional Nappa leather seats (R5,150) adding that extra luxurious feel. The A5 does without the touchscreen climate control; instead, you receive a traditional set-up with dials and buttons. Not only does this work better from an intuitive point, but the buttons and dials are damped beautifully and are an absolute joy to use. Standard equipment includes Matrix LED headlamps, ambient interior lighting and parking sensors in the fore and aft.

For those in front, there is plenty of room to spare. The cabin is spacious and feels airy, no doubt aided by the panoramic roof. The optional electric seats are an absolute boon, enabling rear passengers to hop in and out at the touch of a button. While they’re useful, the seats are best used for shorter journeys or small children. Even with a short passenger up front, rear legroom is at a premium, although this criticism can also be levelled at the A5’s rivals.

As a long distance tourer, the large boot will come in handy. On an impromptu trip to McGregor, the 450 litres swallowed up our luggage. It beats the 4 Series’ packing space by 10 litres and the Mercedes by a useful 40. What’s more, the rear seats fold down should you need to transport awkwardly shaped items.

Prod the starter button and the diesel clatter is at odds with the elegant styling. It may seem strange to fit a grand tourer with a turbodiesel motor but the agricultural clatter is easy to deal with when you see the results at the filling station. Audi claims an average fuel consumption of 6.0 L/100 km. On our way back to Cape Town, I recorded a remarkable 5.7 L/100 km. Overall, it sat at 7.0 L/100 km for the duration of the trip, giving over 700 km on a tank.

It’s not slow, either. Zero to 0-100 km/h is dispatched in a reasonable 7.2 seconds, while the top speed is pegged at 235 km/h. Impressive that may be, but the A5 is about more than performance figures on paper. Its talents are displayed on the long road, where the torquey motor allows for smooth, quick and safe overtaking. The quattro all-wheel drive uses the 140 kW and 400 Nm efficiently, putting the power down with plenty of grip.

The quick responses are helped by the slick-shifting seven-speed S tronic ‘box. At speed, it’s marvellous, blitzing through the gears with ruthless efficiency. However, it does tend to feel cumbersome in town, with a slight delay between planting the accelerator and the car taking off and creeping along. Overall, Audi’s eight-speed automatic would have been a far better companion.

As far as driving dynamics are concerned, the Audi straddles a fine line between the BMW’s razor-sharp dynamics and the C-Coupe’s comfort-oriented set-up. It’s no sports car but it grips with confidence and goes through corners with aplomb. Even with the 20-inch alloy wheels, the ride was, for the most part, compliant and composed. It is caught out by sharp ridges and potholes though. If you can live with the smaller alloy wheels, save yourself R35,500 and retain the more sumptuous ride afforded by the 18-inch alloys.

Five years on, the @audisouthafrica A5 still looks fresh and classy. This is the 40TDI, with 140 kW and 400 Nm of torque. Looking forward to cruising about in this frugal coupé. pic.twitter.com/rss85GqkK5

It’s hard not to be enamoured with the A5. It does everything remarkably well and, with the exception of the occasionally clumsy S tronic gearbox, it’s an absolute peach of a grand tourer. While many may not see the value of a diesel-powered cruiser, it would make a consummate long-distance tourer, melding phenomenal comfort and refinement to budget car-aping frugality. Choosing between Mercedes, Audi and BMW would be tough. Until I’ve driven the BMW, we cannot give a definitive choice, but the outgoing C-Class is outclassed by Ingolstadt’s grand tourer.