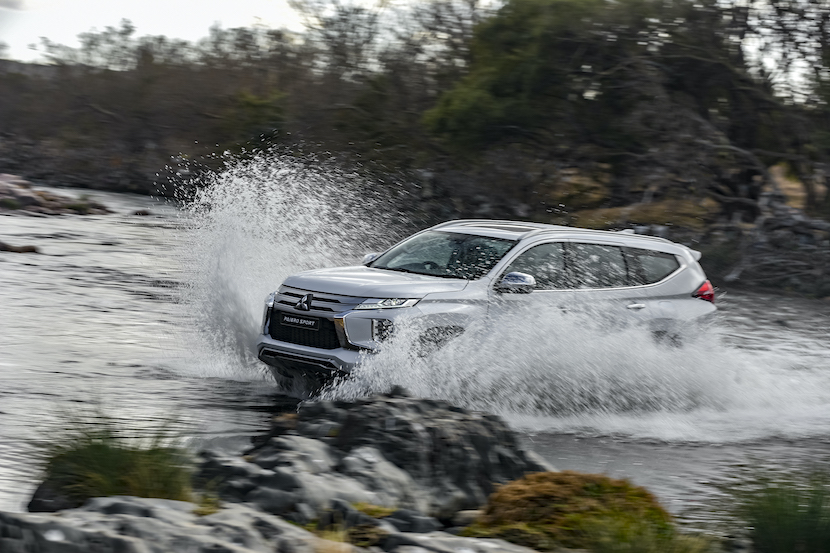 Forty years ago, if you wanted something that could carry you to the middle of the Kalahari or traverse the Outback, there were really only a handful of choices. Toyota’s legendary Land Cruiser was the most popular, with the Land Rover following closely behind. Nissan’s Patrol and American carmaker Jeep also enjoyed great popularity.

1981 saw the introduction of another iconic nameplate; a vehicle that would become synonymous with durability and ruggedness. First seen at the ’81 Tokyo Auto Show, the Mitsubishi Pajero would go on to showcase the brand’s prowess at building indestructible 4x4s. Four decades on, the brand has decided to pull the plug on the current generation, which has been around since 2006.

Carrying on the legacy is the Pajero Sport, a cheaper and just as capable SUV based on the brand’s Triton bakkie. The third-generation derivative (introduced in 2015) recently received a facelift in an attempt to keep the SUV fresh, especially with its fiercest rivals – the Toyota Fortuner and Ford Everest – also receiving a nip and tuck. Has Mitsubishi done enough?

The distinctive styling will certainly help the Pajero Sport stand out from the crowd. Wearing the brand’s most recent front–end treatment, the seven-seater SUV is instantly recognisable as a Mitsubishi. The chrome treatment and slim headlamps may not be to everyone’s taste, but it works. Eighteen-inch alloy wheels look good and don’t impede on the impressive ride quality, no doubt aided by the plump 265/60 R18 rubber.

Although a plusher Exceed spec is available, the standard Pajero Sport is still well-equipped. LED fog- and headlamps are standard, with a reverse camera and rear parking sensors to help extricate the 4.8 metre-long SUV from tight spaces. Climb aboard with the keyless-entry and you’re greeted with a host of luxury features. Most notable is the leather upholstery, which feels supple. The driver’s seat is electrically adjustable with climate control, a digital instrument binnacle and cruise control enhancing driver comfort.

Interior quality, for the most part, is rather good. There are several cabin surfaces trimmed in harder, less premium plastics. To be fair, this criticism can be levelled at the Pajero Sport’s fiercest rivals as well. Everything feels solid and there are premium touches, such as the leather-trimmed steering wheel and leatherette surfaces on the door panels. Interior styling certainly isn’t the most inspired but it is functional and does the job well.

Prod the starter button and the 2.4-litre, four-cylinder turbodiesel fires up. It is rattly on start-up but becomes impressively hushed once on the move. Power is rated at 133 kW and 430 Nm of torque, more powerful than a similarly priced Fortuner 2.4 GD-6 and on par with the Everest. While not rapid, the output is sufficient to lug the two-tonne plus Pajero Sport about with ease.

It may not be the last word in performance but it’s impressively refined and, more importantly, has the ability to return superb fuel economy. Mitsubishi claims the mid-range SUV can achieve an average of 8.1 L/100 km. Matching the manufacturer’s claim is usually tough but on a fairly traffic-heavy drive into the city and back (with the climate control on full blast), I managed 8.3 L/100 km. With a 66–litre fuel capacity, 800+ km on a single tank is achievable with careful driving.

Traditionally, SUVs based on bakkies tend to have a stiffer ride than their road–going counterparts. The Pajero Sport is no different; the road-biased Hyundai Santa Fe and Kia Sorento offer a far superior ride quality, but the Mitsubishi is not far off. It rides a touch smoother than the Everest and feels more resolved than the Fortuner over bumps. Owing to the high centre of gravity, body roll is noticeable through the bends and is mitigated by more considered steering inputs. Off-road, the four-wheel–drive system tackles the rough stuff with aplomb and can easily rival pukka 4x4s. On gravel, the Pajero Sport continues to impress with its smooth ride and abundant grip.

The large body pays dividends when it comes to passenger space. Simply put, the Pajero Sport is vast inside. Those up front will have no problem finding a comfortable seating position, although height adjustment for the passenger seat would be a welcome addition. The electrically operated driver’s seat works nicely with the steering column that is adjustable for rake and reach.

The second row has plenty of knee- and headroom with individual air vents for those seated in the middle. The rear pew – made up of two seats which fold flat into the boot floor – offer up decent amounts of room for adults up to 1.75m. Anyone taller would feel a touch cramped but should be okay on shorter journeys. What’s more, the seats stow away with ease but children may find it difficult to collapse or erect the seating by themselves.

The Everest and Fortuner enjoy great popularity in South Africa and so they should. Both offer great value; packed with goodies and off-road ability (if you opt for the four-wheel-drive models, at least). However, the Pajero Sport offers buyers a compelling alternative. Price-wise, the Pajero Sport sits between the Fortuner 2.4GD-6 4×4 and Everest 2.0SiT 4WD XLT. Yes, the Toyota is around R30,000 cheaper, but it also has less power and fewer toys. The Everest may match the Pajero but doesn’t come standard with a service plan despite being R3,000 dearer. The Pajero Sport offers exceptional value, superb comfort, plenty of space and myriad standard features. The Mitsubishi’s off-roading prowess is commendable and, at R684,995, deserves serious consideration when shopping in this segment.

For the past week, I’ve been driving the @mitsu_motors Pajero Sport 2.4 DI-D 4×4. Supple ride, spacious interior and generous equipment levels are highlights. Diesel engine is efficient. Claimed fuel consumption is 8.1 L/100 km. Averaged 8.3 L on a drive into the CBD and back. pic.twitter.com/5aafB7CK8z