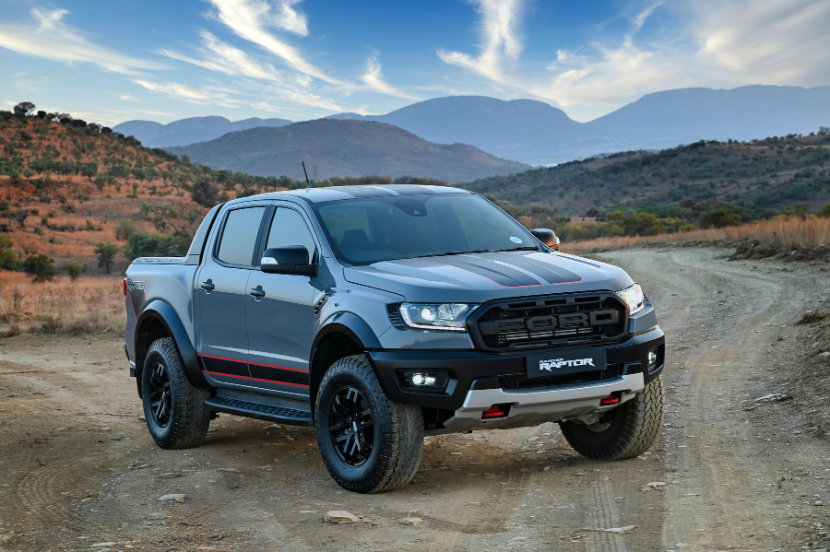 Ford’s Ranger Raptor is well known to us at BizNews Motoring. It’s the pinnacle of the Ranger line up and for good reason as we’ve outlined previously. This Special Edition (or SE for short) derivative is the swansong of the outgoing Ranger model, which will be replaced in 2022.

The Special Edition adds twin matte black racing stripes – edged with red contrast lines – to the roof and bonnet, which then flow down the body side, rear wings and onto the tailgate.

Complementing the distinctive stripes, the front tow hooks are finished in red while the flared wheel arches, front and rear bumpers, door handles and Ford-embossed grille feature a matte black finish to further distinguish this from the standard Raptor. Also new to the SE is the integrated black sports hoop, derived from the Ranger Wildtrak, and standard fitment of the lockable Mountain Top black roller shutter, as seen on the Ranger Thunder and Stormtrak. This great addition allows owners to safely secure goods in the load compartment, away from prying eyes and protected from the elements.

What’s really important about the Raptor is, of course, summed up by one simple word: suspension.

The technicalities behind what goes into the Raptor’s chassis additions would bore anyone without an anorak or a 4×4 fixation. The short version is the Raptor comes with clever bits from Fox Racing, developed in conjunction with Ford engineers, and very clever chassis tweaks that put the Raptor into a different league when it comes to fast off-road handling.

We travelled several hundred kilometres of fast (and I do mean fast) gravel roads simply because we could. Travelling quicker than one might on some national highways, the Raptor was perfectly happy and comfortable on the loose road surface. It more than lives up to the hype.

What I wasn’t expecting was to see how good it is on the slow, rocky stuff. We were lined up for a 4×4 course that was pretty much overlanding with occasional two-tracks if you looked hard enough. Time and again we went over boulders and other obstacles that would have ripped out the sump off any lesser vehicle. The Raptor is pretty wide at 2,190mm but even so – with the knobbly high sidewalls of the General Grabber all-terrain tyres that now come standard – the beast simply bulldozed over them with an impressive degree of surplus capacity.

The 2.0-litre bi-turbodiesel does a balanced job of delivering enough power (157kW and 500Nm) traded against fuel economy, claimed at 8.3 l/100km. Mated to a 10-speed automatic gearbox, the Raptor isn’t what one might describe as quick – it is ‘just a bakkie’ after all – but offers enough torque in all situations to handle towing up to 2.5 tons and comfortable overtaking manoeuvres.

The interior is comfortable with excellent dust control. Seats are large, supportive, bolstered and springy and your back is going to enjoy the drive. I didn’t feel stiff for a moment despite being tossed about as the Raptor pulled itself over seemingly impossible terrain four hours on end. Enjoying gravel roads at speed, holding normal conversation levels, no matter the road surface, I really appreciated just how well refined it is.

All this Raptor-ness comes with a R965,300 price tag. The question is this: is this Raptor that much better than a ‘standard’ Ranger considering the extra cash you’re going to need to lay out? This is harder to answer and much will depend on what you use the vehicle for. If you do regular gravel time, it is a no-brainer. And if you do high mileages, the extra comfort levels really stack up for me.

If you’re merely a city street cruiser, it might be harder to justify a Raptor but since when has that stopped anyone? If you want the best, the argument is moot. Just get the Raptor and be done with it; you won’t regret it.