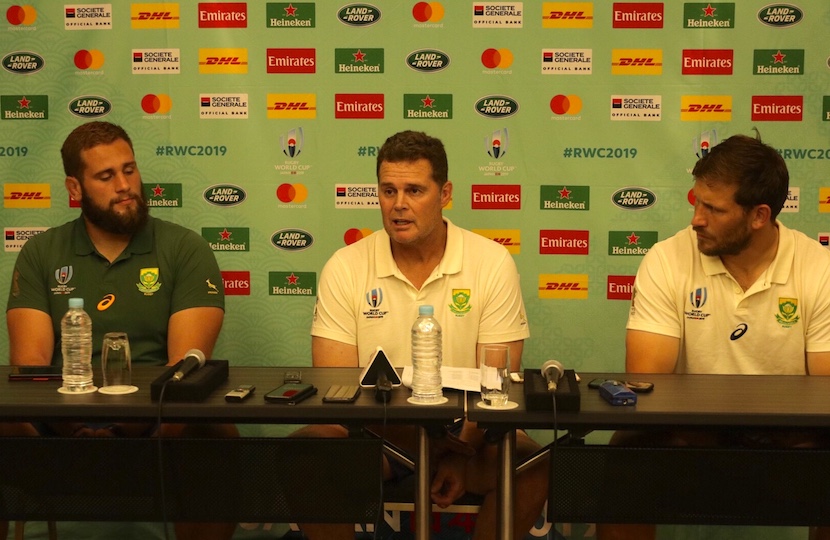 The debate over lousy referees is over, and coach Rassie Erasmus is focused on the Springboks’ upcoming clash against Namibia on Saturday. The squad announcement at the Bok hotel in Nagoya ran slightly behind schedule as the players had to drive in from their training field about half an hour in Ichinomiya, where another large local crowd watched the players going through their paces. The team is quite predictable with all those players not used against New Zealand now getting a run. Schalk Brits is again given the captain’s armband, a role he played in the warmup against Japan. As expected Thomas ‘the Tank’ du Toit will get a chance to make his World Cup debut after flying in to replace the unfortunate Trevor Nyakane whose World Cup ended in injury and tears last Saturday. Du Toit sat alongside Erasmus at the team announcement, along with Frans Steyn who starts the Test for the first time since September 2012. The only World Cup winner in the squad has played 8 Tests since then – all off the bench. While the Boks are expected to put a cricket score past Namibia, Erasmus isn’t focused on a big victory margin. He says he just wants the win. We presume he wants a bonus point as well. – David O’Sullivan

The Springboks have rotated their squad for Saturday’s must-win cross-border battle with northern neighbours Namibia, making 13 changes to the starting line-up that appeared in the opening Rugby World Cup clash with New Zealand.

Rassie Erasmus, director of rugby, gives first appearances in the competition to nine players while Makazole Mapimpi (left wing) and Lukhanyo Am (centre) are the only players from the 23-13 reverse against New Zealand, to make back-to-back starts.

In addition, six of the opening day starting XV re-appear on the bench – including captain Siya Kolisi – while all of last Saturday’s replacements (with the exception of injured Jesse Kriel) are in the starting lineup.

The starting XV features nine of those who started the opening match of the international season; a 35-17 victory over Australia in the Castle Lager Rugby Championship in July.

One of the newcomers to the starting line-up is Schalk Brits, who moves to a new role in the back row at No 8. Brits captains the team for the second time having led the Springboks in the 24-18 victory over Argentina in Pretoria.

“Every match is a must-win game for us now and we are treating this match with the same level of preparation as we did New Zealand last week,” said Erasmus.

“This is a Springbok team that is hungry to play and show what they can do and the majority of them have had the chance to play as a combination together a couple of times this season.

“They’ve got an important job to do: you always lose momentum in a defeat and we need to regain that with a victory and a strong performance.”

The match will be only the third meeting between the countries, but Erasmus does not expect a repeat of the blow outs of the previous meetings.

The Springboks recorded a 105-13 victory at DHL Newlands in Cape Town on the eve of the 2007 Rugby World Cup; and the teams met for the second time during the 2011 tournament in New Zealand, with the Springboks shutting out Namibia 87-0.

“Already we’ve seen that the Tier 2 nations are increasingly competitive in this tournament,” said Erasmus.

“Namibia held Italy to a 25-point margin (47-22) in their opening match and scored three tries in making Italy scrap all the way.

“There’s no denying, we’ll start as favourites but we’ll get a helluva shock if we think that’s enough to win the game. We have to treat all opponents in this tournament with equal seriousness, stick to our planning, bring intensity and then hopefully we’ll get our rewards.”

Frans Steyn, Francois Louw and Tendai Mtawarira all make second appearances against Namibia – having played in the Rugby World Cup meeting eight years ago – to provide a spine of experience to a team which has another five players yet to reach double figures in caps (Warrick Gelant, Sbu Nkosi, Mapimpi, Herschel Jantjies and Kwagga Smith).

“There’s a good blend of serious experience and serious talent in this line up and I’m looking forward to seeing them perform,” said Erasmus.

He explained that Brits would cover the replacement hooker position and that Franco Mostert (lock) would cover the loose forward positions along with Siya Kolisi, who continues his rehabilitation with more planned game time from the bench.

Thomas du Toit, who only arrived in Nagoya on Tuesday as an injury replacement for Trevor Nyakane, goes straight into the match day 23 as a front row replacement.

The match kicks off at 11h45 (SA time) and is available on SuperSport channel 201 or SABC radio.

The Springbok team to play Namibia in the City of Toyota Stadium on Saturday is: