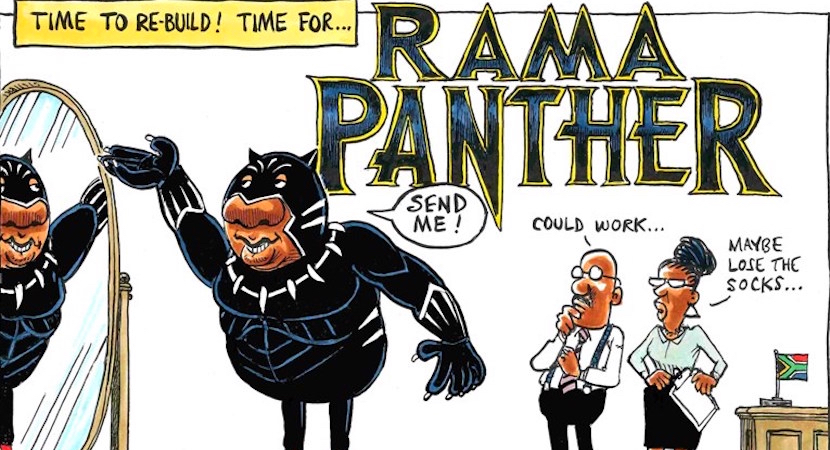 CAPE TOWN— If you’ve seen The Greatest Showman, you’ll know how the central character walks that thin line between empowering society’s most disadvantaged and scorned people and using them to make money. The conclusion is left up to the viewer, but their loyalty to PT Barnum is without question as they team up with him to rebuild from the ashes of prejudice and hate. Reading this analysis of President Cyril Ramaphosa’s recent investment summit conjures up comparisons between his showmanship and ability to win the trust of business skeptics and PT Barnum’s remarkable journey. The analogy works even better if you adapt it to compare the thin line the ANC has walked from the Zuma era to now. The most profound comparison is in attitude, aptitude and confidence. Ramaphosa’s Big Tent is his philosophy of subjecting challenges to the collective wits of smart people who believe different things, but who can arrive at a common purpose. Astute journalist Ferial Haffajee, compares him to an emperor, enthroned as he was on a white chair as global billionaires sang his praises and pledged solid cash investments in the newest version of South Africa. Story courtesy of the Daily Maverick. – Chris Bateman

By the end of Friday’s investment summit I was punch-drunk with the billions being pledged by the dons of capital. Men and a few women in suits waited patiently as the BBC’s Lerato Mbele-Roberts corralled them in a cavernous room at the Sandton Convention Centre to make public investment pledges – in one minute and one minute only – to a beaming President Cyril Ramaphosa, who sat in a white leather chair.

Jack Ma comes to the party too

It was a throwback to ancient days in some ways — as if they were merchants of old making offerings to an emperor.

By the end of the day Ramaphosa had found the pot of gold in his rainbow nation and he tallied it at R290 billion in investment commitments with another R400 billion in pledges from various countries, notably China.

Mr Jack Ma is the quintessential candidate for #ThumaMina. I asked him to come to our inaugural investment conference and he responded and said: “Mr President, send me…” Thank you Jack for honouring our invitation. pic.twitter.com/OhX5wTBrKv

He even persuaded a contemporary Chinese emperor to come along to witness: Jack Ma, the co-founder of global tech giant Alibaba, is like the emperor of the global digital dynasty, and he spoke at the final session. Ma is one of the world’s richest people.

“In five minutes, I fell in love with this guy,” said Ma about his first meeting with Ramaphosa.

After an investment strike which stretched back to President Thabo Mbeki, Friday was an extraordinary sight that signalled a new optimism and a shift in business sentiment.

The day was more remarkable when you consider the realities. South Africa is a beautiful but low-growth, high-unemployment, high-regulation country with among the most tjatjarag trade unions in the world.

But South Africa also works in ways for which us locals don’t give ourselves enough credit. Investors reeled off the reasons for their investments: Economic infrastructure is good; it’s an easy road into the rest of Africa and the financial system is state-of-the-art (for corporates, if not consumers).

The investors will blast new mines (Ramaphosa declared mining a sunrise, not a sunset, industry in February, which may have something to do with renewed confidence in the sector), lay 5G networks, start a state-of-the-art anaesthetics manufacturing plant in Port Elizabeth and push many more Mercs and other hot wheels off the assembly lines.

And, in the most remarkable announcement of the day, the entrepreneur Ashish Thakkar of Mara, a Pan-African conglomerate, said he is going to start a billion-rand smartphone manufacturing plant here. Take that, Apple. And Huawei.

Yes, some announcements are old

My colleague and I rapidly checked and it’s true that not all the investment announcements are brand new. Mercedes-Benz has announced the R10 billion ramp-up of its C-Class manufacturing facility a few times.

Anglo-American’s R71.5 billion sounds huge, but an expert says a lot is repackaged investments and a lot of it is sustaining capital. Sappi’s R7.7 billion investment had been announced in March.

Vodacom promised a R50 billion rollout of a new, super-fast 5G network, but if you look carefully, the telecoms giant has been talking about that for a few years. The new investments are often tied to incentives. The car manufacturing plants get excellent subsidies and Minister of Trade and Industry Rob Davies is handing them out left, right and centre to other manufacturers.

Once the detail of Thakkar’s deal is studied, you will probably find that it is richly incentivised; as likely is Aspen’s pharma plant in Port Elizabeth.

Symbolism of the investment jamboree

However, if the only response to the investment pledges is to grouse that they are not new, that’s to completely miss the point. Friday marked a shift in many ways.

Business has Thuma Mina-ed itself into a frenzy and this is a good thing, because South Africa’s economy is one-third public and two-thirds privately held. Business confidence is vital.

Thuma Mina means Send Me. It is the title of a Hugh Masekela song and now is the theme of Ramaphosa’s presidency, with its call to voluntarism and partnership.

There is no way that even a government of high regulation which runs one of the most progressive tax systems in the world can achieve social justice on its own. Ramaphosa has got business back on side after the regime of former President Jacob Zuma alienated most of the private sector other than a select group of tenderpreneurs whom he helped enrich.

And Friday also means that the policy of radical economic transformation is off the table as policy or practice. This term is Zuma-era coinage and refers to a state-sponsored mish-mash of faux radicalism and old-style Soviet socialism, including expropriation without compensation and the nationalisation of the Reserve Bank.

You may still hear some of it at ANC party events and on the election stumps, but Ramaphosa has raised a flag of pragmatism and has doffed his hat at a mixed-economy, growth-led model.

That old state-led model of growth and employment favoured through the Zuma decade is dead.

Does it mean neoliberalism?

But Friday’s investment summit does not by any stretch of the imagination signal a neoliberal order. South Africa’s labour laws would not allow it, nor would our high rates of unemployment and poverty. Tax rates are still high, the labour market protects workers and the financial sector is tangled in red tape which is about to get tighter.

Competition is improving and a new competition law will open up sectors that are still too concentrated and where price-gouging continues to hurt consumers.

Ramaphosa’s presidency is often narrated in party-political terms which include these themes: He is facing a plot, he is being out-Aced by the party’s secretary-general, the ANC is going to get a hiding at the polls in 2019, and he will be out by 2020.

We’re a country obsessed by party politics, but it’s not a good gauge by which to understand Ramaphosa’s presidency.

If you want to understand what the president is up to, it’s better to look at the Big Tents he has erected to run South Africa. The Big Tent is his philosophy of subjecting challenges to the collective wits of smart people who believe different things, but who can arrive at a common purpose.

These metaphorical tents include the Jobs Summit, the Investment Summit, the Stimulus Plan, the advisory panels on land reform, on a new national director of public prosecutions and the three commissions of inquiry into State Capture, all sitting simultaneously.

Ramaphosa’s presidency is kicking into gear — and it is shaping itself in ways measurably different to what we have known before. DM