JOHANNESBURG — If these multitude of polls we’re getting lately on the 2019 elections are anything to go by, then the Democratic Alliance (DA) is set for a beating of note. The reality is that South Africa is screaming out for more competitive politics and better alternatives to that of the ANC. Since 1994, SA has effectively been a one-party state. In 2016, that looked like it was going to change when the ANC lost several key metro areas. But the DA in 2018 was leaderless, confused, contradictory and lurched from one self-induced crisis to the next — and this seems to be turning off voters, including its traditional base. The top leadership in the DA will be praying that these polls don’t come close to resembling reality come May 2019, otherwise, it could face a deep existential crisis. – Gareth van Zyl

Sixty-one percent of 3,571 adults interviewed face-to-face by research company Ipsos between Oct. 23 and Dec. 4 last year said they’d vote for the ANC, while 14% said they’d back the Democratic Alliance, 9% the Economic Freedom Fighters and 2% the Inkatha Freedom Party. No other party polled more than 1% support. Six percent of respondents said they wouldn’t vote or didn’t know who they’d support, and 5% declined to answer. 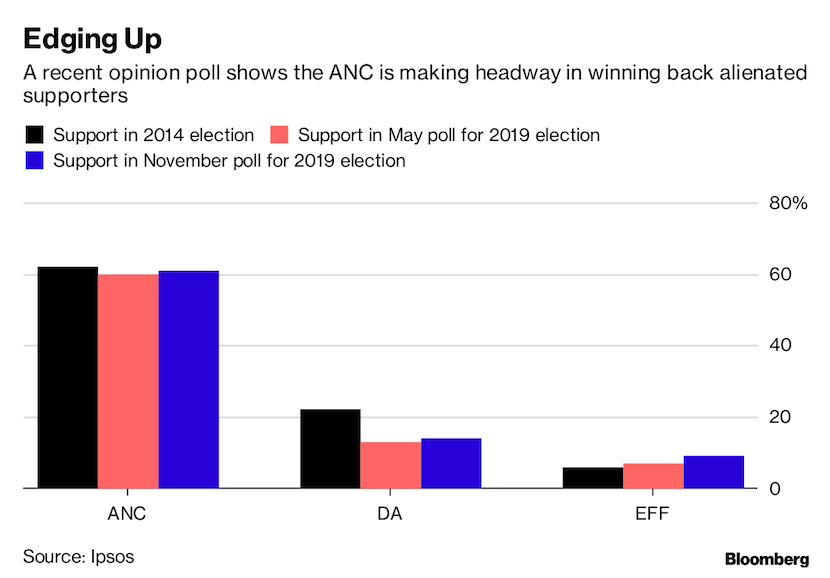 The ANC won power in the nation’s first multiracial elections in 1994 and secured 62.2% support in the last national vote in 2014, but its share tumbled to 54.5% in a municipal vote in 2016, largely due to discontent over Zuma’s rule. Cyril Ramaphosa, a lawyer and former labour union leader, won control of the ANC in December 2017 and became president two months later after the party forced Zuma to step down.

“At the end of the Zuma years, trust in the ANC was very low, but the party has recovered quite significantly in the last year,” Ipsos said. “The trust indices for both the DA and the EFF are in negative terrain.”

The DA, which won 22.2% of the vote in 2014 and 27% in the 2016 municipal ballot, has been plagued by infighting and made several public-relations blunders over recent months that may have cost it support. Top leaders of the EFF, which secured 6.4% backing in 2014, have become embroiled in a string of scandals, denting its image.

Another phone survey of 1,017 registered voters conducted by the South African Institute of Race Relations between Nov. 26 and Dec. 4 showed the ANC had 56% backing, the DA 18% and the EFF 11%. Based on a 69% turnout, the ANC would end up with 59% of votes cast, the DA 22% and the EFF 10%, the Johannesburg-based institute said.