Just a month ago, analysts predicted that the South African economy was very likely to contract by 7,5%. But, the recovery of the already unstable economy is threatened further by looming power cuts and other threats. Now, the figure sits at 8%. As South Africa gets used to more relaxed lockdown restrictions, the economy welcomes the return of some businesses that haven’t seen the light of day since March 27th. While many were overjoyed to start trading again, some businesses and people weren’t that lucky. Losing their jobs and livelihoods during the strict lockdown, the country now faces immense unemployment, further stifling the economy. – Jarryd Neves

By Prinesha Naidoo and Sarina Yoo

(Bloomberg) – Slow reforms and the return of rolling power cuts in South Africa could threaten the recovery of an economy that probably bottomed in the second quarter.

Africa’s most-industrialized economy will probably shrink by 8% in 2020, according to the median estimate of 29 economists in a Bloomberg survey that was published on Friday. That’s worse than the 7,5% contraction projected a month ago.

Read also: Global economy is in recession, but some investors are having fun

The government started a phased re-opening of the economy on May 1 and restrictions were eased further to so-called level 2 this week. However, business closures and job losses due to the lockdown that shuttered much of the economy, as well as blackouts imposed by state-owned utility Eskom Holdings SOC Ltd. from July, threaten output. The state still lacks a clear plan to revive the economy and reforms such as the sale of spectrum and easing visa regulations have stalled. 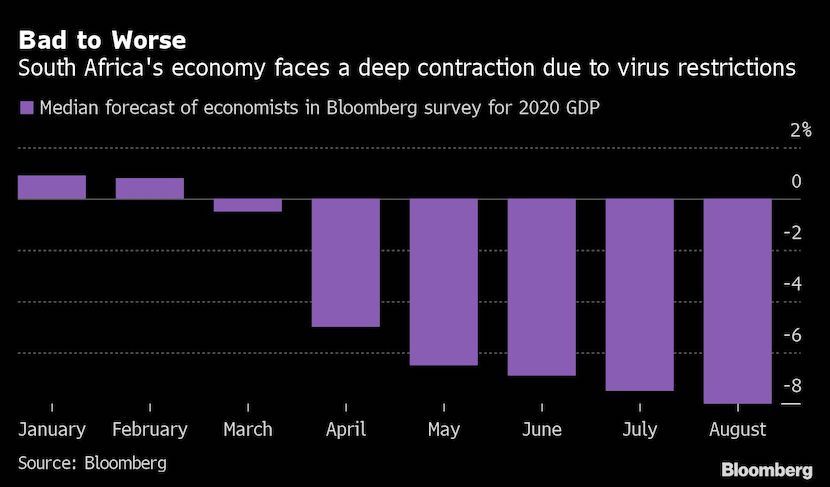 “The single biggest risk to growth is slow progress on reforms,” said Mpho Molopyane, an economist at FirstRand Group Ltd.’s Rand Merchant Bank. “Protracted periods of load shedding definitely pose risks,” he said, using the local term for power blackouts. The rebound could also be delayed if the global economy takes longer to recover back to pre-Covid levels, he said.

South Africa’s economy was already in its third quarter of a recession by the time the government imposed a strict lockdown on March 27th. That caused manufacturing production, mining output and retail sales to plunge in the three months through June, and the recession probably deepened.

“High-frequency data certainly points to the economy bottoming out in April and May, with the second quarter likely to see a record contraction,” said William Attwell, the London-based practice leader for sub-Saharan Africa at DuckerFrontier. 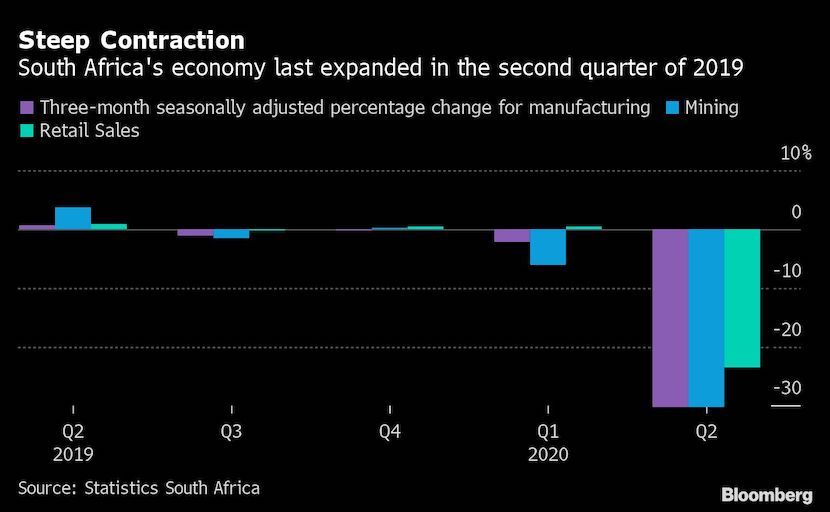 Central-bank forecasts show an annualised drop in gross domestic product of 32,6% for the three months through June from the previous quarter. The median estimate of 10 economists in a Bloomberg survey is for a contraction of 42,1%. That would be the deepest quarterly decline since at least 1990. The statistics office is scheduled to publish GDP data on September 8th.

The central bank reduced its key interest rate by 300 basis point this year to prop up the economy, while emphasizing that it can’t boost economic growth alone. However, on Thursday Governor Lesetja Kganyago said muted inflation gives room to respond to the damage caused by the pandemic if the nature of the shock turns out to be worse than forecast.

Read also: State of the nation: SA economy in recession – is there hope for investors?

South Africa’s economy remains stuck in the longest downward cycle since World War II, even as activity is expected to rebound off a low base next year. GDP could expand 3% in 2021 and 1,9% in 2022, according to the economists’ estimates.

Output will probably to improve in three months through September as the global economy gains momentum and business activity picks up as lockdown restrictions are eased, but demand is likely to remain weak throughout the year, Atwell said.

“The economy has definitely bottomed out from the sharp contraction in activity when it came to a near stand-still in April due to the lockdown. Although the recovery is underway, it is significantly weaker than what it could’ve been had government stimulus been deployed sooner and take-up been higher – a lot more jobs and businesses could’ve been saved. The resumption of load shedding, the weak demand environment, and the lack of clarity on policy reform doesn’t help.”