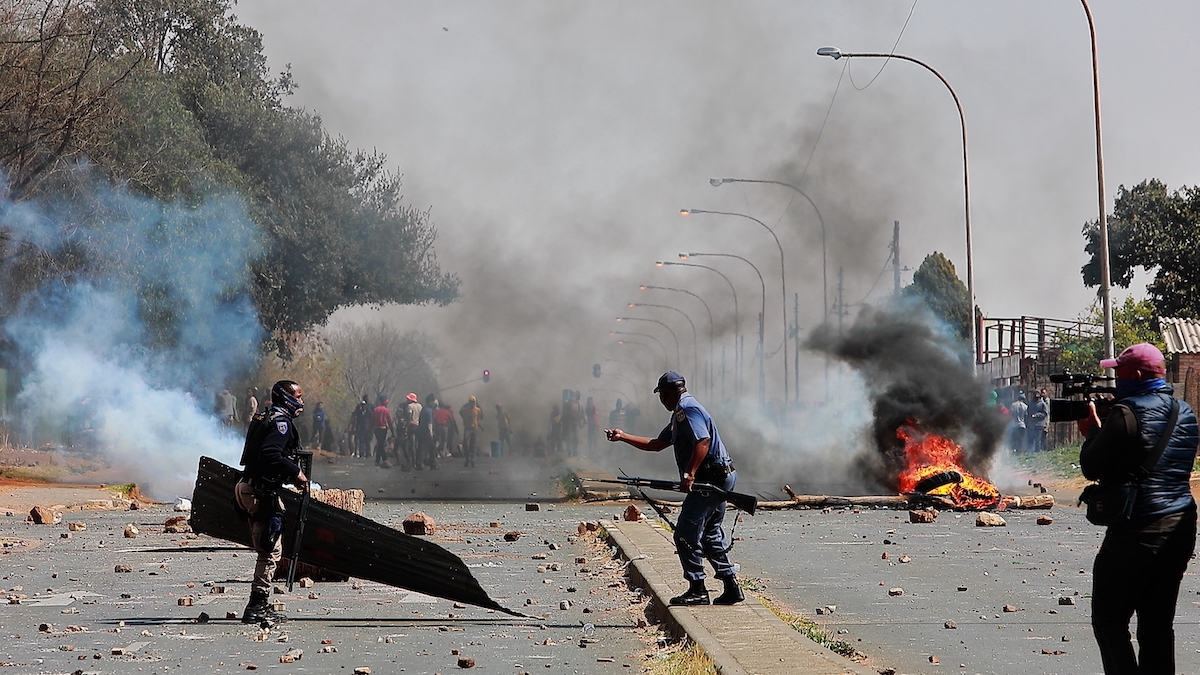 The article below argues that South Africa is still a very different political space from the authoritarian regimes in Tunisia, Egypt and Libya where the Arab Spring erupted. SA is still a noisy democracy with a free and open media, dissenting voices, and no overt sanction for insulting the government of the day. Political parties, trade unions, business and civil society groups all realise that South Africa is a pressure cooker, but the youth have shown little interest in organised politics. What is more worrying, however, is the failure of the state to respond decisively to the July 2021 unrest, which could encourage politically inspired anarchists to resort to violence again if they don’t get their way. And as lawlessness increases even further, transnational organised crime networks and local gangs are becoming increasingly brazen. Extortion, protection rackets, kidnappings, drive-by shootings, if allowed to encroach unchecked, will result in criminal networks being more of a destabilising factor than political actors. – Sandra Laurence

South Africa has been warned that it faces an ‘Arab Spring’: so what are the chances?

Former South African President Thabo Mbeki recently launched a sharp critique of the governing African National Congress (ANC) for failure to address what it has labelled the triple challenge of poverty, unemployment and inequality.

Mbeki, who led the party from 1997 to 2007, said the government seemed to have no plan to address these problems, warning that rising poverty and hardship, poor governance, and mounting lawlessness could see South Africa erupt into its own version of the “Arab Spring”.

The “Arab Spring” uprisings which swept across North Africa and parts of the Middle East more than a decade ago led to the overthrow of authoritarian regimes in Tunisia, Egypt and Libya. Many of the protesters were young and educated and had become disillusioned by the corruption and patronage that benefited only political and economic elites.

A common feature of these uprisings was that the existing constitutional orders had become so de-legitimised that they simply collapsed under the weight of social discord.

Mbeki’s prophesy is sobering, especially coming a year after devastating riots in parts of the country in July last year. With the plotters of what President Cyril Ramaphosa described as a failed insurrection still at large, many South Africans nervously await a repeat.

Political parties, trade unions, business, civil society groups all realise that South Africa is a pressure cooker. But the youth have shown little interest in organised politics. Their low participation rates in elections are a sign of that. There is a sense that something needs to change quickly, and radically. If not, the youth could explode in impatience and anger, a tsunami that even political parties will find difficult to contain.

President Ramaphosa used a public platform to respond to Mbeki’s criticism, almost a week later. Addressing the closing session of the ANC KwaZulu-Natal electoral conference he pointed out that the government did have a reform agenda to address these problems. He cited the unwieldy National Development Plan, government’s formal blueprint for achieving its long term goals, and the ANC’s own 2019 election manifesto as “the plan”.

Some of the priorities identified have since been translated into the government’s Economic Reconstruction and Recovery Plan, which aims to change the asset and resource base of the economy by making the ownership structure more inclusive.

Tellingly, the president referred to these measures as “reforms”, language that invokes the idea of incremental change. But such initiatives sound distant and removed from what is needed.

What people want to see is visible change in their daily lives, and more imagination on the part of their government in relieving their hardships. The R350 (about US$20.72) monthly grant to unemployed people during the COVID pandemic was a tangible response to the crisis that families facing starvation needed. Similar scaled-up measures to deal with the multiple crises are needed, and there is no time to waste.

Something needs to be done urgently to address a host of big challenges, ranging from the high cost of living to soaring fuel prices, and inadequate provision of basic municipal services.

Bored youth, with limited opportunities for work and gaining skills, get sucked into drugs or alcohol abuse, petty crime or worse.

Given the picture I have painted, is an Arab Spring likely?

It is impossible to make an accurate prediction, but two trajectories are plausible.

One is a repeat of last July’s devastating unrest. The failure of the state to respond decisively to the July unrest could encourage politically inspired anarchists to resort to violence again if they don’t get their way. They have tested the waters and seen what’s possible. And given that people remain frustrated about their lives, the country could see another outbreak of violence.

Another trajectory is the one in which lawlessness increases even further. Transnational organised crime networks and local gangs are becoming increasingly brazen. The police are overstretched and gripped by their own internal problems. This breakdown in respect for the law by criminals has the effect of eroding the legitimacy and authority of the state.

Extortion, protection rackets, kidnappings, drive-by shootings, if they are allowed to encroach unchecked, will result in criminal networks being even more of a destabilising factor than political actors. A convergence of these elements – a South Africa where disgruntled elements engage in ongoing destabilisation, and collude with, or even unwittingly create the space for criminal networks to run amok – does not augur well for a prosperous nation.

Uprisings like those that occurred in Tunisia, Egypt and Libya, were the result of combustible local conditions, triggered by a small spark. People were railing against political systems they saw as authoritarian and intolerant of dissent.

South Africa is still a very different political space. The country is a noisy democracy with a free and open media, lots of dissenting voices, and insulting the government of the day doesn’t carry any overt sanction.

It could be a blessing in disguise that the country is perpetually in election mode. The local government elections and national general elections occur every five years. Because they overlap each other, the country has an election every three years.

In between these events, political parties hold their own leadership contests, which serve as bellwethers for who is likely to occupy national office or local government seat. This ongoing extra- and intra-political competition serves as a pressure valve to absorb the energy that might otherwise bubble over.

Political assassinations, especially at the local level, are a pernicious by-product of this endless electoral churn. But the prospects of attaining office through outwitting, or ganging up with rivals, are still sufficiently attractive to the political classes.

This is not to deny that destabilisation is not widespread, something referred to by Ramaphosa when he addressed the nation on broadcast media on Monday 25 July. Sabotage of electrical infrastructure, illegal connections by community members, theft of cables by organised criminals might not necessarily be centrally orchestrated. Nevertheless, they delegitimise the authority of the central state.

Already, many young people engage in protest action. So-called service delivery protests are part of the South African experience: for the moment they remain largely localised and driven by single issues. Just five years ago, student protests through the #FeesMustFall movement saw activism on a national scale. The national mood changed; politics changed. Some of those young activists are now in parliament, in local government, and other spaces.

But they account for a small minority. There is a vast, restless sea of young people with unmet dreams and aspirations. They wake up to lives of poverty, joblessness, boredom. They see little change, and perceive the state to be indifferent to their plight.

Yet these same young people are energetic, connected via social media, and bursting to claim their space. Some are fortunate to come by opportunities, but for those from poor families, there is not much to persuade them that their lives are about to get better. Therein lies the challenge to political parties and the state.