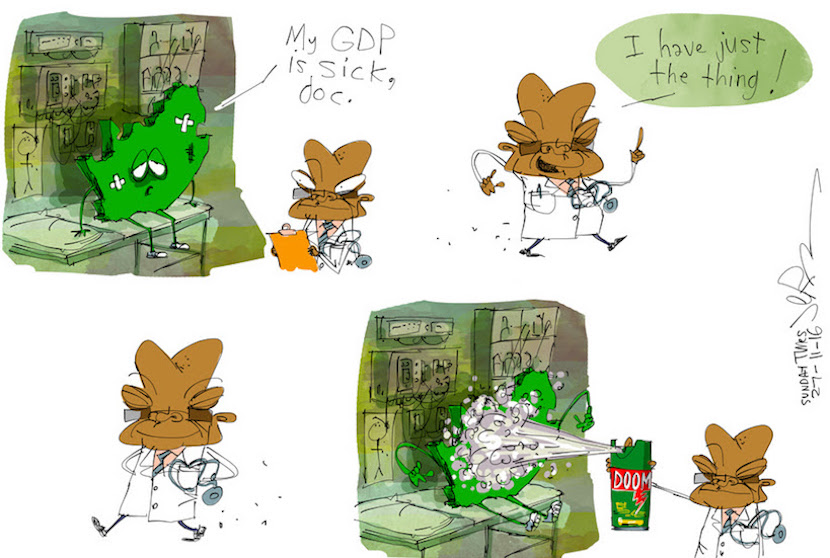 The cost of protecting President Zuma will be economic and political stagnation for another year, with the ANC taking a gamble on consolidating and controlling damage, avoiding (or perhaps delaying?) the huge internal divisions and fractures that followed his predecessor’s eviction. So argues seasoned political observer Daniel Silke as he briefly bemoans the outcome and lost opportunities of the NEC’s decision to continue backing Msholozi in the face of an unprecedented wave of continuing, dark ‘adverse’ events. Silke says ANC Secretary General Gwede Mantashe’s announcement yesterday that it was business as usual until the party’s 2017 electoral conference (at which Mantashe predicted outright that a different leader will be elected) is exactly as expected. In a way, it’s a pragmatic decision (for the ANC). Changing leaders now would cause huge disruption to the entrenched system of patronage, and perhaps most dangerously, set off a cacophony of whistle-blowing as the climate of fear lifts. The damage to the party image that this would cause would be almost terminal, making the Gupta State Capture, fraud charges (in fact the entire 10 point Zuma-controversy list) seem like a small bag of potatoes. Rather wait and ride it out. It seems to be working – so far. – Chris Bateman

It could have all been so different. South Africans could’ve woken up to a new President of the ANC and the end of the Jacob Zuma era. Business sentiment would’ve lifted. The Rand would strengthen. The ratings agencies would circle just a little less. South Africans might just begin to have a little spring in their step. And, the ANC would have a new leader who could begin the long and arduous process of reclaiming credibility and respect from a frustrated and disappointed electorate.

But this is the stuff of fantasy – the reality as we know it, is otherwise.

And indeed, there was little surprise in the NEC’s decision to keep Jacob Zuma in place. With the composition of the body carefully constructed over many years to protect its President, it was hardly likely that there would be sufficient critical mass to depose him. That there was a heated internal debate – despite the overdose of spin from Gwede Mantashe – is in itself remarkable but clearly short of any ability to exact change.

There were just too many factors to prevent the ANC walking the long road to Zuma freedom this week. For one, the President remains a venerated liberation hero despite the controversies that have tarnished this record. To throw him to the proverbial wolves with 783 fraud and corruption charges hanging over his head was always the stuff of fantasy.

The ANC and Zuma clearly wish to kick-for-touch for as long as possible using the delaying tactics of legal contestation to avoid any harsh penalty imposed on the President. Although it is unclear just how President Zuma might escape charges sticking (if found guilty by a court), a more complex option of a presidential pardon may still need to be hammered out. For this, the ANC needs time. And it needs to make sure that any successor to Zuma is reasonably compliant should the need arise. Given that it may be more than Jacob Zuma within the NEC that are ethically compromised, the end to the Zuma era becomes more complex and tougher to resolve in the short-term. Strike one for any recall.

Secondly, the ANC is deeply factionalised. Yes, some divisions are personality based. But more importantly, the party is ideologically all over the place. There is no cohesive binding factor at all – but for a continued ability to retain power and extract rent in the process. And even this is on the wane. The last thing the ANC would want is a heavy-handed and forced recall of Zuma akin to that of Thabo Mbeki. Such a shock to the system would undermine the already fragile party cohesion and could tear it apart in ways that would make the end of the Mbeki era look like a Sunday school picnic. A back-to-back recall for two successive Presidents was therefore something to avoid. Strike two for any recall.

Thirdly, the ANC is a lumbering giant. So lumbering, it works in painfully slow motion often detrimental to its own success. But, it does have an internal mechanism for change and a timeline within the next year to exact this. With the elective conference now 12 months away, there is a natural progression for a change of leadership. That conference does offer the party the chance to elect a replacement for President Zuma. And, with a year to go, it’s a natural event within the ANC’s constitutional calendar to exact the much-needed power shift. With the party clearly not ready for the internal fallout before Christmas this year, end 2017 just seems in line with expectation. Strike three for any immediate recall.

These three features clearly are predicated on a NEC still largely beholden unto its President. So whilst preserving the current troubled continuity might buy some time for Zuma and his operatives the decision not to act has its own distinct dangers.

Chief of these is the extreme political risk of retarding the re-invigoration of the ANC under fresh leadership by at least a year. Given the electoral losses of the party and the extreme demoralization felt across branch structures, retaining the awkward status-quo may be seen as detrimental to the health of the governing party.

The ANC needs every day with fresh faces and a new way of doing business to claw back its support and reconnect with its voters. And another 365 days lost until the end of 2017 can only delay the necessary recovery. In the interim, deepening internal squabbles, the debilitating race for leadership, an economy suffering under policy paralysis and the growth of opposition parties will further eat away at the core. Not to mention endless litigation of matters from the State Capture commission to the fraud and corruption charges.

Once again, the ANC has taken an extreme political risk. They have already seen what damage Jacob Zuma did to their local government poll results and in a year in which they desperately need to consolidate and work their way out of their self-induced quagmire, they risk even further internal distress. The inability to make a crucial decision of change may still come back to haunt them.

The ANC on the ground have to bear the brunt of an unresolved and festering leadership muddle. With the alienation of so many former ANC supporters who stayed away from the polls on August 3rd, another year of disenchantment can make it even tougher to win them back. Pity the branches who will have to limp along as the mother ship remains severely damaged.

And, as the NEC itself shows signs of being just a little more penetrable to dissent than before, the internal divisions now threaten to undermine the highest body of the party. Indecision and lack of political courage can now taint everything – from cabinet to NEC. For President Zuma, his own NEC is no longer a place of sanctuary. And, his cabinet too is deeply divided. Facing your political enemies so regularly must make for a very unpleasant governance process.

Finally, pity South Africa who now face yet another year watching the once great party of liberation tear itself apart and fail to implement urgently needed growth-oriented economic policies. Whatever affects the ANC affects the nation as a whole. And, until such a time that new leadership, talent and pragmatic policies are forthcoming, the nation will stagnate.

Protecting the President and finding a dignified exit strategy is a admirable sign of loyalty from the party. But the consequences thereof will severely test the ANC’s own weaknesses – and that of a depressed South Africa – in 2017 and potentially beyond.