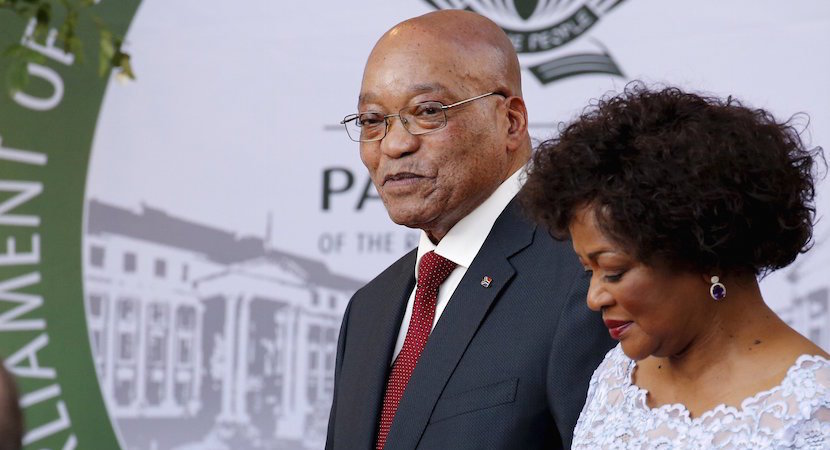 Below, we carry a rousing and emotive rallying cry for all South Africans to convince Speaker Baleke Mbete to allow MPs to vote with their consciences in the upcoming No Confidence debate against Zuma and his executive. It comes from Sunil Shah, a chartered accountant and former portfolio manager at Coronation who wrote a fascinating novel called White Man’s Numbers. Here, it’s about the numbers of ANC-MPs who’ll exercise their consciences. He distills the realities; it’s unlikely the Constitutional Court will grant the UDM’s prayer for a secret ballot – ever-mindful of the separation of powers, they’ll probably throw it back at parliament where Mbete (ANC Chairperson and NEC member) has the absolute, final say. Excellent long-odds for somebody prepared to put pocket money on a bet. If she exercises her conscience and commits political suicide, they’ll be instantly rich. In a similar vein, it will be political death-by-voting-yes for any ANC MPs (my argument being that Zuma’s spies will soon uncover the less-than-required-50 who might be emboldened by a secret vote). So, the ruling party MPs, who’ve grown figuratively, and in many cases literally, obese, sitting like frogs in the fast-warming waters of parliament, are unlikely to have felt the extra heat of the Anti-Zuma streams that have begun flowing in. They’ll open one eye as some extra-parliamentary noise interrupts the soporific chamber debate – and decided the water’s still comfortable enough. I’m sure Shah, who predicts a similar outcome, will shimmy along with the rest of us, should we be proved astoundingly wrong. What’s more likely is that, with a grandiosity and charisma similar to that of the late AWB leader, ET Terreblanche, Msholozi will, by contrast, stay in the saddle, courtesy of the Speaker, his seeming omnipotence, and her Leader/Driver’s ambitious ally and former wife, Nkosazana Dlamini-Zuma. – Chris Bateman

As the South African Nation reels from the carnage of the past month, the event that I found most repugnant was our President’s statement on his 75th Birthday in Soweto, on April 13th.  “I do not have stress. In the Zulu nation, stress does not exist.”

Let us pause for a moment. We are witnessing the trajectory of our country being redirected, from a promising emerging, rainbow nation to the dungeons of Zimbabwe…our people are suffering from mounting and violent strikes, food inflation escalating faster than our leader’s numeracy can keep pace, job losses that would make any politician shudder, thousands if not millions on the breadline with no hope of a dinner, a seismic downgrade to junk status on our foreign debt that will  take years to erase…and our ‘beloved’ President ‘does not feel stress – a white man’s disease that can be cured by muti.’

We are witnessing the nature of the man. The cabinet reshuffle our President imposed can leave no reasonable doubt of his primary interest: lining the pockets and promoting the careers of his cronies. This should have instantly mobilised a principled ANC which has the welfare of its citizens at heart, (the National Executive Committee in particular), to replace him. Can there be any doubt – even within the ANC – that Jacob Zuma is morally unfit to lead our nation?

Alas there is still doubt. To my horror, the members of the NEC who dared to oppose his recent decisions have been bludgeoned back into line. The hundreds of thousands of civilians protesting ‘Zuma must fall’ on April 11th , of every colour and creed, seemed like water flowing off a (large) duck’s back. Our Madiba is surely rolling in his grave.

Some history. Our constitution was formulated with a benevolent leader in mind, a Nelson Mandela; enormous executive powers were vested in the Presidency, such as his unhindered capacity to replace the cabinet.

This is in stark contrast to other democracies. For example, even if US President Trump has made some astounding nominations, the most important positions (about 1400 key posts including cabinet) have to be confirmed by the Senate.

Well, we have just witnessed how unsuitable our President is to deserve this authority: in the recent cabinet reshuffle Zuma had the audacity to replace a world-class, highly respected Minister of Finance, Pravin Gordhan, with a lying, cheating incompetent, Malusi Gigaba with negligible quantitative experience or qualifications, whose only ‘attribute’ is unquestioning loyalty to Jacob Zuma.

To support my claim on Gigaba’s ineptitude, I point you to his first key appointment: Christopher Malikane as his chief Economic Advisor, who wasted no time to claim, “In so far as the tender-based capitalist class has begun its war against the dominant white monopoly capitalist class, it has to be encouraged.”

Wait! Is this a bad horror movie? Did the new Chief Architect of Economic policy just endorse tenderpeurship? It’s the scourge of our nation, the get-quick-rich schemes of connected individuals as they sponge off immoral and wasteful government contracts that are paid for by the taxpayer. The press is littered with examples, from exorbitant (and unsuitable) coal contracts for Eskom to illegible and shoddy school books, awarded to a tenderpreneur at the nation’s expense. Is this how Malikane sees the way forward? And did he just disparage efficient market theory – which prevails across the world as the most efficient allocator of capital – with the all-embracing (and meaningless!) phrase, ‘white monopoly capital?’ I ask again, is this a bad horror movie?

Note our constitution allowed our leader to make this change without a word of consultation with the NEC. And no justification. The rot is spreading. Fast. And once initiated it will take an epic struggle to restore a measure of meritocracy in our economy.

Does any self-respecting, honourable ANC member of parliament still have any doubt about the unsuitability of Jacob Zuma? It’s a simple question, and it has to be answered now, as we approach this critical moment of truth of a ‘no confidence motion’ in our President. Does he or she choose to serve the country or join the cabal of Zuma cronies? Is the ANC Minister willing to feed selfishly off the Zuma patronage, in the guise of ANC solidarity, and feather his or her own nest, thereby subordinating the welfare of the country to ride the gravy train of Jacob Zuma? That is the ultimate question.

No honourable ANC Minister, you have a conscience. The dignity of Africa rests on your decision. The last bastion of hope in this corrupt continent. The only question remaining is how to oust and replace JZ for the future of this country, and thus inspire hope for Africa.

This is where the intricacies of the Speaker of Parliament need to be understood. The Speaker adjudicates over parliamentary debates. He, or in our case she, Baleka Mbete is compelled to take an independent and objective view of proceedings to ensure the opinions of Ministers are heard, irrespective of their party affiliation.

In any normal democracy, it would be patently obvious that the Speaker would be obliged to renounce her political affiliation to a party, in order to maintain her independence. But no, our Speaker is still the Chairperson of the ANC, still a member of the all-important NEC, as she presides over parliament. Her decisions are so biased, it is chilling. I present a clip of her ‘unbiased adjudication’ as she ejects the leader of the DA, Mmusi Maimane for calling a point of order, when our President refused to answer a perfectly legitimate question.

You need to stick with me as I elaborate. The motion of ‘no confidence’ has been called by the DA. The UDM has requested that the motion be voted upon by a secret ballot to the Constitutional Court This motion has also been supported by the EFF. However it is most likely that the Concourt will refer the matter back to the Speaker in Parliament who has the power to decide.

Speaker Baleka Mbete, is the lynchpin figure who needs to find her conscience, over-ride her affiliation with the ANC and approve the secret ballot motion, for the sake of our wonderful country.

Why is this important? Simply because the ‘no confidence motion’ is not simply for the President, but it applies to the entire executive Parliament if approved. All the ministers with executive positions would be dissolved, until a new President appoints a new cabinet. 76 ANC Ministers and their deputies hold executive positions, and they are not going to vote themselves out of a job. Do you really believe these prevailing ANC Ministers would express their rejection of JZ in public? In the current environment that is so infested with daggers and Machiavellian plots and sub-plots? What if the motion is rejected? That would be political suicide for an executive minister! That’s akin to asking the first Christians to vote for a confrontation –defenceless – against the hungry lions in the Roman coliseum. No, I don’t expect them to vote with their conscience in public. But I do expect them to prioritise the welfare of their country in private.

So there you have it. We have to convince our Speaker that a secret ballot is the only rational option given the circumstances. We have adequate cause: the cabinet reshuffle demonstrates Zuma’s total disregard for our people’s welfare. Baleka Mbete can approve the motion of a secret ballot given the powers vested within the Speaker, without referring it to the Constitutional Court.

Here’s Mbete’s email: [email protected]. I’ve done my bit. Now it’s your turn to send an avalanche of emails and your personal arguments, why the motion of ‘no confidence’ must be exercised by a secret ballot. It’s for the future of South Africa. For your sake and as envisaged by Nelson Mandela.