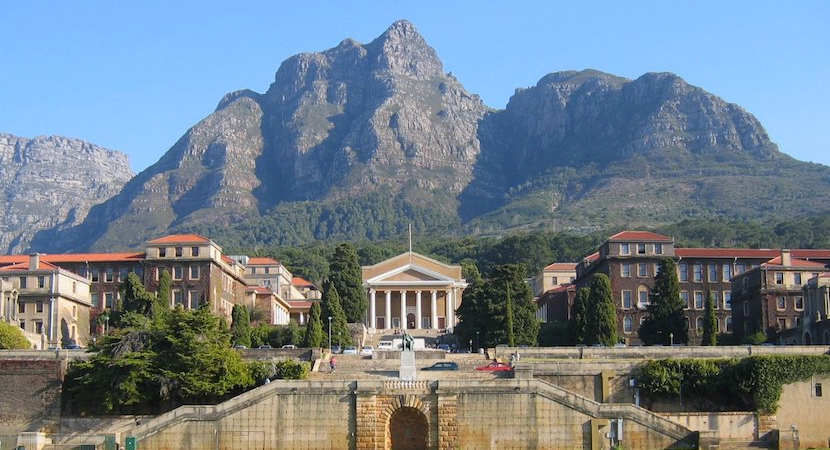 CAPE TOWN — The rationale behind some of UCT’s top academics and members of Staff for Social Justice who’ve condemned the use of security staff deployed to reduce arson and destruction of property on their campus entirely escapes veteran journalist and political observer Ed Herbst. Here he pulls together some damning factual findings by both Judge Dennis Davis and Naledi Pandor, Minister of Higher Education and Training, which when viewed together, makes the apparent academic support of the Fallists behaviour seem to be at the very least irrational and highly puzzling. As Herbst portrays it, it boils down to a justification of violence when circumstances demand it. No Ghandian Satyagraha approach here. If some of the more outspoken SASJ members perhaps included a caveat condemning the brutally-apparent violence, overt and covert, and regretted the anarchic damage to property and infrastructure, never mind the deadly psychological trauma inflicted and learning disrupted, there would be a handle to grab for meaningful dialogue to occur. Instead a toxic pall of alienation hangs over university campuses, country-wide. There has to be more to it than this. I know a minority of UCT’s SOSJ members and they are decent, caring healthcare humanitarians – something is out. – Chris Bateman

It is astounding how these so-called revolutionaries in academic life refuse to accept that there are a small group of disrupters who are bent on violence, whether it be carrying of rocks, sticks, burning of cars, art etc. Read the Supreme Court of Appeal judgment in Hotz and others vs University of Cape Town where the violence and destruction of art took place when there were no police on campus. That violence had nothing to do with security. What other than naked populism or opportunism explains how we have medical doctors who sanction, at least by implication, violence?

Institutions of higher learning have suffered nearly R800 million in protest damage in the past three financial years alone. This was confirmed by Minister of Higher Education and Training, Naledi Pandor, in 2 detailed replies to DA parliamentary questions. University and College campuses suffered over R786 million in damages, with the worst hit being North West University (R198 million), University of Johannesburg (R144 million) and University of KwaZulu-Natal (R101 million). These three institutions together account for over half of the total losses.

In November 2016, Judge Dennis Davis wrote an article for GroundUp about the criminality being perpetrated by the Fallist thugs at the University of Cape Town and he asked why ‘the so-called revolutionaries in academic life’ remained silent about the vile Fallist lawbreakers for whom attempted murder was not a step too far.

The last sentence – What other than naked populism or opportunism explains how we have medical doctors who sanction, at least by implication, violence? in my anchor quote extract, subsequently became particularly relevant.

In response to this GroundUp article, 31 UCT Virtue Signallers – with the name of a medical doctor, Lydia Cairncross, featuring prominently – co-signed a GroundUp follow-up article that called for less security on the UCT campus not more.

They called themselves the ‘Staff for Social Justice in Education’ and the article effectively called for the absence of police on our campuses when criminal acts such as arson, and assault and damage to property and attempted murder and relentless intimidation were, as we know and they knew, occurring.

The article was headlined Stampede for securitisation of UCT clouds logical argument.

Fast forward to 7 August this year and, in response to questions posed in parliament by the Democratic Alliance, the Minister of Higher Education and Training, Naledi Pandor, reveals the logic of the above-mentioned members of the ‘Staff for Social Justice in Education’ and their vehement opposition to police responding to criminality on the UCT campus.

The presence of the police on the UCT campus in response to the murderous criminality of the anarchic Fallist vandals – described by Jonathan Jansen as ‘fascist’ – restricted the damage to R2 million.

These amounts obviously do not include the reputational cost to UCT of the ‘Whiteness Burning’ article in The Economist which is read by opinion formers all over the world.

Furthermore, this was not the total cost as Professor Belinda Bozzoli points out:

This is not even the full cost of this period, as Universities and Colleges have also had to bear the costs of extra security, repeat classes and exams, and many others, while many students have lost considerable study time as a result of long closures of their campuses.

It is urgently-incumbent upon the above-mentioned members of the ‘Staff for Social Justice in Education’ to respond to the questions relating to UCT which are posed by the Pandor report.

It is not as though the obsequious Fallist supporters at UCT were unaware of their murderous intent and their motivating ethnic hatred.

Three incisive essays by one of their colleagues, Professor David Benatar – himself a victim of ethnic slurs – raised trenchant concerns which, had they been heeded, might well have averted the tragic loss of Professor Bongani Mayosi:

The latter article, in particular, sets out in clinical detail the violent intimidation by the Fallists and the pervasive fear which resulted from their viciously cruel depredations on students and academics alike which were, in substantial measure, motivated by and grounded in the promotion of ethnic hatred.

That fear was chillingly described in the responses to the GroundUp article in which the above-mentioned members of the ‘Staff for Social Justice in Education’ called for a lessening of the police presence on the UCT campus:

When I read something like “the protests were disruptive but not violent. The faculty had to pause, but no students were beaten by police, no staff members were assaulted and no property destroyed…”, it makes my bile rise, my blood pressure soar, and gives me pause to consider just how cravenly apologetic some of my colleagues are.

Seriously? “Disruptive but not violent”? Staff trying to give tutorials who are shouted down mercilessly, spat upon, and run out of classrooms, is not violence? The windows and doors of offices and laboratories in Werhner Beit North on UCT Health Sciences campus that were cracked and broken “because we were trying to make a noise” is not violent? Intimidating a newly-arrived senior researcher in his office so that he goes home AND tells his staff to do so, is not violence?

There will be a huge psychological toll to pay because of the disruptions, and yes, the violence – and it will be the staff and students that tried to carry on who will pay the most.

As another academic based in UCT who has been terrorised by the protesters, I am aghast at the utter misrepresentation of events on campus by London et al. I quote from their piece:

“It was disruption that achieved a strategic goal without violence, injury or destruction of property. It also built a measure of trust between students and management that, while fragile, is important for the collaborative work that must be done to address reasonable demands. “

The “disruption” is in fact intimidation and outright destruction of property. Consider the burning of four vehicles on campus, for starters, never mind the massive burn marks on Jameson Plaza and the hideous violence visited upon the security guarding the library in October. One simply needs to watch the attack on a helpless man to get an idea of the thuggery we at UCT have been exposed to. Consider the video of the new leader of #FeesMustFall, Ntokozo Qwabe, hitting a student with a “protest stick” as well as the use of fire extinguishers and clubs to clear classrooms! One might also note that a bomb threat was levied against the UCT Creche and numerous members of staff, including support staff, were threatened in their offices.

This is the norm. This is how the protests are carried out. There is no such thing as peacefully clearing a building. The protesters do this by setting off fire alarms, screaming, threatening and making it impossible for people to do anything other than their bidding … or else. Death threats have been levied against staff in the Chem Eng building, for instance. To argue with the protesters is to face their destructive wrath, intimidation and violence. I myself was attacked while attempting to drive my car to campus. I was called “A fucking white man” and “bitch” and told they “knew where my office was” while they banged on my car in unison. So there is simply no way I will accept that these protests are in any way peaceful.

The denouement came at the funeral of Professor Bongani Mayosi when his bereaved widow and sister denounced the role that the murderous Fallist vandals had played in his persecution and ultimate death.

In anticipation of that backlash, a leading member of the ‘Staff for Social Justice in Education’, Dr Lydia Cairncross, wrote what I regard as a cynical, pre-emptive whitewash article.

In my subjective opinion the ultimate contempt is reserved for former Vice Chancellor Dr Max Price because it was on his grovelling watch that the anarchic Fallists were not only pardoned but had their criminal deeds expunged from the record.

This despite the fact that judicial testimony to that criminality was handed down in three of our courts, the Cape High Court and the Supreme Court of Appeal and the Constitutional Court.

Unsurprisingly, those who Price strove to placate, tormented him to the end and, all the while, they expressed their innate ethnic hatred.

A plague o’ all your complicit houses.

Look upon what you have wrought.

May the untimely death of Professor Bongani Mayosi rest heavily upon your collective conscience.

In a previous article on this website, I pointed out that the Nusas leaders of the university protests of the 1970s and the 1980s – people like John Daniel and Duncan Innes, people like Neville Curtis and Andrew Boraine, people like  Halton Cheadle and Glenn Moss – never tried to murder anyone and were not motivated by ethnic hatred.

That article was written in response to a contention by Lorna Houston – President of UCT’s Convocation and a representative on UCT’s Institutional Reconciliation and Transformation Committee steering committee – that ‘institutional racism’ was a pervasive and accepted norm at the university.

I would welcome her comparison of how that alleged ‘institutional racism’ compares with the vicious and ultimately fatal persecution endured by Professor Bongani Mayosi when the loutish Fallist bullies were occupying his offices and preventing him from working.

At the end of the article I posed a number of questions and said that Biznews would be happy to record her responses. She did not respond and maintains  a troubling silence.

Among those questions was this one:

I now pose the same question to the 31 members of the ‘Staff for Social Justice in Education’ who signed the above-mentioned response to Judge Dennis Davis because all of them are doctors or employed in the field of health care – just as the late Professor Bongani Mayosi was.  Did you, in good faith and in keeping with the compassion that your calling enjoins, visit and comfort the seriously-injured security guard at his time of Fallist-induced crisis?

I would particularly welcome a response to this question from Dr Lydia Cairncross.