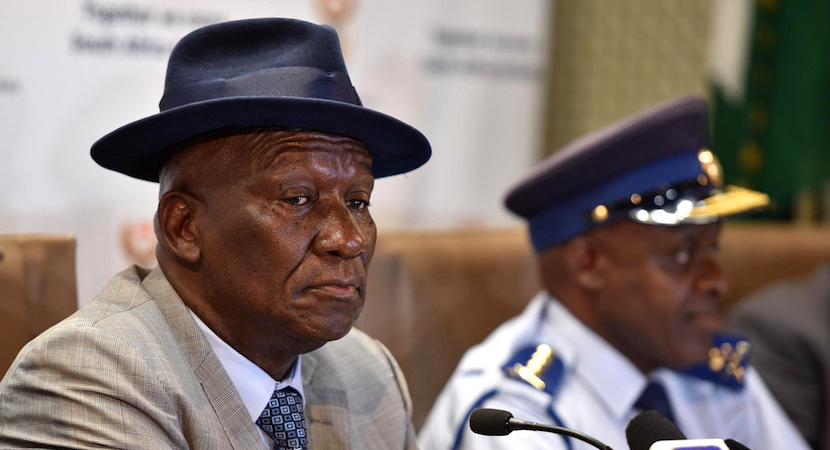 CAPE TOWN — Accountability Now Director, Advocate Paul Hoffman, SC, is calling long and hard for the outlandish, fedora-hat-wearing police minister, Bheki Cele, to be brought to book after two impeccable probes found him, inter-alia, dishonest and incompetent. First, Cele was roasted by former Public Protector, Advocate Thuli Madonsela for negotiating leases for police headquarters at three times the going rate and ignoring procurement rules. Then the Moloi Board of Inquiry into his fitness to hold office pronounced him dishonest and incompetent, leading to then-President Zuma firing him. This sacking was set aside by the High Court after a curiously unopposed review, and Cele was reinstated – and then promoted. Now he bumbles on, looking for all the world like rough and ready Mafia boss, seemingly protected by none other than President Cyril Ramaphosa. Hoffman asks with total rationality and some incredulity, how on earth this fits in with the president’s commitment to tackle corruption and the culture of impunity? If the current discredited Public Protector and the police can’t/won’t investigate and parliament’s relevant portfolio committee and the NPA remain eerily silent, where else must the buck stop? – Chris Bateman

In the past, Accountability Now has had occasion to cross swords with the Public Protector in relation to her mishandling of the Ciex complaint (also called the lifeboat case) in which she startlingly and inappropriately sought to force the amendment of the Constitution as it impacts on the role of the Reserve Bank. The matter was eventually referred to the Justice Portfolio Committee after the Public Protector refused to investigate herself, when in fact all she was being asked to do was to account for her apparent mendacity in relation to the dissemination of a preliminary report. She was referred to the golden thread of accountability which ought to be in place wherever the rule of law is respected and upheld.

The matter is pending as the committee does not regard the probity and integrity of the Public Protector as a problem deserving of its attention as a matter of priority. The real explanation for its supine attitude is that the Public Protector, at least in the fifth parliament, was given “royal game” protection by the governing alliance due to the closeness of her relationship with then president Jacob Zuma. The sordid details of the referral of the matter to the committee can be found here.

As Ms Jiba, formerly of the NPA, has learned to her cost, the current president does not take kindly to being lied to by advocates: nor should he. The integrity and honesty of the Public Protector should be beyond question, and when questioned the matter should be dealt with diligently and without delay, which is what the Constitution expects of the committee. This high standard is clearly not what the ANC expects of its deployees in parliament.

More recently, it has been reported that Zuma’s dismissal of Bheki Cele as his National Commissioner of Police was set aside on review, curiously so, on an apparently unopposed basis. His dismissal followed the recommendation of the Moloi Board of Inquiry which saw the light of day due to the report of the previous Public Protector into the irregular leases for police headquarters in Pretoria and Durban.

It will be recalled that the Sunday Times reported that the leases were negotiated by Cele at about three times the going rate and without regard to procurement requirements. The Public Protector inquired into the matter and produced two reports, “Against the Rules” and “Against the Rules Too”.

Part of the binding remedial action required by the Public Protector was that the SAPS and Minister of Police investigate the matter and take steps to prevent its repetition. The Moloi Board also recommended (in a non-binding manner) that the appropriate authorities look into the commission of corrupt activities in relation to the unlawful leases which had been declared invalid by the Public Protector. The Moloi Board was not empowered to subpoena persons and documents relevant to the corruption aspect of the matter and the OPP was unable to establish any corrupt activity due to lack of evidence.

Obviously, when leases are negotiated at about three times the going rate for rental in respect of the premises in question the smell of corruption strikes the nostrils of any sentient being rather pungently. Cele’s exalted status in the ANC has given him immunity against investigation thus far; he graces the cabinet in the Ramaphosa administration despite his roasting by the Public Protector and by the Moloi Board which found him to be “dishonest and incompetent”, findings apparently ignored by Ramaphosa, unless he wants ministers of that ilk, but acted on by Zuma who fired Cele.

In its endless quest for accountability, the complainant in the original Ciex complaint, Accountability Now, has written to the Public Protector and to its member of staff who was responsible for the “Against the Rules” reports in the following terms:

An investigation by the OPP into the propriety of leases for police headquarters conducted in 2010/11 by the former PP, Adv Thuli Madonsela, and Adv Stoffel Fourie made provision for remedial action and monitoring in sections 20 and 21 of the report (which is on your website) after finding that the Pretoria lease agreement was invalid in section 19. Similar outcomes were reached in the follow-up report called “Against the Rules Too” which applied to the Durban SAPS headquarters.

We are interested, as a complainant in the matter, in the outcome of that which is set out in section 21.7, 21.8 as read with section 22.2 of the report numbered 33 of 2010/11. In particular we require electronic copies of all reports received by your office from SAPS and the Minister of Police as specified by your office as part of the remedial action that the investigation required.

Our concern is that agreeing to lease premises using public money at about three times the going rate would appear to be prima facie corrupt, but nothing seems to have been done to address any possible criminality in the matter for want of sufficient evidence. The SAPS, or IPID, are surely well-equipped to investigate so simple a matter and to report back to the OPP on their progress.

You will recall that the Moloi board of inquiry into the fitness for office of the then National Commissioner of Police found him to be incompetent and dishonest. That board also recommended that a proper corruption investigation should follow, as it had not been empowered to subpoena the landlord and the relevant documentation concerning the excessive rate agreed in respect of rental of the leases.

President Zuma dismissed the Commissioner on the basis of the Moloi Board’s recommendations, but his decision to do so has apparently recently been set aside in unopposed review proceedings in the Pretoria High Court. We have no details of this surprising and very late development apart from what we read in the press.

You will appreciate that the remedial action specified by the OPP is binding on SAPS and the Minister. It is also manifestly inappropriate that the current Minister of Police (who was then the dismissed Commissioner) should hold political office if a proper investigation reveals that he was involved in corruption in the negotiation of the leases in question. It would be untenable to have such a person as political head of SAPS or even as a political office bearer of any kind. A proper accounting in respect of the excessive rates agreed upon both in the Pretoria and Durban invalid leases is still outstanding. The reports required by your office (and now from you by us) may be an appropriate starting point to clearing up the prima facie indications of possible corruption in the deals negotiated with Mr Roux Shabangu. If no reports were furnished, please explain why.

No response has been received to this request, nor have subsequent media inquiries borne any fruit as at the time of writing.

The notion that the Ramaphosa administration is genuinely attempting to clean up corruption, to recover misspent public money and to end the culture of impunity that the corrupt have enjoyed during the “wasted Zuma years” rings hollow if the inwardness of the appointment of Cele as Minister of Police and his protection against investigation, even now, are taken into consideration. He was the butt of the two reports of the Public Protector and was declared dishonest and incompetent by the Moloi Board of Inquiry. If there was no follow up by the then Minister of Police and the SAPS itself, as required by Thuli Madonsela, then untoward protection is being afforded to Cele. As the NPA had no investigative capacity at the time, it cannot be blamed for not instituting criminal proceedings in respect of the corruption apparently evident in the high rentals negotiated. However, the NPA now (post Zuma) has been given investigative capacity by the president, and some encouragement to investigate sitting and former cabinet members as a matter of priority so as to demonstrate its independence.

If the cupboard is bare at the OPP, then it is high time that a proper investigation into the corrupt debacle of the police headquarters leases be effected by the NPA. The SAPS and the minister himself are obviously too conflicted to be involved in any credible investigation, other than as suspects.