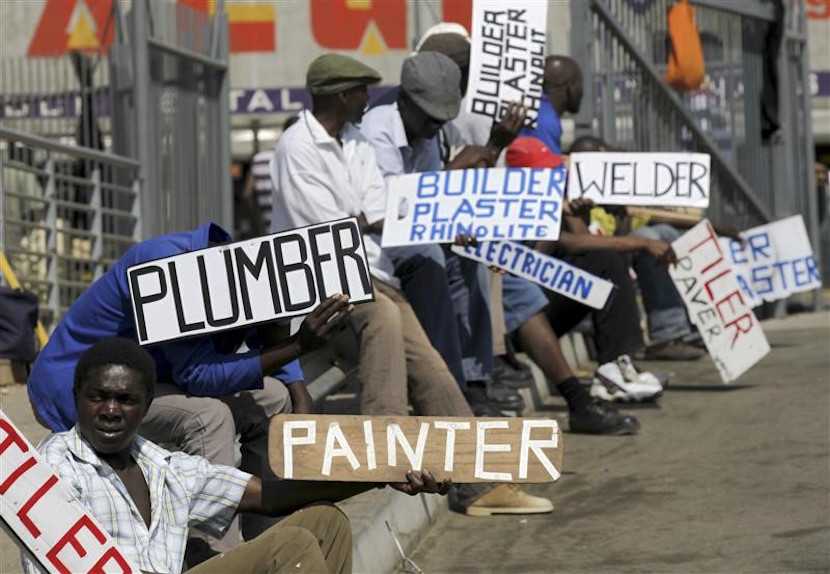 High unemployment is often quoted as the reason for emigration from South Africa. But, look beneath the official statistics and you will see a vibrant economy built by tens of thousands of small business operators and entrepreneurs. This is the message that GG Alcock, who calls himself a white Zulu after being brought up in a rural community, is bringing home to economists. His number-crunching makes for fascinating reading. Looking at the details of the street vendors and small-time landlords, the incomes being generated are fairly impressive – and certainly not just subsistence living. GG Alcock reckons it is time to take a fresh look at the South African economy and realise that the statistics being bandied about cannot be true. – Jackie Cameron

In the crescendo of shock and horror about unemployment of 29% I must disagree with these numbers.

These numbers should be prefaced by the word “formal” unemployment.

I have written about the huge scale of informal businesses at some length in my books Kasinomics and Kasinomic Revolution. There are a multitude of informal and kasi businesses – some small, some pretty large – which are not measured in unemployment stats.

This is for a few reasons why they are not considered:

In a recent Kyknet show on the informal economy and youth unemployment the programme asked me to assist them to interview some young entrepreneurs. One I connected them with was a lady from Limpopo who sells vetkoek in downtown Joburg. This young 24-year-old sells 6,000 vetkoek a day for R1 each and employs 5 staff, one her brother. She turned to vetkoek selling because she could not find a formal job. She definitely was not measured as employed in the stats nor were her 5 staff.

What about income generating activities, are these viewed as jobs? I wrote in Kasinomic Revolution about a gogo who earns around R1,600 a month in old age pension. Yet she rents out a shisanyama and a hair salon in front of her little house for R1,500 each and three backrooms for R1,200, R900 and R900. So, she earns an additional R6,000 a month from rental. Let’s briefly look at the kasi rental sector. The immigrant spaza sector rent their stores from South Africans, paying between R2,500 to R25,000 for the store rental depending on the size. I estimated the rental income to South Africans is in the vicinity of R30bn a year. That’s a lot of good money being earned. Pity this is not featured in xenophobic rants about immigrants taking jobs.

And backroom rental? Practically every single township home has a back room, a garage-sized room rented or occupied by extended family and often a mix of both. I estimated that over and above the rental of spazas, backroom residential rental brings in another R20bn a year.

So are the more than 20,000 hair salon owners employed or are their stylists who in kasi style rent stations from the salon owner in a gig economy type arrangement. They are not employed but each stylist who rents a station in the salon is self-employed making anything from R5,000 to R15,000 a month in styling, nails, extensions etc.

What about the fast food sector in the townships, what I call kasi kos with 50,000 outlets selling kotas, amaplati, inhloko, isibindi, isishebo, burgers, chicken dust, mogodu. A sector employing 200,000 odd staff “informally” and turning over in excess of R85bn a year. Are they all unemployed?

Or the muti sector, inyangas and sangomas dispensing herbal plant based concoctions estimated in 2004 to be worth R3bn a year and employing 150,000 plus herbalists.

What about the school mamas, the school tuckshops of the townships, I wrote in Kasinomic Revolution of a lady in Thembisa who has been selling food and snacks at the same school for 26 years, earning R6,000 a month in profits. She has put her two kids through university and her husband has been unemployed the whole time. There are 12,000 odd township schools each with 5-8 school mamas, if each only earn R3,000 a month (the minimum wage for domestics) then that is a sector worth easily R2bn a year in incomes. But these school mamas are unemployed, aren’t they?

I am not even going to mention the auto sector with its kasi mechanics, panel beating, car washes etc.; nor the tavern sector; nor the township building and support sectors such as electricians, plumbers, builders, tilers; nor the internet cafes or goat farmers; I can go on.

We are NEVER going to create a million jobs in the formal sector no matter how many electoral manifestos or government promises are made in this regard. Initiatives like the YES programme are designed to encourage mentorship, internship and job learnership opportunities in the formal sector which is shedding jobs. Why would you get a job shadowing or intern opportunity at Standard Bank while they are closing branches and retrenching staff as an example. WTF.

The informal sector is remarkably similar to the gig economy. While governments and municipalities are trying to regulate or limit AirBnB, Uber etc these are the economies of the future which should be supported (and taxed) as the future employers and economies.

The informal sector is where the opportunity is, we need to bring the informal economy into the formal economy, not by formalising but by creating fostering and growth environments.

My simple starting point and three steps to addressing formal unemployment is about growing and giving security to the informal sector so that it can grow, so that it can formalise, so that the participants have security and thus invest more into their businesses, and so that there is an incentive for this economic sector to pay rent, tax, PAYE etc:

I reckon real unemployment i.e. where the person has no income generating opportunity or income for any form of permanent work, is probably closer to 12%. Prove me wrong if you can?

Instead of banging our heads against the formal sector wall doing the same thing over and over expecting a different result why don’t we look for solutions which assist the largely informal Kasinomic sector? The economy does not belong only to the formal sector. Prepare for a Kasinomic Revolution.